It’s arguably one of the best times for someone to read comics. In the last year, numerous creator-owned hits have topped the charts, while Marvel and DC continue to produce some of the best series in recent years. All in all, it’s a wonderful time to be a comic reader. But, what if you’re new to comics and want to start reading? Fear not, for out of the dozens, possibly hundreds, of comics that hit the shelves each week, there are always at least a few geared towards complete comic beginners. Without further ado, let’s check out some of these Comics for Noobs, both Big 2 and indie! 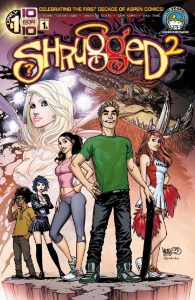 Each human is assigned a representative from the world of Perspecta, one each from Elysium and Nefaria. Elysium is the stereotypical “good”, while Nefaria is the “bad”. The representatives attempt to influence their human’s decisions, often leading to some arguments. Shrugged follows the teenager Theo and his assigned representatives, Ange and Dev, as they’re forced to deal not only with Theo’s problems, but also problems back in Perspecta.

Theo starts his senior of high school as Ange and Dev discuss the previous year’s exploits. After we’re all caught up, Theo gets to school, catching up with friends and being assigned a new lab partner. In Perspecta, while Elysium and Nefaria seem to be reasonably peaceful with each other, trouble is brewing.

The first few pages were pretty standard “catching new readers up” content, which was done well, and the panel layouts directed the conversation perfectly. The overall writing is pretty standard, but manages to keep the reader interested as characters new and old pop in and out of the story. A love interest is introduced and the reader is left wanting the next issue. The art is to be praised as it portrays well both the entirely fantastical inhabitants of Nefaria and the teenage kids that Theo calls friends.

The introductory pages help get new readers up to speed very quickly, while managing a pretty good introduction to the world as a whole. All in all, it’s a fun read with a good basis for new readers. 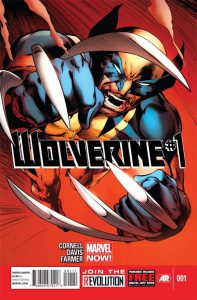 In Marvel’s ongoing attempt to make sure Wolverine doesn’t have time to sleep, he’s now appearing in yet another book. It’s a solo adventure for everyone’s favorite clawed mutant as he gets out of his comfort zone and acts like a true hero.

Wolverine is in the mall when a terrible hostage situation erupts. A man seemingly goes insane, taking hostages with an advanced weapon and killing them one at a time. It’s only after being blasted a couple of times himself that Wolverine is able to stop the man, forced to kill him in front of his son. In the aftermath, the man’s son suddenly starts firing the weapon and escapes. Wolverine vows to get to the bottom of this mystery, making sure no more life is lost.

In this issue, we see Wolverine not as the berserker killer, but as the calm headmaster that he’s become in recent years. He goes out of his way to try and calm the boy, being overly nice and trustworthy. He acts like a true hero, rather than his usual brutal, anti-hero origins. It’s a side of Wolverine that we’re often not treated to, a Wolverine out of his comfort zone, but it’s a great look at one of Marvel’s most popular characters.

The simple, stand-alone story is a great way to ease new readers into the larger Wolverine/X-Men universe. This issue serves as a great starting point for a series and ensures that many readers will be picking up issue #2 next month. 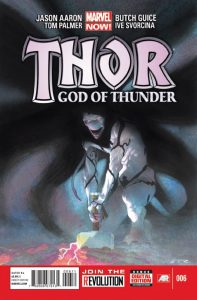 A new arc is started with this, and it delves into the origins of Gorr, the God Butcher. This mysterious alien being has traveled through time and space to kill all the gods, prompting Thor to do the same to stop him. In this issue, we finally come to know just what drove Gorr to his hateful quest of vengeance.

Gorr’s story begins on a planet with no name. His mother is killed while calling to the gods for help. Later, his wife and son are also slain while trusting in the gods to save them. He and his people starve while they wait for their salvation. Gorr finally can’t take it anymore, blaspheming against his absent gods and causing him to be outcast. In his exiled wanderings, he comes across two gods locked in battle. After he picks up a black shard of great power, Gorr kills his first god and begins his journey. Millennia later, Gorr has Volstagg and other gods enslaved as they build a machine of ill intent for him.

Jason Aaron continues his impressive run on Thor and does so without a singular appearance of the Norse god. It’s the strength of Gorr as a flawed character that carries this issue, along with the astounding art. Gorr might just be one of the best things to come out of Marvel NOW! and I hope he stays around for a while.

New readers might be confused by the lack of Thor, but should be okay. It’s a story that doesn’t necessarily need tons of background, as it’s an origin story. It’s a great introduction to Gorr and his motivations.

The Triggergirls are a line of assassins genetically modified and made specifically to kill the hardest to reach targets. When one such assassin attempts to kill the President, things go awry. She begins to wonder of her purpose and searches for her origins. What she discovers is something she finds hard to understand and that will change the world.

Originally appearing in Creator-Owned Heroes, Triggergirl 6 has finally been collected all into one issue. The art by Phil Noto still impresses as does the story by Jimmy Palmiotti and Justin Gray. Though the ending will leave many readers surprised, it’s an ending that is fitting but also comments on the state of the real world. It’s action, it’s commentary, it’s drama, it’s just good.

As a self-contained story, new readers should be just fine. With no prequels, sequels, spin-offs, or crossovers associated with it, this comic is a great read for a new reader who is looking for something outside the normal superhero fare.