I missed last week, but let’s not dwell on that. A ton of great comics came out this week, and there just so happens to be quite a few that are new series/starting points. So, let’s get started with The Wake #1!

The Wake #1 published by DC/Vertigo Comics 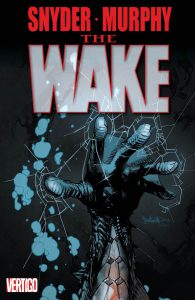 From Scott Snyder and Sean Murphy comes a horror/sci-fi book quite unlike any other. When marine biologist Lee Archer is asked by Homeland Security to help with a new threat, she’s reluctant, but knows they won’t take no for an answer. She’s whisked away to the Arctic and taken deep beneath the water to an illegal underwater oilrig where they’ve discovered something extraordinary and terrifying.

Snyder is no stranger to horror as many of his books, even the ones not really classified as “horror”, have delved into the genre. And Murphy is perfectly at home drawing machinery and sci-fi inventions, as well as underwater scenes. Lee is portrayed as a realistic and strong female character, while she obviously isn’t meant to be just for the sake of it. The story jumps across 100,000 years of human history, and ends not on the “big reveal” of the issue, but rather 100,000 years in the past with an early man making strange cave paintings, hinting at an even earlier and more sinister beginning for this strange tale. The story is obviously very large, and this issue is just a taste of it. These are the sort of stories we need more of.

It’s a first issue of a new book from an amazing creative team who have consistently delivered high quality work. It’s safe to say that new readers could easily pick this up, and very well should. Fans of sci-fi and horror will definitely feel at home reading this book, which will expand across ten issues to bring a truly epic story. 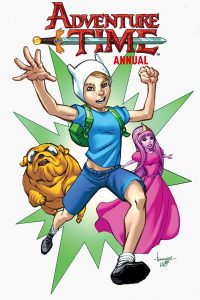 Once again, we’re in the land of Ooo as Finn and Jake go on all sorts of adventures. This annual is full of six different stories from talents such as Dustin Nguyen and Roger Langridge. It’s a great mix that has rapping, lemon picnics, board games, the alphabet, and, of course, best bros.

There are roughly a dozen people to mention, so that makes it hard, but I do want to say that the consistency of the storytelling and art was great. While each story had its own style, it still meshed together well with all the others. Everything was fun and cartoony and felt like a perfect fit for the show. The story written and illustrated by Alex Cox probably best captured the dynamic between Finn and Jake. Even when presented with the coolest sword ever and the prospect of the being the strongest of the strong, but having to give up Jake’s friendship, Finn always picks friendship, because that sword is just wack. 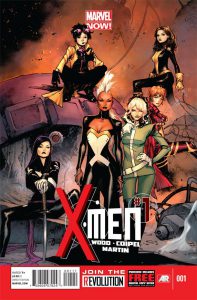 Brian Wood and Olivier Copiel bring an all-female team of X-Men together as this book kicks off this month. Jubilee thinks she’s rescuing a baby orphan, but things are really much more dangerous. Rouge, Storm, and Kitty Pryde jump to help her, just before it’s revealed who the baby really is. John Sublime makes an appearance as the danger is very much related to him.

The story that Wood makes is an interesting one. It introduces a new threat to the universe, but ties it into one that many new readers would be unfamiliar with. Even so, it’s a good introduction to the conflict and the art by Copiel is gorgeous. The opening pages with the bacterial evolution overlayed on the current events really helps bring some of the connections home. It’s cool to see Wood helming a 616 X-Men title, so that’s always welcome.

For new readers, use caution. There are going to be multiple characters that you’ve never heard of, with little to no explanation for them. That is what happens when you read X-Men comics. Even so, with a little research and some back issue reading, this story is perfectly enjoyable for anyone. 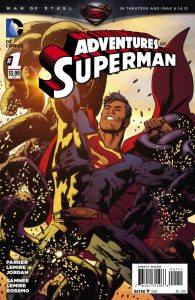 Another DC book this week, but it couldn’t be helped. This is the first issue of the digital-first non-canon Superman stories that have been on Comixology. Featuring three different stories of different styles and sorts, we see Jeff Parker and Chris Samnee as they show Superman’s first encounter with Lex Luthor‘s work, Jeff Lemire has a childish game that pits Superman against Zod, Brainiac, and possibly even Luthor, while Justin Jordan and Riley Rossmo give Bizzaro his worst day ever.

All three stories are fantastic, but Lemire’s story and the Jordan/Rossmo story really stood out to me. Lemire captured the childhood innocence that was so inherent in comics once upon a time. And Superman embodied that. He was just, noble, and wholesome, and the good guy always won. The story by Jordan and Rossmo was something to see. Riley Rossmo’s usually loose and emotive art was reigned in here, and it looked fantastic. The small touch from Jordan of having Superman’s superbreath be loud like a tornado was fantastic and even had Mark Waid jealous.

These stories are not confined by stuffy storylines or any sort of canon. The creators were free to play around with Superman and his mythos, and it came out wonderfully. A great read for any readers new to comics and looking to start with something that’s somewhat familiar.