This week’s Comics for Noobs focuses on 1’s and 20’s, for some reason. New series are popping in the independent companies and new arcs and creative teams are taking over books at the Big 2. It’s a great mix so let’s jump right into it with Chin Music #1! 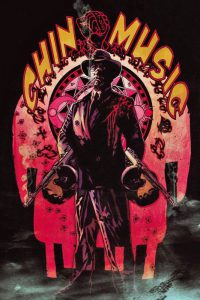 Steve Niles and Tony Harris bring forth what appears to be a supernatural detective story, but one that’s very different. For the first five pages an unknown man silently cleans his gun and etches bullets before we’re taken to Egypt in a flashback. In Egypt we see two men argue before a chase breaks out and it’s shown that these are more than just normal men. After one man is captured and stripped to his skeleton, he’s left to die, only to be found by Eliot Ness. The story then jumps back to the present as a much different looking Ness finishes cleaning his gun, before we’re taken to a scene where Al Capone is consulting his crew. It doesn’t end well for Capone.

There isn’t a lot of actual development going on in this first issue, but rather a lot of seeding. We see that Ness has changed, but don’t know how. We find out about the men in Egypt, but never see what happens next. There are lots of mysteries left at the end of the book. Niles is more than capable of writing supernatural stories, so I’m sure it’s in good hands, even if the lack of real development turns some readers off. Harris’ art is fantastic and his page layouts are unique, giving a different, but overall great, sort of look and flow to the story.

The lack of real development could turn off some readers, but this story seems to be worth the wait. Niles and Harris have both been responsible for great work, so their is faith in the creators. Plus, the addition of a supernatural Eliot Ness makes any book worth a read. New readers could find a great read in this book if they can wait for the mysteries to be revealed. 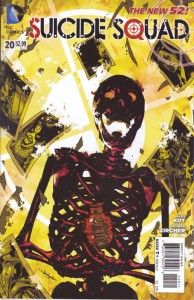 Ales Kot makes his DC debut with this issue of Suicide Squad. An unknown narrator gives his thoughts on a plan that Amanda Waller has in store for the criminals that make up Suicide Squad. Each goes on dangerous missions to shave years of their sentences, and it seems Amanda has even more in store for them. Deadshot, Voltaic, Harley Quinn, Unknown Soldier, and King Shark are all going about their days before Amanda and her new recruit enact a plan that ends with Voltaic dead and a new addition to the team.

Kot is known for his extremely smart writing and borderline insane stories, and he seems to manage to do this while working within the constraints of a DC book. The art by Patrick Zircher adds a lot to the overall story and helps give it a sharp look. The sinister things that Ales has in store seem to be trouble for the team and it could be lots of fun for the readers.

New readers can jump right into this book. I’d never read a single issue of Suicide Squad before, but found myself right in the story. The narrations and recap page give a good introduction to the series and characters, while not bogging down the overall story. All in all, it’s a great read. 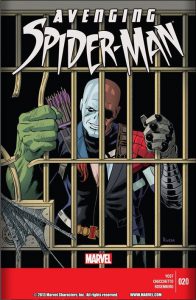 Spider-Man is after the Chameleon in this issue, but it seems that some shady Russians are as well. Spider-Man plans to break into the S.H.I.E.L.D helicarrier in order to liberate the Chameleon, but some Russians mercenaries are on the way to kill him. The plans collide and Chameleon escapes. Now, Spider-Man will seemingly have to work with Hawkeye, Black Widow, and maybe even The Hulk in order to track down the escaped criminal.

Chris Yost does a good job of writing the inner monologue of Doctor Octo-Spidey and Doc Ock attempts to “act natural” and make a few jokes around the Avengers. It’s this touch that not only makes the reader aware of the difference, but the other characters as well. Marco Checchetto’s are is very solid. It captures the classic Spider-Man look well, and gives a great sort of design to the other characters. Hulk in particular looks menacing and is really captured well.

New readers, assuming they’ve seen The Avengers, might be alright. The fairly large cast of characters makes it a bit difficult for anyone who has no basis in the history, but it’s still a good read. 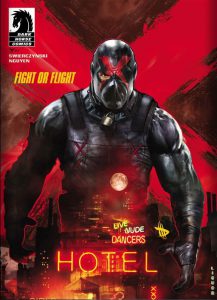 Dark Horse’s violent anti-hero is back again this month in the #1 issue of his new series. After the events of #0, X has drawn a bit of attention to himself. Everyone from the police to newspapers to bloggers have begun to take an interest in X. After another businessman is marked, the police set up a trap for X. After a firefight and more than one explosion, X is left in a dumpster, begging the reporter who has been following the events to help him.

Duane Swierczynski makes the story much more than just violence. There is a great mystery to who X is and why he’s doing what he does. It’s only further deepened by how shady the police act. X rarely appears in this issue, but still manages to have the story solely focused on him. The art by Eric Nguyen is gritty and dark, perfectly fitting this story. In a grimy city full of grimy people, this is the sort of art a story needs.

New readers can jump into this series still. And it’s highly recommended. Though it’s a violent, dark superhero story, as many others are, there is a certain sense of mystery to it all that makes it more than just another one of the same. The eventual payoff could be great.