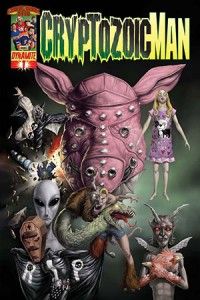 The brainchild of Walt Flanagan and Bryan Johnson of AMC’s Comic Book Men, Cryptozoic Man follows Alan Ostman as his life quickly changes. After his daughter goes missing on a camping trip, Ostman is later abducted by Grey aliens from a roadside bar and learns that the fate of the world depends on capturing cryptids from all around the world. And he has to combat a psychopath in pig-shaped bondage mask.

To start with something positive, Cryptozoic Man had some nice art. Walt Flanagan and Chris Ivy did a good job on line art, while Wayne Jansen‘s colors looked great. This can’t save the book, though. Everything else, though, was a bit less well done. The story is extremely muddled and unclear. It at first comes off as a bit of an Animal Man rip-off/homage, but it’s unclear whether it’s an actual, serious story or something completely ridiculous. None of the characters are adequately introduced, with no clear motivations or backstory, leaving the reader feeling more than a little confused.

New readers, steer clear. This is going to be nothing but a disappointment. While it’s an interesting premise, it’s just not well done at all. It’s going to leave you more confused or disappointed than anything. 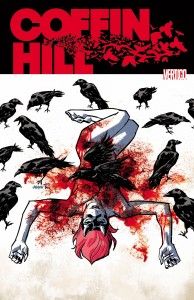 From Caitlin Kittredge and Inaki Miranda comes Coffin Hill, a story of rookie cop Eve Coffin as she solves the crime of the decade, but returns home after a gunshot wound. Home, though, is anything but welcoming as it has lots of history with it. History involving a night in the woods that ends with Eve naked and covered in blood, one friend in a mental institution, and another that knows Eve is responsible. As the solicit says, it explores what people will do for power and retribution.

The story is interesting, mixing some good, old supernatural with what will surely be something of a crime drama. Miranda’s art is great for the book, being dark and moody, and having clean, sharp lines. This first issue acts as a great introduction and setup for the overall story, introducing the main characters and setting up the central conflict while not bogging the reader down with too much backstory.

All in all, this is a great first issue. Great story, great art, great introductions to an interesting concept. Any readers looking for something of the supernatural sort, while also having it rooted to a great story are definitely going to need to pick up Coffin Hill. 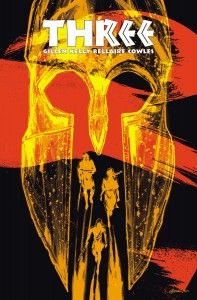 From Kieron Gillen and Ryan Kelly comes Three, a story quite the opposite of 300. It centers on a group of three Helots, Spartan “slaves” treated as sub-human and killed as part of Spartan rites of passage, who must try to escape from 300 of the finest and most fearsome warriors in history after a violent and bloody massacre on a Helot homestead. It’s one of the best underdog story concepts to grace comics this year.

Kieron Gillen doesn’t seek to tell an alternate history story, but rather one of historical fiction. As a history lover, this is very, very welcome. Ryan Kelly’s art is well suited for the story, being expressive and detailed, capturing the looks of defeat and sorrow on the Helots’ faces and the cruel looks of the Spartans. Colorist Jordie Bellaire, of course, deserves credit as her colors always make any book she works on considerably better.

This is a great comic for a new reader to pick up, especially if they’re looking for something outside the normal fare of comics. Historical fiction comics are not the most common things in the world, so it’s nice to not only see one, but see one that’s obviously done extremely well. 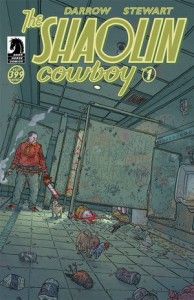 Geoff Darrow returns with his unique protagonist in a new volume of Shaolin Cowboy, this time from Dark Horse Comics. After returning from the center of the Earth, the Shaolin Cowboy must deal with a zombie horde and drunken punks, in what is largely a plotless sort of story, just the cowboy meandering through a desert landscape, but things are sure to pick up.

Darrow both writes and draws the story, including the over the top two-page prose piece in the front of the book. Still, there doesn’t seem to be a whole of lot of serious story going on, and that’s okay. Darrow’s beautiful, detailed art makes this comic what it is and that’s all it needs. It’s intricately detailed and that shows in each and every page.

New readers can pick this up, but it might not be to every reader’s taste. It’s over the top and wonderfully strange, not quite like most comics around. It’s the first issue in almost a decade, so it’s nice to see things picked up again. If nothing else, the art is worth the price of the book.