Jan 14, 2020 by Tony Dillard    Comments Off on Creator’s Corner with Craig Rousseau, Artist of KILLING RED SONJA    Posted In: Reviews

We’re back once again with another creator’s corner where we ask a comic book creator some questions in between their deadlines, and ours. This time it’s an artist I know fairly well since I’ve had the honor of meeting him a few years ago at not my local comic shop (Sorry, Randy), but a fairly local one in Bellingham, MA during a big event at most shops, #FCBD (Free Comic Book Day) 2013, Craig Rousseau. I believe Craig Rousseau and Jack Purcell were special guests during the event, signing and doing quick sketches. I was able to have Craig sketch me a Joker. I loved it (and still do). So I was excited to see his name pop up on a press release from Dynamite Entertainment on this new companion mini-series called Killing Red Sonja! We haven’t interviewed anyone on a DE project for a while, so even though I kind of knew him I asked Vincent over at the DE offices if we could set something up and talk a little bit about the series and see what’s going on with Craig.

This new story is based around the pre-existing lore of Queen Sonja. Before she could become the queen she had to usurp the current ruler. That’s where things get a little tricky. on one hand, we have an evil sorcerer and on the other, we have Red Sonja slayer of evil and pretty much anyone that takes up arms against her. So the aforementioned now-defunct sorcerer had a son who is hell-bent on revenge and that’s where the first issue will take place. but for now, let’s check-in with Craig and see what’s going on in his artistic world. I hope you enjoy our little conversation and that the questions asked you to find at least somewhat interesting. 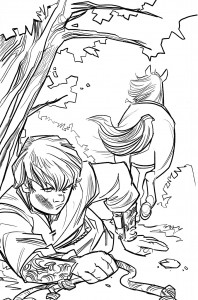 OG) Tell me how this project came about, we’re you doing any work for Dynamite Entertainment previously? I know you’ve worked for many publishers over the years.

CR) To be honest, I knew my old editor from my days at Marvel, Nate Cosby, was putting out some fun books over at Dynamite and asked him to keep me in mind if anything came up.

OG) Had you worked with this writer and colorist before?

CR) I came into this book not working with any of the creative team before, but I’ve been a big fan of Mark Russell’s work for years (Prez, The Flintstones, Snagglepuss, Wonder Twins), so I jumped at the chance… and this was a great chance to see a new colorist play with my line art.

OG) I’ve seen sample pages and Vincent sent me a couple of your finished pages and inked pages, they look great. What do you think of the final product?

For the rest of the Craig Rousseau interview, click here…