Written by Rocco Petrullo and GianCarlo Fernandez, and directed by GianCarlo, 28 Minute Epic is the tale of two best friends from New Jersey. When they lose their cushy jobs at a pornshop, they decide to become superheroes for hire and achieve financial stability after accidentally stopping a crime. After they get help from a “professional” crimefighter, the two find that being a hero isn’t often super. Rocco and GianCarlo are going to Kickstarter to help get this film made and out to those who want to watch it.

The idea all came from all the real life superheroes that already exist in various cities around the world. Then it was imagining a regular guy becoming a superhero and charging for all his life saving actions, but it was the discovery of an actual online superhero registry that lead to the real deep thinking about it all. How would a regular person become super? How would they train? What would they wear? Would people pay for their services? Who’s the sidekick and who’s the hero?

What’s the money for?: The $112,000 that the team is asking for is going towards equipment, effects, costumes, and more.

Rewards: $5 gets you a thanks in the credits while starting at $28 you can get a digital copy of the film, soundtrack, and more. $50 gets you a physical copy and higher rewards include produce credits, dinner with the team, and more.

Sign Me Up!: If you’re feeling super, go on over to the Kickstarter page and start pledging. They still need over $100,000 with the project ending on Febuary 13th, so don’t wait!

If you’re still not convinced, take a look at this interview with GianCarlo and Rocco!

Stash My Comics: Tell us a little about who you are, and the story behind the creation of 28 Minute Epic. 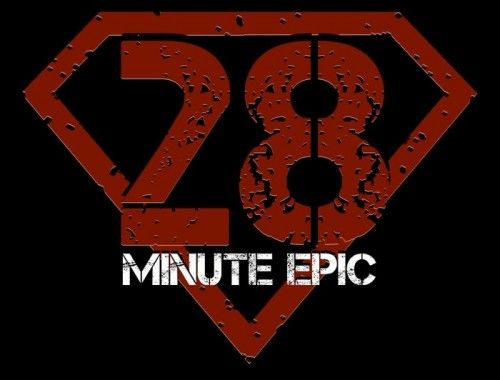 Rocco: 28 Minute Epic is a real life superhero action comedy about two aimless Jersey boy best friends, who are fired from their cushy porn-shop jobs and decide to become superheroes for hire in order to at attain financial stability after accidentally saving someone’s life. With help from a “professional” crime fighter, they find that being a hero isn’t always super.

GianCarlo: The idea originated in college when Rocco wrote a short film called 8 Minute Epic that he directed, and I acted in. This time around the roles are reversed, and writing duties on the script were split. I spent a few years convincing Rocco that the idea was perfect for feature length script, but with all the superhero movies out there, we had to find a way to stand apart from the rest.

Rocco: Both of us grew up on comic-books, superheroes and comic book movies. When we found out that in this country and all over the world, regular everyday people could register as superheroes, and patrol the streets in the name of justice, we started doing our research.

GianCarlo: We found out who some of these people were and what their motivations for crime fighting are. Phoenix Jones, from Seattle, was the first and most influential real life superhero who gave us countless ideas on how to approach the film. We’ve never talked to him, but there’s so much information and videos on the web that it helped us mold characters and the story.

SMC: How did guys meet and how, from that initial meeting, did it lead to thoughts of 28 Minute Epic?

GianCarlo: We met in college, at Montclair State University film school in New Jersey, in 2006. Our love for superheroes kept us coming back to the genre, so we did tons of research and eventually molded a story that we felt was VERY unique, but still familiar so we could create a fan base.

Rocco: We understood that making a film would be an enormous undertaking, so GianCarlo quit his software training job at Apple INC., took out all the money from his 401k, depleted his savings and spent a year developing a story with me. We both stayed a float financially by working on freelance projects like shooting and editing music and marketing videos.

SMC: Tell us some of your influences in filmmaking. 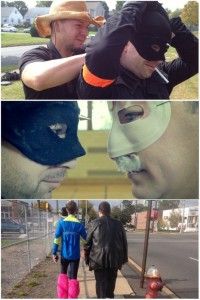 GianCarlo: While attending film school I did my best to watch 1-2 films a day no matter what I had to do. If I knew I was going to have a filled day, I’d wake up at 6 am so I could get a film in. I fell in love with the story telling techniques of masters like Kubrick & Hitchcock, but modern directors like Edgar Wright and Robert Rodriguez really inspire to push my story telling abilities.

Rocco: Kevin Smith was by far my earliest influence to make a comedy. Sure the camera work was subpar and some of the acting was stiff, but the movie was hilarious. He was just this Jersey guy, with no finances, making a project out of passion. I grew to appreciate guys like Judd Apatow and Edgar Wright, but at the end of the day, I’m just a guy from Jersey trying to make a movie I believe in.

SMC: Who inspires you, and what drives you to not only make this film, but other projects in the future?

GianCarlo: I’m constantly inspired by films I watch, books I read or music I listen too. I keep a note pad with ideas for scenes or films that I want to develop. Nothing makes me happier than great story telling. Being inspired by someone else’s film, book or song recharges my creative juices and then I’m on a high until I produce something. I find inspiration everywhere.

Rocco: I have these ideas for films constantly. I see possibilities and I see potential to create something amazing. I get inspired when I see the underdog get his day. When the film with zero budget does better than the million-dollar cash grab, that’s always a burst of motivation to keep on trying.

SMC: What is the goal behind the Kickstarter, and what do you plan to accomplish with its success?

GianCarlo: Kickstarter is a great crowd funding platform where established stars and independent creative people can get unbelievable exposure for their creative projects. We wanted to keep with theme of the film so we decided that we would run our Kickstarter for 28 days. Even though greater donations are accepted, we wanted to make the $28 donation our most popular donation buy offering a download of the film, the soundtrack, the script, the script outline and a “thank you” in the end credits of the film.

Rocco: If we can get the film funded by tons and tons of smaller donations more people will get to see the film and that’s what we want. Exposure.

SMC: It’s easy to see film influences like Kick-Ass, Batman, and Mallrats in 28 Minute Epic, but why films like Braveheart, Gladiator, and The Raid? How did films like that lead you to create 28 Minute Epic?

GianCarlo: This is a character driven film with tons of dialogue but it does have the word “EPIC” in the title and we want to live up to that. Films like Braveheart, Gladiator and The Raid have amazing camera work and EPIC fight scenes, so we looked to these films to understand how we could take our fight scenes on a limited budget and create something worthy that make you sit at the edge of your seat but still crack up with laughter.

SMC: How much did the real life superhero community influence 28 Minute Epic? Were you able to talk and interact with any?

Rocco: The real life superhero community was our most valued resources. There are so many stories online so it was like a having an endless library of information. We have spoken to some and while a few were receptive to the idea of our film some felt like we were making a joke of them, but we assured them that even though the film a is a dark comedy there’s a lot of heart in the story and its characters.

SMC: Who are your favorite superheroes, and did they have an influence on your film?

GianCarlo: Batman, Superman, Wolverine & The Spirit (I even have the first three I mentioned tattooed on my body). But, the only real relatable one for the film was Batman. A guy who dresses up because he want to and feels he can make a difference. It’s hard not to be influenced by him. We all have a little Batman in us.

Rocco: I was always a fan of X-Men and Spiderman, but that never compared to Batman. The 1989 Film was the first one I ever saw and ever since then it’s been an influence to me. The Dark Rider, one of the more questionable heroes in the film, is basically what would happen if we had a Batman. At first he would seem really cool, but then you start to see that this guy is kind of scary and not all there.

SMC: Is 28 Minute Epic all there is to tell in this story, or could we be in store for more?

GianCarlo: We know we that should only focus on one film at a time so we’ve done a great job staying focused on the one film, BUT we do have an idea for and EPiC sequel if the we ever get the opportunity to make it happen.
Thank you so much for your time, and for giving us the chance to talk with you about 28 Minute Epic!

SMC: Any advice you’d like to part with for aspiring filmmakers?

Rocco: No matter how crazy your idea for a film is, if you are patient, and work hard on it, anything is possible. Watch lots of movies, read tons of scripts and learn from those who are more knowledgeable than you.

GianCarlo: You can’t do everything alone, so find passionate loyal collaborators that are willing to learn from you and teach you their skills. You can do good work alone, but you can have an indelible impact if you have an army behind you. GET AN ARMY.

Fan Film Friday – Batman: Dead End / World’s… Welcome back to another edition of Fan Film Friday.  This week I'd like to showcase two of the best DC…

Fan Film Friday – Batman: The Line Welcome back to Fan Film Fridays ladies and gentlemen!  It's been a great ride so far and we've got a…

Fan Film Friday: Grayson Welcome back to Fan Film Friday.  This week, we're going into the future.  It's a world where the Dark Knight…