If you’ve been around the site for long, you know I’ve dedicated a good amount of keyboard strokes to the support of many a crowd funding project. Today is different. Today, I write for myself. Today, I just might puke from the overwhelming anxiety.

Since I’ve discovered the world of crowd funding, I’ve done nothing but reap the benefits. Whether I’ve been able to financially back or promote and share a project, it just feels good knowing you’ve helped somebody’s idea come to life, and hey, you get cool things for doing it! As of today, my position has flipped. Now I’m the guy loosing hair, chewing fingernails and trying to keep my right eye from twitching long enough to see what I’m typing, all on account of running a Kickstarter campaign. 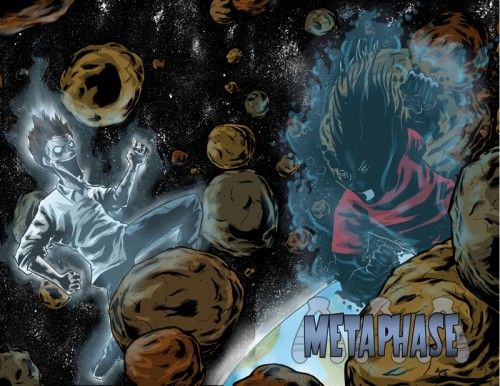 Now, it might seem like I’m complaining. I assure you I’m not. The fact is, like the many crowd funders that have come before me, it’s personal. You’re putting yourself out there with no assurance you’ll succeed, and it makes you feel insecure. And for me, the story I want to create is VERY personal.

Over three years ago my wife and I had our son Ollie, born with two congenital heart defects and Down syndrome. The first year was full of too many close calls and little promise that things would be okay. Despite the mountain of impossible physical obstacles my son faced, he kept proving what was possible. After his last major heart surgery, I began to look for comic book heroes he could relate to, but nothing really fit the bill. That’s when I got the idea for Metaphase, an all-ages graphic novel about the world’s first superhero with Down syndrome!

Metaphase is a story written by myself with art by Kelly Williams to be published by Alterna Comics. The book has it’s roots in my son’s real life story, but with a superhero twist. Lash, Ollie’s dad in the story, is a superhero on par with the likes of Superman. His life changes when he has a son with all the physical vulnerabilities that come along with having heart defects and Down syndrome. As Ollie gets older he becomes tired of his dad’s overprotection and unwillingness to include him in his superhero adventures. Ollie has lived his life listening to the world tell him he will be limited in what he can do, with the added frustration of comparing to a dad with unlimited ability. Fueld by his desire to be “super” Ollie turns to Meta-Makers, a company that claims it can give anyone powers through chromosome tampering. However, this decision may lead directly to the downfall of the greatest hero of all time… Ollie’s dad!

What’s the Money for? The book has been written, so all that’s needed is the funding to put it together. All the funds will be used to pay for the art and lettering to be finished, black and white print run (with an eventual stretch goal for color), shipping and fulfilling of rewards, and the Kickstarter and Amazon fees.

Rewards: There are many tiers to choose from with $15 being the starting pledge to get yourself a physical copy of the book. Like digital? That will only cost you $10. Higher pledges include “high five” signed editions (with a handprint of the real life ‘Super Ollie’), a Kickstarter only incentive cover by TMNT legend Jim Lawson, a limited pinup tier and original artwork!

Sign Me Up! I would be eternally grateful if you visited the Metaphase Kickstarter and made a pledge. Seriously, even the smallest amount helps! Don’t have the cash? That’s okay! Cyber high five to all who share with their friends/family/enemies! Please Tweet, Facebook, etc. to spread the word! THANK YOU!