This week’s Crowd Funding Flash is a double feature, because I don’t want to see either of them miss their mark. Unlike the whole potato salad silliness that’s plagued Kickstarter, both of these projects feature 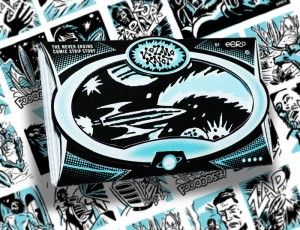 something creative and new. If you don’t back these, you’ll have let potato salad win. As supports of comic books we can’t stand for that can we?

First up is Erik T. Johnson‘s Kozmo-Knot. The project was launched with only a 20 day window, which is 10 days shorter than the average comic book Kickstarter. What’s unique about this comic is that the format is completely innovative. The collector in you may be saying “what the heck do I do with this?”. Well, this puppy isn’t made to be bagged and boarded. It’s a conversation starter. WOW your friends, co-workers and your aunt Petunia by pulling this crazy contraption out of your wallet and showing it off. Show them that comics are fun and interactive. GO NUTS.

Oh hey, and if collecting IS your thing, check out Erik’s other out-of-the-box comic project The Outliers. Small print run, killer story and unique book design has made copies sell as high as $50 (cover price was $5). Outliers also happened to be my favorite book of 2013. Think about that while you mull over backing Kozmo-Knot…

Next is the fun, quirky and original Unit 44 by Wes Locher and Eduardo Jimenez. The first issue of the series had previous success via Kickstarter, and now the team is back to fund the rest of the story, with help from publisher, Alterna Comics. The gist of the story is this: Area 51 employees forget to pay the rent on a storage unit, and the secret contents are sold at public auction. I’ve read issue #1 and it’s an absolute riot. Resist buying an overpriced variant cover this Wednesday (heck, it’ll just depreciate anyways) from your LCS and spend the money on something different and fun, with the added satisfaction that it happened because of YOU. Video below…