Mega-successful crowd funding oriented publisher, Inverse Press, has returned to Kickstarter to seek funding for the subsequent issue #3 in the carrion-eating horror comic, Roadkill du Jour, written by Kevin LaPorte and drawn by Shawn Harbin. If you’re new to the story, you’ll want to see what our reviewer thought of issue #1 and issue #2, as well as get a nice summary of what you missed.  If you’d like to dig in to the source material, the current Kickstarter has tier levels available that will allow you to read previous issues and more – $15 for PDF and $30 for floppies includes issues #1-3 as well as issue #4 once it’s complete!

From the press release:

Voodoo, biker gangs and carrion-eating collide into one exploded street pizza in the motorcycle-driven horror story, Roadkill du Jour 3, available NOW at Kickstarter.com! In this third of four issues, 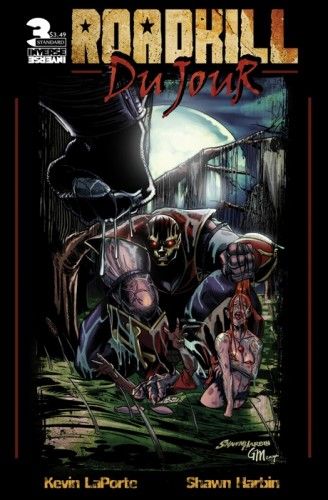 Southern biker duJour, cursed to eat only roadkill for the rest of his days, hits the road with his reconstructed motorcycle club to assail the lair of the very witch who hexed him – Mama Houdoo.  But, Mama sees them coming and dispatches her own biker army to intercept and eliminate her rivals.

Check out the video trailer and other information on the comic and the crowdfunding campaign at: https://www.kickstarter.com/projects/laporte/roadkill-du-jour-voodoo-biker-rumble-in-the-bayou

Roadkill du Jour 3 is being published independently by writer Kevin LaPorte (Inverse Press’ Clown Town and Last Ride for Horsemen) via his Inverse Press imprint and is co-created by artist Shawn Harbin (BSX22 Studios’ The Dungeon Comic).  Issues 1 and 2 are available digitally and in print from inversepress.com OR via specified reward tiers from the Kickstarter campaign.

The Roadkill du Jour 3 Kickstarter campaign offers an array of cool specialty rewards, unique editions of the book, and incredible opportunities, including:

Kickstarter allows creators to take funding – AND the projects thus created – directly to the fans!  It’s as simple as signing up, choosing the reward(s) most appealing to you, and setting up secure payment through Amazon.com (EASY – especially if you already have an Amazon account).

Inverse Press publishes comic stories of the weird and horrific from the minds of writer Kevin LaPorte and artist Amanda Rachels and their collaborators.  Active since 2010, Inverse has produced a variety of comics of different forms, including The Blind Eye, Clown Town, Flesh of White, Roadkill du Jour and Last Ride for Horsemen.