There’s a new project in town, and it features a troubled biker who rides the lonely road of the bayous while only sustaining himself with roadkill! Yum! The horror comic Roadkill du Jour is sure to test the limits of any stomach that dares to consume food while reading. Despite whether you lose your lunch or not, this comic is sure to entertain you! The four issue series is written by Kevin LaPorte with art by Shawn Harbin, and colors by Laura Guzzo. From the press release:

In the bayou, a clash of rival motorcycle gangs vying for territory leaves one club decimated, with just one survivor – the cursed biker, duJour.  Afflicted by the dark hex of the rival gang’s ever-pregnant voodoo priestess, Mama Houdoo, duJour rides backwater roads alone, living on nothing but what dies on the road and chasing the fleeting soul of his love, Vanessa.  Only when saved from a deadly fate by a most unlikely Samaritan does duJour reclaim the gumption to rebuild the Roadkill Motorcycle Club and ride to vengeance and the lifting of the curse.  He and his motley assemblage of hog-straddling burnouts must survive a muddy gauntlet of monstrosities and magicks to reach Mama Houdoo, take down her gang and nullify the source of her power – the horrible, unbirthed thing inside her! 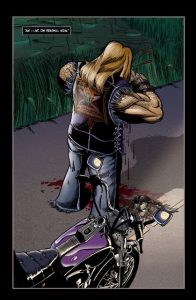 Kickstarter allows creators to take funding – AND the projects thus created – directly to the fans!  It’s as simple as signing up, choosing the reward(s) most appealing to you, and setting up secure payment through Amazon.com (EASY – especially if you already have an Amazon account).

For the Roadkill du Jour Kickstarter campaign, Kevin, Shawn and Laura are pleased to offer a smorgasbord of cool specialty items, unique editions of the book, and incredible opportunities, including:

If you’re interested in keeping up with Kevin and Inverse Press, be sure to follow him on Twitter (@InversePress).  Check out the project video from the Kickstarter below!

I write Crowd Funding Flash just about every Wednesday right here at StashMyComics.com! Keep up with the latest spotlighted projects by following me on Twitter @ChipReece. Please also check out the graphic novel I’m writing, METAPHASE – Inspired by my son and other little heroes with Down syndrome. A 10 page preview will be available soon from Alterna Comics with art by Kelly Williams!

News Flash! Clown Town to Release via comiXology Submit Up and coming comic's publisher, Inverse Press, is hot on a streak of recent success. The publisher has had two successful Kickstarter campaigns…