Hey ya’ll, this week I’ve put on my snake skin boots to take you into the Wild West for the latest Kickstarter to visit the StashMyComics saloon, The Further Travels of Wyatt Earp! This five issue series follows the legendary lawman’s adventures AFTER the famous “Gunfight at the OK Corral” and written by Joe “Six-Shooter” Caramagna with art by Scott “Gold Rush” Koblish.

Did you know that Earp spent the last 50 years of his life NOT in law enforcement? Neither did I! Apparently he also dabbled in horse racing, card dealing, and refereeing boxing! Caramagna expounds on the storied career of the western lawman by exploring what his life might have been like in his later years. Not familiar with the artistic stylings of Scott Koblish? Well, he’s done work on Marvel Adventures, Wolverine: First Class, Worlds’ Finest…ah heck just look to the right. Pretty ain’t it? 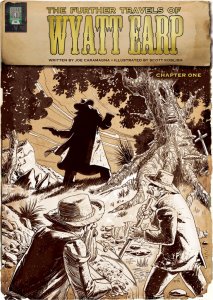 What’s the Money for? The goal for this project is to cover the costs of the first two installments of this series. This includes digital distribution, marketing, and fulfilling the pledge awards available with this project.

The Rewards: For a sample of what Joe has cooking, you can give five dollars and get a PDF of the first chapter and a thank you in the back of the book! $10 will get you chapter two as well. The sweet spot is at $28, where you can get a special Kickstarter-backer only, signed and numbered trade paperback of the first two chapters that includes loads of extras! Higher tiers include personalized copies of chapter one’s script, prints, professional lettering demonstration or the employment of Joe Caramagna himself on your creator-owned comic book! Big spenders can even get their mugs drawn in the series as an outlaw!

Sign Me Up! If any of the above rewards catch your eye, then you’ll want to pay the Further Travels of Wyatt Earp Kickstarter page a visit before the project ends on November 23rd! Choose the pledge you want to make and start telling your friends so the project makes it’s goal! To keep up with project news follow Joe Caramagna on Twitter (@JoeCaramagna).

Crowd Funding Flash comes out every Wednesday right here at StashMyComics.com! Get the latest on spotlighted projects by following me on Twitter @ChipReece! See you next week!