Dr. Benjamin Franklin famously warned of two inevitabilities in life: death and taxes. If he had waited around a couple hundred years he would have added a third to his list: the superhero adaptation.

It seems every producer and their mother can’t wait to get superheroes off the page and into other mediums, and since there is a huge discrepancy in the amount of money superheroes earn when featured in the monthly books that bear their name, and the amount of money these same characters generate when featured in major motion pictures and in animated television series, you understand. Look, Disney didn’t buy Marvel because they wanted to make sure Thor: The Mighty Avenger kept appearing every four weeks on LCS shelves. They bought Marvel because the film version of The Avengers will be a license to print money.

So fanboys and girls put up with the film versions of Ghost Rider and Punisher: War Zone and Daredevil, and occasionally a visionary tosses us The Dark Knight or X-Men:First Class. But hey, the Hollywood superhero movie machine, love it or hate it (and either way we do seem nigh obsessed with it), ensures that our comics keep coming out from week to week. So we abide.

Then Broadway sticks its nose into it and we all lose our bananas. 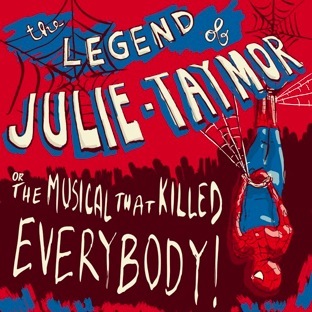 I’m a comics fan by hobby but a theatre person by trade, and living in New York City as part of that world while Spider-Man: Turn Off The Dark made its long and storied journey to the Great White Way has been fascinating. For those who may be unaware, this is Spider-Man as interpreted by visionary theatre director Julie Taymor and composers Bono and the Edge of U2 fame. There have been injured actors, seven-months of previews, technical gaffes that grind the show to a halt on any odd night, and even the ominous sudden death of the musical’s original producer moments before the signing of the initial contracts to get the project underway. This is a journey that has been derided all over the blogosphere on the multitude of comics and geek-centric websites. But this time ‘round the comic fandom’s barrage of snark has nothing on how the theatre community has reacted to Spidey’s swing onto the marquee of the Foxwoods Theatre. So finally, do comic book fans have an ally in the seemingly never-ending war against unholy adaptations?

“Comic book fans should love us!” laughs Joe Barros. He’s the director of The Legend of Julie Taymor, or the Musical That Killed Everybody! a new musical just wrapping up a hugely successful run at this year’s New York International Fringe Festival, the largest indy theatre festival in North America. Legend is one of at least three indy plays in NYC over just the past year that has targeted Turn Off the Dark for derision, and certainly the most successful, playing to sold-out Fringe Fest crowds and strong reviews.

There is certainly “a little bit of bashing” going on in Legend, admits Barros. “We are throwing tomatoes at Spider-Man: Turn Off the Dark and allowing the audience to come with us.” But he elaborates: “[This show] goes deeper than Spider-Man. It’s a parody of a failed collaboration.”

Composer Dave Ogrin agrees. “[Legend is] about pursuit of a vision. About a woman who has a dream and wants to pursue her vision of art and is impeded by finances and practicality and Broadway and union rules and press and the public and her own unrealistic expectations.”

Their play takes the well-publicized foibles of the behind-the-scenes reality of Turn Off the Dark and builds on them for dramatic and comedic effect; “an exaggeration of reality” is how Ogrin describes it. Julie Taymor is Julie Paymore, a visionary artiste who demands confetti cannons and onstage tornados, who kills a man who stands in the way of her vision, and who (perhaps) burns down the theatre on the opening night of her magnum-opus play-within-the-play, Spider-Dude. “We didn’t even try to make the ending realistic,” Ogrin admits with a grin. “But the majority of it is based on reality.”

But in the end their musical is not a musical about Spider-Man, both men agree. It’s a show about a disastrous adaptation. Couldn’t a similar story be told about Catwoman? Or X3? Or Batman and Robin? We’re only human, after all. There’s something perverse in all of us that makes it just about impossible to turn our heads away from a train wreck.

And this is not necessarily a condemnation of the artist who tries. When pressed on the matter, Barros near-gushes his respect for Julie Taymor as he speaks of The Lion King and her Beatles-centric film Across the Universe, and well-deserved gushing it is. “It’s theatre, and it’s all in good fun,” he says of Legend. “I bet Julie Taymor would think [our show] is wonderful and I would love to meet her and I hope she comes.” Ogrin agrees: “Maybe we’re unfairly blaming Julie Taymor.”

But Turn Off the Dark, for better or for worse and even though she’s been removed from the directing helm, is Julie Taymor’s baby, and it is ultimately her vision of Spider-Man that has made it on-stage, all sixty-five million dollars of it. So what does that mean, exactly? At the end of the day is the world any worse off that this particular version of Spidey has been added to the character’s mythos? Are comics worse off for it? Is theatre?

“I think theatre is a better place,” Barros says of the impact of Turn Off the Dark. “Someone’s going to come along and use what’s been learned from this project.” He imagines a day when all the technical goings-on at the Foxwoods Theater are put into the hands of someone who will wield those tools to better tell their story than Taymor and company managed to do this time around. And though Ogrin acknowledges the various dark clouds that drift around Turn Off the Dark, he does say something that any comic book fan forced to grin and bear it when asked to sit through The Rise of the Silver Surfer will be able to relate to: “The fact that Spider-Man exists allows Broadway to continue, because the way [it] is right now you NEED mega-hits for Broadway to exist.”

The Legend of Julie Taymor, or The Musical That Killed Everybody! (Book and Lyrics by Travis Ferguson, Music and Lyrics by Dave Ogrin) just finished a five-performance run as part of the New York International Fringe Festival. For updates and information about future productions visit: http://www.legendofjulie.com/

Back Issue Bin to the Future: The Maxx #1 When I think of Sam Keith, I don't think of anything even remotely mainstream. I know he did Marvel Comics…