When people think of Wichita, KS (a rare thing I’m sure), it’s not likely to include anything about comic books. The online comic book store Evil Squid Comics hopes to change this sad fact by putting ICT on the map with the first ever Air Capital Comic Con (ACCC) on November 17th, 2013!

Comic book fans in Wichita have been able to support two to three comic stores at once through the years, most notable of these being the more than 30 year old shop Prairie Dog Comics. A surprising fact given that the 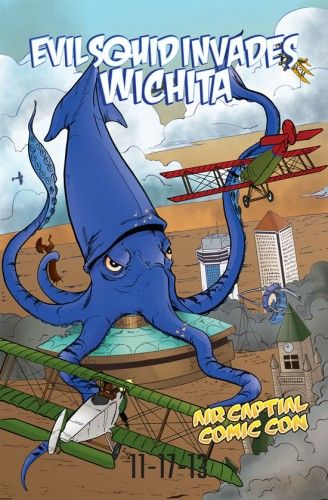 community has done very little to tap into the local fanbase with a successful comic con. Sure, there’s the recently launched Encounters Con, which just finished it’s second show this month. Sadly missing from Encounters is enthusiasm for comics, evidenced by the lack of information on comic book creator guests on it’s website. Were they there? Sure. Did they want people to know? Apparently not. Blatant comic fan neglect. ACCC aims to fix this.

While ACCC is starting small, I already have good vibes about the show for a number of reasons. Here are a few that excite me the most:

I mentioned the “local” bit because, the guys behind the show went out of their way to reach out to the local comic creating community. This tells me they’re here to do more than throw a party. They’re helping to build the community around the show, and I want to be a part of that. Speaking of, check out the sweet print on the right by Wichita native Eric Weathers!  Also, admittedly, I was completely sold after the Con organizers told me who they would be doing the raffle for.  My son has Down syndrome, so yeah, I’m majorly stoked!

Why am I talking about this small-time con? Well, I REALLY want it to succeed. Our community of creators is small, and I’d love to see it grow because COMICS. So, if you’re in the area, driving through or feel like taking a short roadtrip for the heck of it, stop by and show your support. Don’t forget, the Air Capital Comic Con is on November 17th ONLY!

Chip Reece is a long time contributor and editor for StashMyComics.com. He will be attending ACCC as a creator offering copies of his preview book for Metaphase, a story inspired by his son and other little heroes with Down syndrome. Follow him on Twitter @ChipReece.

The 10 page preview of Metaphase with art by Kelly Williams is available for FREE on ComiXology from Alterna Comics! Please read, rate and share!