There are plenty of things for a fangirl to rant about this week:

A fangirl could rant and rave about a category on the Barnes & Noble website “Women’s Comics.” Does it strictly target female authors or artists in comics? No, Tank Girl is in there, which is written and drawn by men. So what are the qualification for a comics to be a “Women’s Comic” in the eyes of Barnes & Noble? You can take a look at the category and judge for yourself…

What has been making waves across social media platforms is a reader who did not bother researching before claiming that an inside connection got Kelly Sue DeConnick her writing gig.

If you’re not aware, Deconnick is currently behind Captain Marvel,  Avengers Assemble and Ghost.  The claim was that 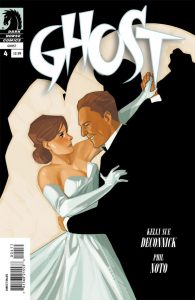 DeConnick only received her writing jobs because she’s married to Matt Fraction. As awful and horrific as that is, DeConnick’s laid out a well written retort on her Tumblr account, which you can read by clicking here.

The only problem with this are the people who are not reading her blog posts and still not bothering to research this issue as well as other assumptions before hitting the send button or posting a letter.

An even bigger issue lies in the thought process behind the idea that was laid out from the beginning. Even if DeConnick had never worked with Warren Ellis or Steve Niles before she ever met her husband, at what point is it acceptable for someone to insinuate that someone’s pitch was accepted simply because of whom they are married to? It’s not.

Does this mean that Laura Allred is nothing without Mike Allred? That her Eisner Award is meaningless because of whom she is married too? Of course not!

While marriages are partnerships and working with your spouse, or working for the same company as your spouse, can be pleasant, at no point should the audience define a creator by their spouse. If they share by-lines on books, this distinction can be more difficult to make. However, they are still doing their own work on books. Fans should be doing their research before going on rants. Yes, it often requires more work than just looking on a Wikipedia site to get all the facts. While the Internet offers anonymity, it does not offer a free pass to those who want to go off without facts. The writers, artists, letters, editors, etc. are all living breathing people.

True criticism, based on actual work is usually accepted and appreciated by artists. Baseless taunts, accusations and assumptions are just hurtful. The comics community is small and the answers are out there for those willing to use search engines. It’s not only useful for comic book readers, but retailers looking to create a customized section for female comic readers (hint- female readers do not all fit in a box.)

You know what they say assuming does… if you don’t Google it.

Read Jessica’s ongoing column, The Fangirl Concern, semi-weekly right here at StashMyComics.com! You can find previous entries in this series by following this link.