With cold waves coming and going, you might be looking for a spooky comic to curl up with by the fire.

This week, The Fangirl Concern highlights another female comic author: Rachel Deering. I got a chance to talk to Deering about her comic Anathema, which was the result of two successful Kickstarters bringing in $32,000. Deering was also the administrator, writer, editor, and the main letterer for the acclaimed book Womanthology and is currently lettering Monkeybrain Comics’ Amelia Cole and the Unknown World.

While technically indulging in the traditional “damsel in distress” trope that many comics trudge out, Deering has a female lead in Anathema on a quest to rescue her love’s soul, not just being kidnapped by a sinister being. With art by Chris Mooneyham (Five Ghosts Haunting Fabian Gray) these stunning horror books are dark and engrossing. 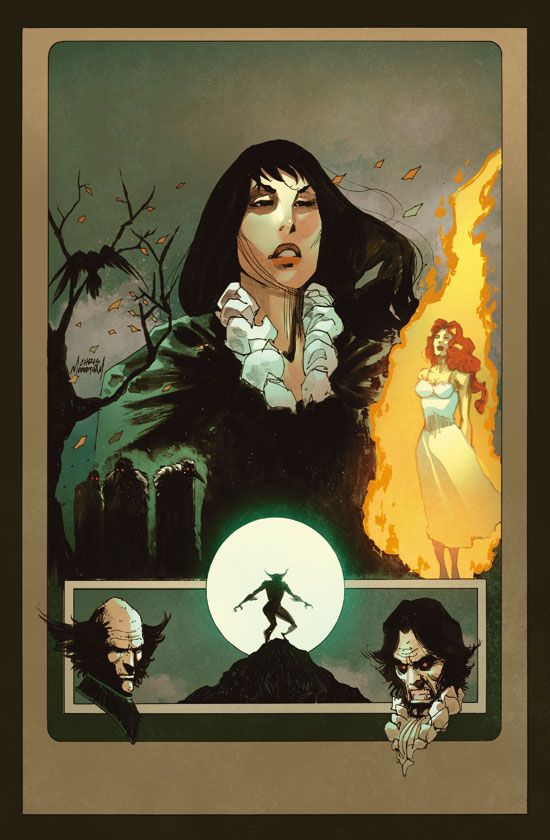 Think of a classic and classy period piece monster movie with a modern point of view.

Deering’s indulgence in the horror genre and playing with werewolves is a natural background for her, “I got into reading comics as a kid because of one of my uncles. He gave me a small stack of horror and adventure comics, and I was pretty much hooked from the start. I began creating comics immediately after, when I realized that there were no places in my backwoods town to buy new books. If I wanted stories, I was going to have to create them myself.”

With this natural interest in horror and Halloween as her favorite holiday, Deering had the pieces for her comic waiting to be put together. “I came up with the entire concept while having a shower one evening. I plucked the characters and settings from the little tree of horror growing in my brain and made up a little Anathema pie.”

Deering says the book is sold out in print format, however she will have a collected edition of the first three issues available for C2E2 this year. You can also purchase all the current issues on ComiXology.

Deering also said that Anathema is a book where you can take your time to enjoy because you will not always have to play catch up, “Anathema will be a 6 issue limited series, and nothing more. I am a big fan of stories that have a definite beginning, middle, and end. I want readers to get that satisfying chunk of story, and then move onto other worlds.”