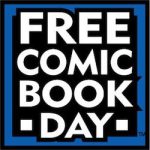 Free Comic Book Day is just two days away and Jamal Igle dropped by StashMyComics to talk about his creator owned book, Molly Danger! The title character will be appearing in the FCBD comic from Action Lab Entertainment in a flipbook with their flagship title Princeless.

This will be Molly’s first appearance since Igle finished a successful Kickstarter campaign in August 2012. Crowd funding was used to help kickoff what will eventually be a four book, hardcover graphic album series about a super strong and immortal 10 year old who has protected the city of Coopersville for 20 years. Igle talks about his inspiration for the book, the most bizarre character he’s drawn, and more! Read on to get an exclusive behind the scenes look from the series creator himself!

SMC: I know you’ve been back working on IDW’s G.I. Joe with full interiors to show up in G.I. Joe #6, as well as Action Lab’s Free Comic Book Day issue for Molly Danger.  What else do you have on the horizon? 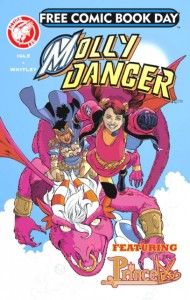 JI: Just a few covers and some stuff that hasn’t been announced yet.  Molly is my primary focus.

SMC: How does your current contracted work affect your deadlines with Molly Danger?  Do you feel things are on track at this point? What have you done to keep it all together?

JI: Like I said, Molly has been my priority so whatever outside work I’ve taken has had to be limited and made to fit into the schedule.

SMC: When you launched your campaign you mentioned you were using this to affect positive change on an industry you feel is growing darker in tone. How specifically do you feel Molly Danger will do this?

JI: Just from content alone, the visual is the thing we focus on first. There’s no blood, or guts in Molly Danger. I’m purposely avoiding being overtly visceral. From a story standpoint, Molly is a throwback to the comics I read in the 80’s from DC and Marvel. It’s mostly about content really, it’s an approach that I feel a lot of comic publishers have abandoned in light of the end of the Comics Code Authority. It may be self censorship on my part, it certainly makes it a more challenging way to write and draw an action story.

SMC: Are there current comics you see making this impact now? What are some favorites and why?

JI: In terms of superhero comics, Mark Waid’s Daredevil is a great example of it I think. Also The Flash and Vibe at DC Comics as well. 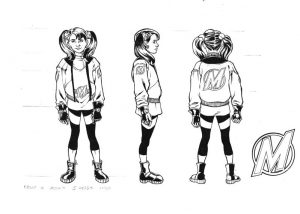 SMC: You’re a 22+ year veteran of the industry. How has your previous work influenced this book?

JI: How could it not? Everything I know and have learned not just as an artist but working with pretty much every big name writer at DC at one point or another has informed this project. I’ve had the pleasure of working with everyone from Grant Morrison, Greg Rucka, Mark Waid and Geoff Johns on 52, to spending two great years on Supergirl with Sterling Gates. I’ve worked with James Robinson, Stuart Moore, Chris Ryall, Chuck Dixon, Paul Dini, Alex Simmons, the list is huge. I’ve taken everything I’ve ever learned from reading their scripts and applying it to my work.

SMC: Can you pinpoint specific inspirations that contributed to the creation of Molly Danger?

JI: That’s a bit more difficult because Molly has morphed and changed over the years of development. Early on it was stuff like Kim Possible and Juniper Lee. Working on Supergirl for so long also has had a significant effect as well. I’m also sure there’s a lot of things like the Powerpuff Girls, magical girl anime like Cardcaptor Sakura and Maka from Souleater.

SMC: Action Lab Entertainment is arguably most known for Jeremy Whitley’s Princeless, which is challenging the way girls/women are portrayed in comics. Does Molly broach this subject? If so, in what specific ways? 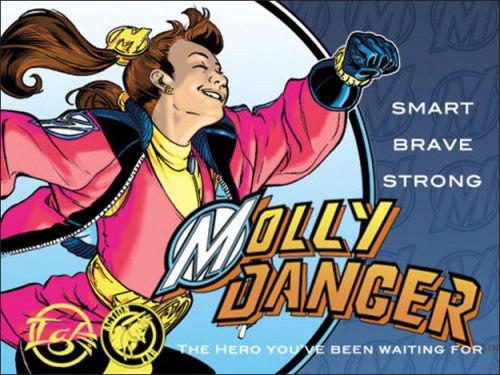 JI: I think so. Molly is very straight forward, she’s a superhero first and clearly the protagonist in the story. I wanted Molly to clearly be the one pushing the story forward. Molly is dangerous in quite a few ways, because she can be very charming and disarming. The worst thing in the world is a 10 year old with two decades of practice at being 10.

SMC: It was announced that Molly Danger will be made into an audiocomic. What makes the series a great fit for this treatment? What about it will transfer well from the printed page to audio?

JI: I think it’s just a fun, bouncy story, that translates well. There are giant robots, explosions and super villains in the first book alone. There’s a lot that can be done in the audiocomics version.

SMC: I’d read that you had initial plans to make Molly Danger into a cartoon. Is this still a possibility?

JI: I’m open to the idea, but nothing is currently in the works.

SMC: What has been most enjoyable about being a professional comic artist?

JI: The problem solving involved is the best thing to me. Drawing comics can be a bit of an endurance test, you’re also working against tight deadlines and trying to do the best possible work you can. I find it all exciting.

SMC: What’s the most off the wall thing you’ve been asked to draw?

JI: Have you ever heard of a character called “Razorback” from Marvel?

SMC: Are you attending any upcoming cons/signings? Where can you be found next?

JI: I’ll be signing copies of Molly for Free Comic Book Day at Challenger’s Comics and Conversation in Chicago. Then I’ll be at Heroes Your Mom Threw Out in Elmira, N.Y. on May 18th. My Con schedule includes Denver Comic Con, Heroescon in Charlotte, SDCC, New York Comic Con and Rhode Island Comic Con.

You can usually find me writing Crowd Funding Flash just about every Wednesday right here at StashMyComics.com! Keep up with the latest spotlighted projects by following me on Twitter @ChipReece.

Check out the graphic novel I’m writing, METAPHASE – Inspired by my son and other little heroes with Down syndrome. A 10 page preview will be available May 4, 2013 (FCBD) on ComiXology from Alterna Comics with art by Kelly Williams!