Secret Adventures of Houdini returns with a FREE preview of volume 2, just in time for Free Comic Book Day 2014!

From the Press Release: 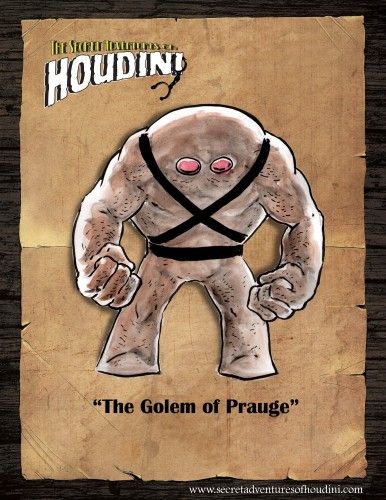 The famed illusionist returns with a free introduction to his upcoming adventure entitled, “The Golem of Prague.”

Share in the highly anticipated return of Harry Houdini this Free Comic Book Day, 2014. The story of illusionist and escape artist Harry Houdini returns to life as illustrator Sean Von Gorman and writer Todd Hunt introduce the newest, bite sized, installment of The Secret Adventures of Houdini graphic novel series. Discover another untold story from the final years of Harry Houdini’s life as his connection to the “Golem of Prague” is revealed.

In this free offering for Free Comic Book Day 2014, witness how the “Golem of Prague” connects the final moments of Harry Houdini’s last adventure to his thrilling return. Travel back to a world of magic and mystery as another piece of Houdini’s secret past leads up to his newest adventure and continue the story when The Secret Adventures of Houdini – Book Two is released in the fall of 2014 through ALTERNA Comics.

This special free issue can be downloaded at https://www.comixology.com/The-Secret-Adventures-of-Houdini-The-Golem-of-Prague/digital-comic/96874 today, May 3rd, 2014, for FREE COMIC BOOK DAY 2014!

A free 16-page download of The Secret Adventures of Houdini – Book One is available at: https://www.comixology.com/Secret-Adventures-of-Houdini-Vol-1-Preview/digital-comic/35083

Find out more about the exciting world of “The Secret Adventures of Houdini” at: http://secretadventuresofhoudini.com.