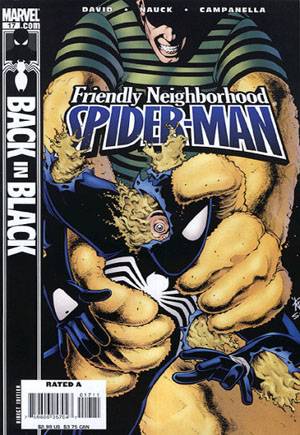 At Riker’s, Sandman has broken in trying to break out a man named Floyd Baker. Across town, Spider-Man is web-slinging away from a police copter for being out on patrol. Th guards at Riker beat back Sandman and he escapes through a floor drain. At his school, Peter has spent the night in his Ben Reily disguise, but Flash figures out who he really is and gives him keys to his apartment to stay at, but then makes a phone call after he leaves, telling the person on the other line they can get paid big for it.

At the apartment, Peter laments how his life has turned out, when suddenly Sandman somehow finds him and asks for his help in clearing the name of Floyd Baker, who happens to be his father, who left him when he was a kid. Seeing the picture of his Uncle Peter was holding, Sandman realizes that it is the man his father was accused of killing!

So, back comes the alternate-earth Uncle Ben from the lame time travel arc earlier in the series. I have no idea what the point of this title is to be honest. None of the arcs have any effect on any of the other Spider-Man titles. It’s almost as if this is Spider-Man Unlimited, but monthly with a continuing story. Very boring, very confusing and very unnecessary… not sure why I still read it even.