CAPTAIN AMERICA 2 – BUCKY LIVES!  CAPTAIN AMERICA 2 – WHO KILLED NICK FURY?  Ok, so I have a tendency to think of a B-Movie title for just about anything I see.  That being said, The Winter Soldier is far from a B-flick.  Marvel Studios’ most recent blockbuster (which took in $95 million opening weekend – an April record) is definitely a worthy addition to the growing Marvel cinematic universe.

Steve Rogers is adjusting to his new life in the 21st century.  He keeps a list of things he’s told he missed out on (I noticed the Berlin Wall, I Love Lucy, and Marvin Gaye on there, just to name a few), noting 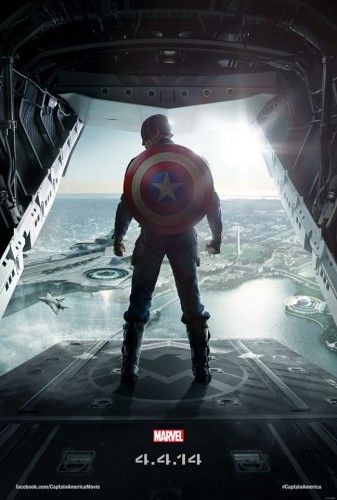 that the Internet has been very helpful in catching up.  However, his black and white World War II era values are beginning to conflict with the ever-growing gray area of modern world affairs.  He is getting a bit frustrated with his new-found role as S.H.I.E.L.D.’s “janitor”, cleaning up messes for Nick Fury.  Cap is forced to dive (without a parachute) into the politics behind the scenes of S.H.I.E.L.D. when Fury is attacked and killed in front of him.  Nick’s last words leave an ominous tone for the movie – “Trust no one.”  Captain America is somewhat forced to confide in Natasha (AKA Black Widow) after she finds the secret flash drive of S.H.I.E.L.D. documents that Fury gave to him.  Their quest for answers puts them in the crosshairs of a legendary assassin – The Winter Soldier.  Rogers is shaken when he discovers that this gunman is none other than his old pal Bucky Barnes.  Cap and Black Widow are equally shocked to find out that the sinister HYDRA has infiltrated numerous government organizations, including S.H.I.E.L.D.

The movie has plenty of juicy tidbits for fans of the comics.  We meet Agent Carter (who reportedly has her own series on Netflix in the works), as well as The Falcon, whose wings are actually somewhat believable.  Robert Redford makes for a fantastic villain, and keeps audiences guessing where his alliances are.  The story kept me interested throughout – the one place where Cap’s The First Avenger failed.  (In the spectrum of crimes against cinemaniacs, nothing is quite as unforgivable as letting the audience get bored.  I’m talking to you, Red Skull.)  The movie’s subplot (a “defense” initiative with the capability of stopping terrorist threats before they materialize) is actually quite thought-provoking.  Equal parts Minority Report, V For Vendetta, and 1984, the sense that Big Brother is watching is very real.  How much control should the government, and the individuals within it, possess?  Can criminals be punished for a crime that hasn’t yet happened?  Even if it has the potential to save lives?  The shortcomings of the initiative become more obvious when power falls into the wrong hands, taking out threats to HYDRA’s world domination.

Stan Lee’s cameo is priceless, as always.  The post-credits scenes (yes, plural – like they did with The Avengers) do not disappoint.  The Winter Soldier may be on his way to re-discovering his inner Bucky!  Additionally, Marvel teased us with Scarlet Witch and Quicksilver, who will appear in next year’s Age of Ultron epic.  The camera also lingered on a certain scepter (which reminds us that the only people who stay dead in comics are Uncle Ben and Bruce Wayne’s parents).