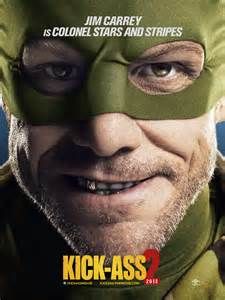 I was a big-ass fan of Kick-Ass, the film adaptation of the Millar/JRJ comic book of the same name. I want to make that clear. I was, and I remain that to this day. I’ve included Kick-Ass on several of my past lists on the site, and I think I’ve made well known how much I enjoy the film. I’ve seen it a number of times, which is kind of a rarity for me these days. So I was excited about Kick-Ass 2, which now exists in this world as a film I’ve yet to see.

I was a big-ass fan of Jim Carrey back in the day. In high school, to be specific, when I was a young actor in school plays and competing in speech and debate scenes and things like that. For several years, I played just about every part I received as a flat-out Carrey clone, all rubber faced and loose-limbed, turning his “Cuban Pete” cover from The Mask into my own personal theme song.

Jim Carrey is in Kick-Ass 2. You maybe didn’t recognize him, at first, in the trailer, playing Colonel Stars & Stripes, as he’s vanished himself into the role as few actors can do like Jim Carrey. So a sequel to a picture I love, starring the guy who was bar-none my favorite actor for years and years and years… you’d think I’d be right on board. 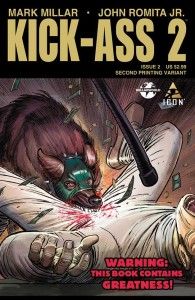 Then it came out that Jim Carrey, after having seen the completed cut of Kick-Ass 2, had decided not to do press for the film, citing its extreme violence. My initial reaction was probably a lot like yours: did he SEE the first movie? Did he READ the screenplay, or the Kick-Ass 2 comic book the movie was based on?

Details, though. Like everything, the devil is in the details. Carrey finished shooting on Kick-Ass 2 before December 2012; meaning before the tragedy at Sandy Hook Elementary, where kindergarteners and first graders were murdered by an insane gunman. After the shooting, the comedian/actor was very vocal with his anti-gun feelings, going so far as to shoot a College Humor video where he portrayed former NRA figurehead Charlton Heston singing a country-western song called “My Cold Dead Hands,” a video that, even to the most hardened anti-gun advocates, could at the least border on poor taste. He was, predictably, lambasted in some corners for this and celebrated in others.

Either way, he had placed himself at the center of the gun-control advocacy universe. All of this, again, happening AFTER he had filmed Kick-Ass 2. So when he saw the movie, and he saw the level of violence in front of him (it’s one thing to KNOW a movie is going to be violent, even one you’re in; it’s another thing entirely to SEE that violence unfold on-screen) he decided it would be hypocritical, given how far he had thrown his hat in the anti-violence ring, to endorse the film. 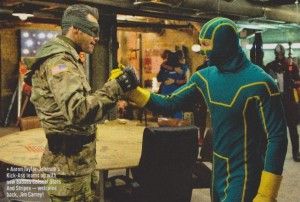 At the very least, I have to give the man credit for staying true to his principles.

Still, I don’t for a SECOND believe any sort of sane individual would be triggered to violence just be seeing a hyper-violent film. I also don’t think Jim Carrey believes that, either. Still, perception is nine-tenths of reality. The perception of Jim Carrey is now that he is passionately anti-gun, and those on the other side of that issue would be silly NOT to attack the man if he went around praising this almost comically violent film.

All of this talk actually got me to thinking: I didn’t read Kick-Ass 2, the comic. I picked up an issue in my LCS and I thumbed through it. I got to a point, and I remember this distinctly, where Katie (Kick-Ass’ crush) was raped by the former Red Mist and his gang, and I put down the book, never to pick it up again. I didn’t want to read that. Am I a wimp? I don’t think so. I mean, yes, I am, in other ways, but not in this instance. Like Jim Carrey now, I couldn’t justify putting down my four bucks or whatever weeklies cost then for a book depicting rape as just another plot point.

Mark Millar has said about the rape in the book, and I’m paraphrasing here, is that it’s just another way to show that evil people are evil, that to him rape is on the same page as (and perhaps even not quite as bad as) beheading or decapitating somebody. 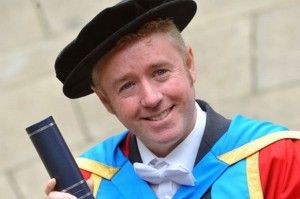 The argument, of course, is that in the instance of rape, AT LEAST the victim is still alive. If you’re beheaded, you’re probably not. But beheading is rare, to say the least. It’s comically over the top. When the Punisher guns down eight dozen mafia guys, it’s make-believe. It’s fantasy. We don’t deal with it in real life. When a woman gets raped, in a comic book or anywhere else… has Mark Millar studied the statistics on sexual assault? They’re not hard to find. 1 in 6, according to some recent studies. That’s the number of women, according to RAINN (Rape, Abuse, and Incest National Network), who are victims of either attempted or completed rape in the U.S. It proves harder to find beheading statistics, but I’d be willing to bet American cash money that far less than 1 in 6 Americans are victims of either attempted or completed beheading.

Here’s the thing about the Kick-Ass books: they, ostensibly, are ‘real’. As in, “What would happen if REAL people decided to become superheroes?” They aren’t real, though. Far from it. The violence and alpha-fantasy wish fulfillment in the books isn’t from any reality I know. I’ll put it like this: the rape of Katie in the comic book (and the attempted rape of Night-Bitch in the… really? ‘Night-Bitch’? That’s her name? Mark Millar, you kind of suck.) Anyway, the attempted rape in the film and the rape in the comic are used as plot devices to spur the hero, Kick-Ass, into further action. In reality? In either instance? If Kick-Ass is anywhere near a decent human being? He stops fighting crime, takes off his mask, tells the police everything he knows, and the rest of the movie/comic book series is about the recovery and rehabilitation of the girl who was sexually assaulted. But no. As presented in the world of Kick-Ass, the rape scene is just another disturbing ‘Women in Refrigerators’ moment.

So yeah, I don’t think I’ll ever read Kick-Ass 2, and… okay, I’ll probably see the film at some point, but I’m not going out of my way to do it anymore. What’s my point? My point, I guess, is that even though I don’t think media violence breeds reality violence in the mind of the sane, I respect Jim Carrey’s stance on this one. Kick-Ass 2 probably got MORE press because he refused to do talk shows for it, and he gets to walk away with his principles intact. That’s a win/win, for the actor and the studio.

The only loser in the whole thing, as it turns out, just might be good taste.

Tom Hoefner (@TomHoefner on Twitter) is a playwright, theatre director, college professor, and would-be novelist living in Brooklyn with his wife and daughter.