Sometimes a fun thing to do is to pretend that a movie is being made based on a beloved comic book character or superhero, and then to go ahead and mock-cast that character’s universe with beloved 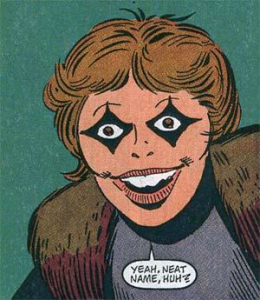 actors of the day. Sometimes it’s fun to do that.

However, now that every superhero in the Marvel and DC stables is slated to get their own movie, thatfun thing is now somewhat less fun. (BREAKING: Lady Gaga will play Squirrel Girl in the Great Lakes Avengers movie. I made that up.)

So wanting for any superhero properties that have yet to be announced as being in feature development, I will instead discuss a few of the recent more interesting actual (or in some cases heavily rumored) casting decisions for a number of characters set to make their big-screen debut in the next year or three. As always, I have done heavy research into the inner workings of the Hollywood machine to discern for you, the fair reader, who is slated and rumored to play whom. I mean, I did at LEAST five minutes of Googling for this. Also as always, I will discuss only those that interest me. The exclusion of any actor/actress/character will be startlingly arbitrary.

Marvel’s The Avengers: Age of Ultron

This is the announced sequel to Marvel’s The Avengers blah blah blah I don’t really need to tell you about this, do I? Mark your calendars and get in line, this could be two hours of Joss Whedon farting into a paper bag and you’d sit through it and you’d say, “Please, sir, may I have some more?”

Inspired casting, and not just because Spader is uber-creepy and vaguely inhuman on his hit NBC show The Blacklist. He was also uber-creepy and vaguely inhuman on his hit ABC show Boston Legal, and, well, I’d wager just about everything else he’s been in. He will not just be voicing some CGI robot, it’s been concerned; he’ll be on-set and everything, presumably doing some significant level of motion capture work. Just when you thought James Spader couldn’t sink any further into the uncanny valley…

Michelle Tanner’s little sister and Kick-Ass: together at last. Rumor has it that the character dynamic of these two is going to borrow a great deal from the vaguely (and by vaguely I mean overtly) incestuous relationship of the Ultimate Universe version of the two of them. Yay. At least they’ll look good while creeping us all the hell out.

Okay, for all that I crap on Warner Bros./DC for their cinematic efforts (and it’s a lot), I have to say that their latest round of casting info for the high-hopes Batman Vs. Superman is very, very intriguing. In a good way. Also, The Dark Knight Rises actually wasn’t very good. (That was just to even things out.)

I understand the Internet had some hate for this one? I like it already. No, wait: I love it. Inspired casting. Brilliant. My excitement quotient for this film just skyrocketed. I’m not being sarcastic.

No problems here. She claims she wants not to be a movie star, but an action star. That’s the mindset we need from our Wonder Woman. Moving along…

If you don’t like this choice, you’re un-American. Or un-British. Whatever, I don’t care. He should also play the Doctor if they ever do a Dr. Who movie. I don’t watch the show, so that was probably a terrible suggestion. God save the queen.

Look: before you say, “Holy goat fish, are they really making an Ant-Man movie?!” I want you to remember that you said that about Thor and Iron Man, and those worked out pretty well. Also, the Scott Pilgrim guy is making it. And it’s going to be an action-comedy. This might end up being the best superhero movie ever made.

Yes! Paul Rudd, who I will pay American cash money to watch in anything at any time, anywhere. Also, he does not age. There’s a decrepit old oil painting of Paul Rudd in some Hollywood storage unit somewhere.

Remember when Captain America was the Human Torch? Sadly, so do I. The original two Fantastic Four movies, in spite of getting the casting choices for Johnny Storm and Ben Grimm pretty much perfect, were terrible in every other way. I don’t know about you, but I would have much preferred big purple hat Galactus (or even giant mosquito-based Ultimate Galactus) to foggy cloud nebula vapor Galactus. So, yes, while reboots that happen within the same generation of the original superhero movie really only exist so that a studio can hold onto valuable franchise rights, the Fantastic Four really could use a movie do-over.

I have to admit: I know very little of the work of any of these actresses but to say I know I’ve seen Emmy Rossum in some things and she seems very talented, even when surrounded by the wretchedness that was Joel Schumacher’s The Phantom of the Opera. As far as I’m concerned, each and every one of them could play Sue Storm (and just from appearances they all seem more appropriately “girl next door”-ish than Jessica Alba), but consider: it’s rumored the filmmakers are considering casting a female Doctor Doom. Acting, wardrobe, hair, and make-up are all wonderful things, but none of these lady’s red-carpet photos scream to me “SO SWEARS DOOOOOM!” Also, I don’t know how to pronounce “Saoirse”. That’s on me.

He’s a tad pretty-boyish to play Reed Richards for my taste, but who isn’t a tad pretty-boyish in Hollywood? Jonah Hill aside. Hey, when do we get Leo DiCaprio in a Marvel movie? That would be pretty dope. I’m stalling, obviously. I have no idea who Miles Teller is.

Josh Gad, who you know best as Olaf the Snowman from the recent Disney animated musical Frozen. I love me some Josh Gad, who also starred on Broadway in The Book of Mormon. But as Ben Grimm? Look: remember when Kevin Smith got a job writing Superman for Warner Bros. because his characters in Mallrats made a bunch of Superman and Lois sex jokes? Well, Josh Gad being attached to a project as a superhero, I think, might stem just from this song (NSFW): http://www.youtube.com/watch?v=rHDtwNX72G4

Okay, now we’ve gone TOO FAR. Let me ask you: when in the comics, EVER, do you remember the Human Torch as HAVING A MUSTACHE?

I’ll show myself out.

Tom Hoefner (@TomHoefner on Twitter) is a playwright, theatre director, college professor, and would-be novelist living in Brooklyn with his wife and daughter. If you’re anything like him, you’re on pins and needles awaiting the announcement of which dashing young Brit has been cast as Newt Scamander in the upcoming Harry Potter spin-off, Fantastic Beasts and Where to Find Them.

Check out his poorly named blog, where you’ll find more nerd-stuff, as well as his writing about writing, food, theater, the New York Mets, Fantasy Baseball, and the WWE: http://ploopet.blogspot.com/