It has taken two weeks, but I’ve done it. I’ve finally done it.

I’ve made it all the way through Maximum Overdrive.

What’s that, you say? You don’t know what that is? Allow me to enlighten. Maximum Overdrive is a film written and directed by the master of American horror, Stephen King. Problem: Stephen King is the master of American horror PROSE. His film work, of which Maximum Overdrive is the only available example, makes Ed Wood look like Cecil B. Demille. And it makes Cecil B. Demille look like Steven Spielberg.

Okay, so, “plot”: a comet flies past the Earth and the Earth’s orbit brings the planet into the comet’s tail, where it will find itself for eight days. Of course, this brings all (some) machines to life, and they immediately start hunting down humans. Big ol’ trucks are the main culprits, it seems, and they’re “led” by a runaway truck for Happy Toys that wears a big ol’ Green Goblin mask on its front grille.

I know I dig on a lot of fantasy and sci-fi and superheroes and such, and a lot of ridiculous stuff happens in those genres, and I’m cool with that. There is, though, a fine line between “believable” and “craptacular” when it comes to fantastic story elements, and I spent most of the movie trying to force my brain around the idea of 1970’s machinery that really isn’t that far removed from steampunk tech suddenly gaining sentience. And the rules of the universe don’t really work: why does this machine come to life, but not that machine? Is it only machines with a fuel source? Then isn’t it really the gasoline or electricity that has come to life? I’d believe that more readily.

Remember how much casual cursing there used to be in movies back in the 80’s? You will.

Also, this: I get that this was a low budget flick. I get that. The movie, though, starts off with some cool stuff. ATMs cursing out customers, drawbridges rising on their own, causing chaos in city streets as cars crash into each other and drivers are thrown cartoonishly from their vehicles, a little league baseball team and their coach getting pelted to their death (and in the nuts) with cans being shot out of a vending machine. This stuff makes up the GOOD part of the movie, cool in a “hey wow isn’t THAT some schlocky violence?” kind of way, and you realize that if it’s THIS kind of movie, with people dying in stupid, overdone, spectacular ways every two minutes, you can roll with that. 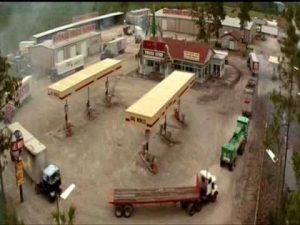 But then by the ten minute mark or so, we settle on where our focus will sit for the rest of the flick: some out of the way dirt-road podunk truck stop filled with drunk truckers and a slutty hitchhiker and Emilio Estevez and Commissioner Gordon and Lisa Simpson. For, no joke, an hour and a half, we watch six or seven big rigs circle slowly around the truck stop while the occasional human runs out to play chicken with them, ending up either dead or back inside (which really isn’t much better), and the whole time we’re wondering, “Why the hell don’t those trucks just ram straight into that flimsy-ass truck stop?” Which they finally do, at the end of the movie. After the humans have escaped the place. Through the sewer.

Look, there’s no two ways around it: this movie is a piece of garbage. It’s demanding to be given the MST3K or Rifftrax treatment. The lapses in both character and storytelling logic on display in Maximum Overdrive are amazing. Example one: this little military vehicle with a single mounted machine gun rolls up to the diner at one point; it’s like the bastard child of a tank and a Radio Flyer wagon. The thing opens fire on the diner, and we’re treated to thirty seconds of camera pans to the chosen red shirts who were too stupid to dive to the ground getting blasted away one by one. HIT THE DECK, REDNECKS! HIT THE DECK! 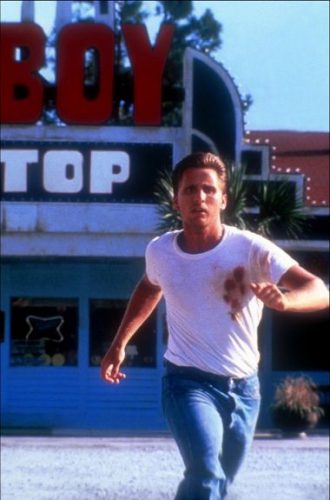 Example two: The survivors make their great escape to a local marina, where they blow up some more trucks, hop on a sailboat, and sail off into the sunset… well, sunrise. Same diff. A title card tells us they escaped to an island (called Haven; Stephen King has never been a fan of subtlety) where they waited out the vehicle revolution until the Earth fully passed through the comet’s tale… and then a Russian “weather” satellite nuked a lurking UFO out of the sky.

And THAT part isn’t even the illogical storytelling I was talking about! At the marina, our merry band of geniuses get on a sailboat docked snugly amongst several powerboats, and through the whole sequence I was thinking, “Okay, the motorboats are going to fire them up and high-tail it after the sailboat right… now! No. Right now! No. NOW! Nope. Now? No? Huh… okay, then.”

It never happened. Why not? Are they saving that for the sequel? Maximum Overdrive: Cruise Control? Hey, waitasecond…

So why did I review this turd from ’86? If you’re a frequent listener of the SMC podcast, you’ll know that Maximum Overdrive is a favorite flick of our host-with-the-most, Tim Morse. I don’t know why, either. But I don’t need to know why. Why do people like Twilight? Why is there a sub-culture of Bronies, male fans of My Little Pony? (True story, look it up.) Why do I root for the Mets? People like what they like, and why not? Let ‘em eat cake, I say. Tim digs on Maximum Overdrive, then Tim digs on Maximum Overdrive. Rockstar. More power to ‘im. Should it matter that Stephen King has since referred to Maximum Overdrive as a “moron movie”, or that he admits to having been “coked out of his mind” while shooting it? No it should not, and in no way am I saying that Tim should stop enjoying this film out of which he has already gotten such great enjoyment.

I’m just saying that maybe he and I and the rest of the podcast crew need to have a little chat.

Tom Hoefner (@TomHoefner on Twitter) is a playwright, theatre director, college professor, and would-be novelist living in Brooklyn with his wife and daughter. While there is no RiffTrax of Maximum Overdrive available, it WAS reviewed for Cinemassacre by The Angry Video Game Nerd, although he spends half of his review super-imposing AC-DC music over other movies. Check it out here.

Oh, yeah. AC-DC did the score for Maximum Overdrive. Take from that what you will.