It’s taken me awhile to get around to this, but yeah… I saw Man of Steel. I couldn’t bring myself to write about it immediately after seeing it, and I couldn’t figure out why. Now I have. More on that in a bit.

It was this past weekend that did it. I don’t know if you heard, the Internet was pretty low-key about it, but there was a comic book show in San Diego. Apparently they do this every year? It’s actually a show for movies and TV shows and stuff but sometimes somebody mentions something about comic books there too. Anyway. So Warner Bros. gave a presentation there… again, you may have missed it… and at the end of the presentation they announced their follow-up to Man of Steel would be Batman vs. Superman. 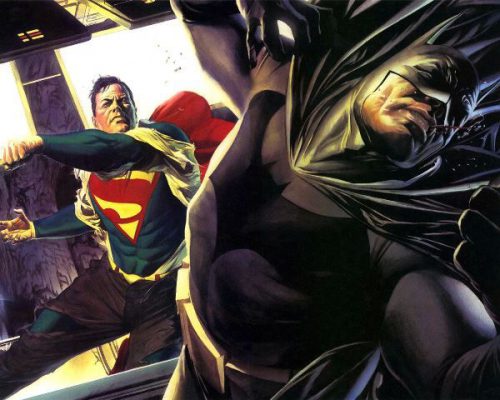 That’s right. Henry Cavill’s Superman is going up against a brand new non-Newsies cast member Batman. Frackin’ awesome, right? So I wish the idea of the whole thing filled me with eager sillies and not just a gnawing sense of dread.

My early post-Man of Steel discussions with friends seemed to involve a lot of earnest back-and-forth of what we should all really appreciate about the movie. (“Boy, they really got his power set right!” “Man, it’s good to see a Superman who is REALLY ripped.” “Superman actually fought someone in this one! Awesome!”) Every conversation seemed to end with somebody making the following observation: “It was a TON better than Superman Returns.” Well, sure it was. But a five pound turd is better than a ten pound turd. It’s still a turd, though.

Even with our REALLY REALLY EARNEST OPTIMISM about what we LOVED LOVED LOVED about Man of Steel… things crept in. Annoying things. Irksome things. Things we kind of mumbled at half volume, knowing they needed to be out there but wanting to get past them quickly. (“I mean, I guess they could have had SOME humor in it.” “They spent a whole lot of time talking about Krypton and genetic codes and stuff, huh?” “Did they really destroy half of Metropolis? In the first movie? And nobody seemed to care?” “That was just kind of a punching contest at the end.”)

It went on like that. Those are just some samples. Please, feel free to insert your own nitpicky OKAY THIS KIND OF BOTHERED ME BUT IT WAS STILL AWESOME observations in the comments below.

Screw it, though. I’m not in the business of making excuses for Warner Bros. and DC, and the more time I spend away from Man of Steel the more my true feelings on it fight their way to the surface, and those true feelings are this: I did not think it was very good. They came SO CLOSE to being really, really RIDICULOUSLY good, and they had some crucial working parts there: the Kryptonian segments looked amazing. Henry Cavill was great, looked great, could be a great Superman going forward. The flights and fights were stellar. But did it have to be SO melancholy? Did there have to be SO much stoically and quietly staring off into the yonder whilst Maximus waxed poetically about the potential of the human race? Superman interacting with human-type people was a joy to watch. Couldn’t we have had some more of that? COULD WE STOP WITH THE CHRIST IMAGERY IN SUPERMAN MOVIES PLEASE? And did anyone else notice that they stretched about an hour’s worth of plot into two and a half hours?

See, Warner Bros., I get that you might want to do something different than Marvel Studios and Disney. I get that you look at the Nolan Dark Knight trilogy and think THAT’S your superhero path. You’re missing something crucial, though: Nolan’s trilogy was a very specific vision from a very specific auteur. The Batman mythos is better for their existence… but they are NOT direct translations of Batman, and by the third movie the style was wearing thin; truth told, I find The Dark Knight Returns just about impossible to re-watch (and I can’t watch Bale’s Batman anymore without thinking of the guy from the College Humor Badman sketches. Kind of ruins the whole thing.) I’m sure Man of Steel made a truckload of money. I haven’t checked; I assume you’re all doing just fine, financially speaking. But there’s a reason that all the Marvel Studios Avengers-verse movies were so successful: they were fun.

Why couldn’t you have made a Superman movie that was, above all else, FUN? 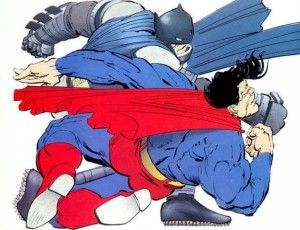 Because Man of Steel was a lot of things, but it was not fun. Like The Dark Knight Returns, it was at times uncomfortable in its brutality. Example: as a lifelong New Yorker I admit I may be overly sensitive to this, but Metropolis collapsing in on itself brought back some very hard memories of 9/11. I know, yes, in The Avengers a big chunk of NYC was destroyed. But that was the CLOSING ACT of Marvel’s movieverse 1.0. Man of Steel was your OPENING act. If you destroyed Metropolis before the Act 1 break, what the hell are you going to do for an encore?

Which brings me back to the recently announced Batman vs. Superman. This is a concept that we should all be 80’s California surfer dude stoked for, but I find myself terrified, Warner Bros., that you’ll forget to put in the element that made most of us love superheroes in the first place: fun. Superhero adventures are fun. So please, make your heroes fun again, Warner Bros. Make them fun. Is that so much to ask?

Oh, and put Robin in the next movie. Thanks!

Tom Hoefner (@TomHoefner on Twitter) is a playwright, theatre director, college professor, and would-be novelist living in Brooklyn with his wife and daughter. He really misses Chris Reeve.