My daughter attends kindergarten in the fine educational utopia of the New York public school system. (There is surprisingly little irony in that first sentence; NYC school teachers are awesome.) Most every morning, I am the parental unit who either drives or walks her to school. Since this past Monday, outside of her school there have been three blocks worth of cranes and trucks and other heavy equipment, and all sorts of orange cones for me to dodge around as I scrambled for a sliver of sidewalk alongside of which I could pull over. Con-Ed, I assumed, working on the power lines; just boring utilities stuff. I paid them no heed. It wasn’t until Wednesday, on a day my wife was driving with me, that she first noticed and pointed out that, no, these people WEREN’T from the power company, easy to realize now as the number of trucks had tripled from the first day and the entire project had spread to cover three Brooklyn blocks. Grips carrying lighting rigs, some giant spotlights, cables running the length of the street, a “Paramount Films” logo on the side of one truck… CRAFT SERVICES!… this was a movie shoot! 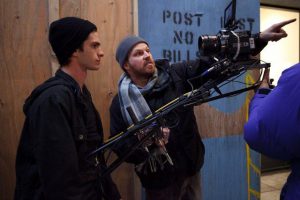 Boring stuff. We dropped off our daughter and paid them no heed.

And then, on Thursday night, my wife looked up from Facebook and said, “Did you know that the movie they’re shooting next to Gabby’s school is Spider-Man?” I did not. How did that escape my notice?! The Amazing Spider-Man 2 was filming RIGHT NEXT DOOR to where my daughter goes to kindergarten! That explained the young boy babbling excitedly about Spidey on Tuesday morning. That’s right, a first-grader was more in-tune than I was to the presence of real-life fake superhero bidness going on right under my nose! Friday morning, when I dropped my daughter off, the trucks were still there. Spidey was still in the vicinity!

Boring stuff. I dropped off my daughter and paid them no heed.

If you live in New York, or Los Angeles, or Toronto, or anywhere where film shoots are common, there’s something you learn very quickly: there are few things on this Earth more boring to watch than a major Hollywood picture being made. Snail racing, and this is not an exaggeration, offers more thrills-per-second than movie making.

I have no shortage of personal encounters with which to back this up. INCIDENT 1: Cop Out, the unpopular Kevin Smith film starring Bruce Willis, Kanye Jordan, and Stifler, shot many sequences in a diner in Bay Ridge, a Brooklyn neighborhood ten minutes from our apartment known for its restaurants and shopping and night life and absolute lack of available parking. At one point you could see the back of Bruce Willis’ head. Also, Kevin Smith IS too fat for forty. (I love you, chubby man. But maybe stop talking so much sometimes.) 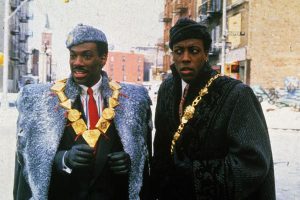 sode of Law & Order shot at the college where my wife and I both work. It happened while we were in the final week of rehearsal for a play. (To be fair, there are few places in New York where Law & Order HASN’T shot.) An entire building of the school was shut down. Any excitement generated by the presence of guest star Angela Lansbury on campus quickly faded away into a general headache of nuisance. RELATED: our campus is in the historic neighborhood of Fort Greene. It’s the one that was a stand-in for the Huxtable residence on The Cosby Show, with all the old brownstone homes that weren’t worth an old Superman comic thirty years ago but now go for upwards of $2-$3 million. There’s a film shoot almost every week around those parts, TV or Hollywood or indy or student. Once an entire block was filled with old-timey cars. I have no idea why. Another time my wife got giddy because Sex & The City was shooting nearby. (We all have our own heroes.) The college turns away production companies on a regular basis; despite the lofty fees producers will pay for locations, the thrill is gone.

INCIDENT 3: This wasn’t me, actually. My sister’s friend from high school almost rented her home to the producers of Eddie Murphy’s Coming to America, but they didn’t want to knock down a wall in their living room to make room for the cameras. Snobs.

INCIDENT 4, 5, 6, 7, and 8: Oddly, this isn’t the first time Spider-Man and I have crossed paths. While I was in college they were shooting the first Spider-Man in Queens. I learned one evening where a sequence was being filmed, so I hopped in my car and drove straight over there. After parking and standing around with a small crowd for about half an hour watching Teamsters drink coffee, I figured that maybe this wasn’t going anywhere anytime soon. I wandered off, but I DID catch a glimpse of some really crappy-looking webbing props in the back of a truck (it tak 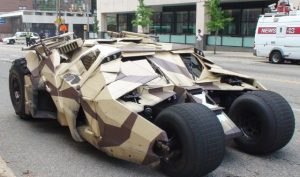 es a lot of movie magic to make practical effects look not-awful) and a fan dressed as fat Spidey. I found out a few days later that they had been filming Tobey Maguire’s stunt double running across rooftops in what turned out to be part of Peter’s first after-school web swinging attempt. (Years later, when my wife and I got our first apartment together in this same Queens neighborhood, I realized that hanging on the wall in the convenience store on our corner was a picture of the store’s owner and Sam Raimi, grinning. The store had been used in the shooting of Spider-Man, as the backdrop for one of the eyewitness accounts of Spidey’s early career.)

Right after college I worked in an office in the midtown Manhattan, and is it turned out they were shooting Spider-Man 2 in several locations just blocks from where I worked. There was a sequence set up down one street, in a gap between two buildings; I’m pretty sure that turned into a portion of the scene where Spidey’s powers conked out and he crashed to the ground and groaned about his back and we all said, “Maybe this wasn’t the best guy for the part, come to think of it.” There was a Daily Bugle delivery truck parked at an intersection on the corner of my office; don’t know what they used it for, and it was gone after two days.

I knew it was Spider-Man 2 shooting nearby, see, because about six months earlier I had been on my lunch break, walking through the straights of Manhattan on my way back to the office. A light snow was falling and I was on my way from the comic book store, my books tucked in a brown paper bag in my jacket under my arm, lest they get snowed upon. New York power-walking down the street, a woman wearing a brightly colored ski-style jacket and holding a camera jumped out at me. “Excuse me!” she was quick to get out, understanding that my first instinct as a New Yorker would be to 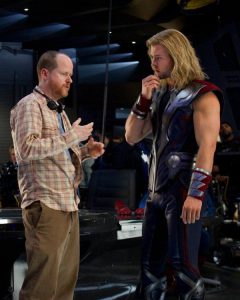 pretend she didn’t exist. “Could you help me out?” She pulled an ID badge on a lanyard out from within her jacket. On one side it said “SONY Pictures”. On the other, it said “Spider-Man 2”. She explained she was doing advance location scouting for the film, and she wanted to know if I’d take a few minutes to help her out. I was 23 or so at the time, a skinny white dude with floppy brown hair and glasses. All she wanted to do, she said, was get some pictures of me standing on the sidewalk looking grim-faced and up at a clock tower that overlooked the park across the street, both from a distance and then right at the foot of the tower.

Translation? She wanted me to stand in for Peter Parker, looking up at the structure where (I’d later discover) Dr. Octopus was holding Aunt May hostage.

We took our shots, several minutes worth, and she thanked me, and then I told her where I had been coming from and pulled my Spider-Man comics out of my jacket. She got a kick out of that, and she snapped a quick pic of me holding the book and giving a thumbs-up, the clock tower in the background. “For Sam,” she explained.

Look, movies are awesome, superhero movies doubly so. But the process of making them is long and difficult and arduous, workmanlike and tedious and not-glamorous. Yes, when Marvel’s The Avengers or The Dark Knight Rises shoots in your city, and you wait around watching long enough, you may eventually catch a glimpse of a couple of Tumblers rolling down the street in front of an angry mob and a Catwoman stunt double, or you may get to see Captain America and Thor pretend to beat up a bunch of guys in skin-tight green spandex suits, but thirty seconds after all this begins someone yells “CUT!” (that actually happens, BTW) and then everyone stands around for an hour or so while the shot gets reset, so they can do the same exact thing again.

Still, the thought that your favorite heroes are being brought to life on the very streets and thoroughfares where you in-real-life live has a certain excitement and buzz to it. (The biggest cheer Spider-Man numero uno got when it unspooled in Queens movie theaters was in the first five minutes, when Mary Jane points out to the school bus driver that Peter has been chasing the bus since Queens Boulevard. I go to the mall there!) As for me, I’m content with closing the book on my film career as it stands, having gotten to, in some small way, for one short moment, play Peter Parker. And it’s a buzz, man, it really is, knowing that at some point in the pre-production of Spider-Man 2, someone handed Sam Raimi a picture of me as Peter Parker, looking to the sky, and he glanced down at it ever-so-briefly and grumbled, “Pass.”

Because they didn’t actually use that clock tower in the movie.