It was about halfway through The Dark Knight Rises, the final chapter in director Christopher Nolan’s triumvirate of Batman films, that I realized something: these movies aren’t about Batman.

More on that in a bit.

The Dark Knight Rises is a worthy bookend to Batman Begins, though the best pure movie experience of the three remains the second chapter, The Dark Knight, driven as it was by a once-in-a-tragically-short-lifetime performance from Heath Ledger and the taut, tight precision of an excellently executed cop thriller. The Dark Knight Rises, by comparison, is an epic, heady, lumbering film, noticeably lengthy and perhaps a bit too full of the political and social commentary that Nolan may or may not have been firing across our collective bow.

The film is a series of body blows, one after the other, a twelve-round prizefight with the heavyweight champ. It leaves you with contradictory feelings of elation and defeat: it beats you down, heavy losses are sustained, but you ultimately are able to scratch and claw your way to the top of the pile, digging through the rubble atop of you until a single shaft of light gleams through. 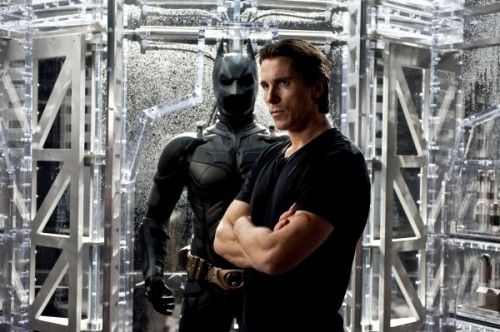 It’s a film that draws inspiration from F. Scott Fitzgerald, Charles Dickens, and Frank Miller, reaffirming that old chestnut of writing: if you’re going to steal, steal from the best. Eight years after the events of The Dark Knight, Gatsby… I mean, Bruce Wayne (Christian Bale)… is a crippled recluse, limping around his desolate manor with a cane, the cowl retired in faux-disgrace since the fateful night of Harvey Dent’s death. An accidental intervention from master cat burglar Selina Kyle, (Anne Hathaway) caught and then escaping while in the act of lifting Bruce’s prints along with his mother’s necklace from the Wayne family safe, gets him out and about again, and soon he finds himself crossing paths with Bane (Tom Hardy), a hulking outcast from the League of Shadows, the centuries-old group of city razers formerly run by Batman’s now-deceased mentor-turned-mortal enemy, Ra’s al Ghul. Bane is hellbent on bringing Gotham to its knees, this time through some Tale of Two Cities-style class warfare. The Beast breaks the Bat and damns him to Hell, a prison pit in the Middle East, then returns to Gotham to finish orchestrating the city’s demise.

Hey, a lot happens in this flick, and at pushing three hours long, a lot SHOULD happen in this flick. In addition to everything described above, ample screen time is given to series stalwarts Alfred (Michael Caine), Jim Gordon (Gary Oldman), Lucius Fox (Morgan Freeman), as well as newcomers Joseph Gordon-Levitt as an idealistic young cop and Marion Cotillard as a millionaire investor tapped to save Wayne Enterprises from the machinations of Bane. 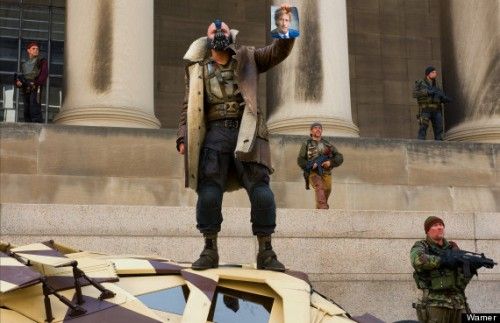 The film lacks the streamlining of its predecessor, but that luxury was exchanged for an expansion of scope. This is a massive film, and as stated above, a pounding film. Bane and Batman’s initial confrontation plays out with bone-crushing blow after bone-crushing blow; if a more brutal physical  exchange has ever unfolded on film I certainly can’t recall it. The movie is big, it is wide, it is epic, it is exhausting, and much like The Dark Knight before it, it doesn’t feel like a superhero film so much as it feels like a FILM.

The performances across the board are impeccable; no surprise given the level of acting talent involved. Over three films, Nolan and his ensemble have given us the definitive on-screen interpretations of Bruce Wayne/Batman, Ra’s al Ghul, Commissioner Gordon, The Joker, Scarecrow, etc., etc.; Tom Hardy’s cerebral, brutish Bane can certainly be added to that list, and while I may be a sucker for Julie Newmar, Anne Hathaway’s Selina Kyle has enough of that same playful vamp in a performance still rooted in the reality of Nolan’s landscape to come in a close second among the pantheon of Catwomen. Truth told, Catwoman, perhaps, wasn’t NECESSARY to the unfolding plot of the film, but her presence was; she is the one character to add some lightness and humor to the proceedings, and the disappearing act she at one point pulls on Batman leads to the film’s best line. Oh, and Joseph Gordon-Levitt and Marion Cotillard don’t play characters from the comics at all. Really. I swear. (Was that convincing enough?) 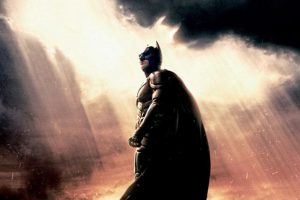 Back to my original point, though: this film, and in fact this entire trilogy, isn’t really about Batman, which is ironic when you consider that Christopher Nolan’s hyper-real vision of the Bat-universe turned out to be the most accurate adaptation of the comic books we’ve ever seen. For three movies Nolan and his screenwriting collaborators, his brother Jonathan along with David Goyer, have cherry-picked Bat-history to liven up their wholly original story with more than a taste of some of the best Batman comics ever published. The DNA of The Long Halloween, The Dark Knight Returns, No Man’s Land, Batman: Year One, and more can be found imprinted on the genetic code of this Dark Knight trilogy. Still, Nolan has given us a series of films not so much about Batman as much as he his given us three films chronicling the war for the soul of Gotham City. The Batman is representative of the state of Gotham’s soul, a dark avenging bogeyman appearing out of nowhere when a last-ditch attempt is called for to keep the city from eating itself alive. In Nolan’s universe, so long as Gotham is at peace there will be no Batman. The fate of Bruce Wayne and his alter-ego is tied, symbiotically, to the fate of Gotham; one will live and die alongside the other.

To that end, The Dark Knight Rises provides thematic conclusion to the three-part story, overdrawn though this final chapter may be. Somehow, the thing is hammering and brutal and yet manages to still be fun, and you certainly walk out of the theater feeling as though you’ve gotten your money’s worth. This is a film that is ambitious almost to the point of absurdity; while most of the time Nolan and company reach their aspirations, there are those moments when you realize you are watching a VERY SERIOUS MOVIE… but one starring a guy in a rubber cape and mask, and then all of the film’s leaps and bounds toward respectable cinema trip over themselves, the whole film falling down on its face as a result.

No worries, though. The fall is only momentary. Soon another moment of cinematic magic wows and allows us to re-suspend our disbelief. So much like Bruce Wayne himself, the film gets back up, and at the end of it all we have what we came for: an ultimately satisfying conclusion to this story of a city’s salvation.

Tom Hoefner (@TomHoefner on Twitter) is a playwright, theatre director, college professor, and would-be novelist living in Brooklyn with his wife and daughter. For a big chunk of The Dark Knight Rises, he kinda felt like Jeff Goldblum in Jurassic Park: “Now, eventually you do plan on having Batman in your Batman movie, right? Hello? Yes?”