Avengers... The Dark Knight Rises… The Amazing Spider-Man… I’d say we had a pretty successful summer at the cinema. We got three comic book superhero films that all arguably fall somewhere between “very good” and “superb”. These are the ones we remember, the ones that define a genre.

These and, of course, the ones that are so butt-splittingly awful that the memory of them permeating our subconscious wakes us up at three A.M. soaked with the night sweats (not to be confused with the meat sweats, an entirely different type of sweats.)

Awesome and awful: the two extremes. Human beings tend to remember the extremes. It’s the in-betweens that slip through the cracks of our memory; in this case, the superhero movies that weren’t good enough to warrant repeat viewings or DVD purchases, but also weren’t bad enough to inspire a whole lot of internet vitriol.

That’s kind of how I look at Green Lantern, the ultimate in-betweener, the movie that was never going to work, and in spite of the best efforts of many, didn’t. Big budget? Check. Bankable star? Check. Major marketing campaign? Check. A hero at LEAST as recognizable as Thor? Check. A concept that’s accessible to a mainstream movie audience? 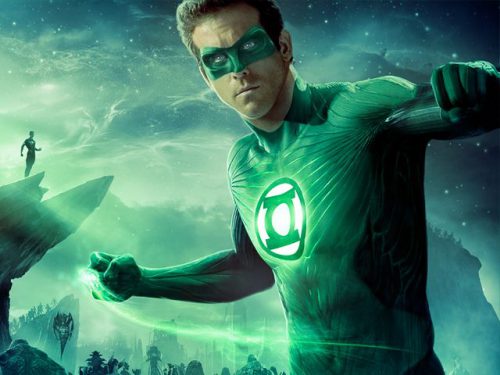 Not so fast there, checkmeister.

Green Lantern: Rebirth is one of my favorite minis of all time. We’ve discussed this on the podcast; I think it’s a wonderfully illustrated and scripted story, the best possible example of how to make a retcon work. So when I saw the first trailer for the Green Lantern film, and saw how closely it hewed to the Rebirth storyline, and realized that Geoff Freakin’ Johns was involved… well, my first reaction was one of giddy excitement; they had chosen what is possibly the best-ever Green Lantern story to turn into the first-ever Green Lantern feature film!

My second reaction was a bit more grounded, as I thought to myself, “Wow. This will never, ever work.”

Yes, Rebirth is great. Unfortunately, it’s also so chock full of pseudo-science gobbledygook, mumbo-jumbo philosophy, and continuity-heavy plot points that removing the tale from the medium in which it spent 40 years cutting its baby teeth risks ruining all the comprehensibility of the story and neutering the dramatic stakes.

I mean, here’s the plot: A squad of intergalactic space cops recruits a hotshot test pilot Earthman to combat the evil alien ooze made of pure fear that is squooshing its way through the cosmos towards Earth, giving the pilot a glowing green ring powered by his own “willpower” that is the most powerful weapon in the universe… except against stuff that is yellow. It doesn’t work on yellow. 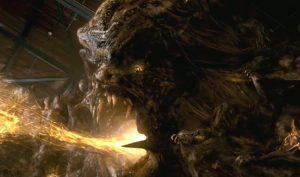 Sounds a little like a Roger Corman specialty, doesn’t it? Not quite as clean as, say, “A billionaire dresses up as a bat and beats up criminals to avenge his dead parents,” or “People are born with special powers that make them freaks and monsters in the eyes of the world they have sworn to protect in this very subtle allegory for racism,” is it?

To be fair, Warner Bros. and DC were stuck between a rock and a hard place. They couldn’t COMPRESS the Green Lantern story, getting rid of the space cops and the little blue guys, without pissing off their most loyal fanbase. They couldn’t EXPAND the story, bringing in the multi-colored rings powered by love and greed and rage and pasta and unicorns and what-not because, hey, were they going to make the whole idea even MORE unapproachable for the ninety-five percent or so of non-comics readers who were going to make up their target audience for the film?

Of course they weren’t. So we got a movie that tried to have it both ways: was the villain the giant cosmic wad of ectoplasm, the yellow smoky Galactus with a face? Or was it the scientist/doctor guy with the giant forehead? Or both? Or was it Sinestro, who needed to turn from Green Lantern to bad guy because, hey, that’s how it goes… but who was given no perceivable motivation to abandon his post when he does so in the movie’s post-credit sequence? (Why on Earth does ANYONE act surprised when these things pop up in superhero movies? If there aren’t at least three post-credit things going on in a capes and powers flick, I’m disappointed.) 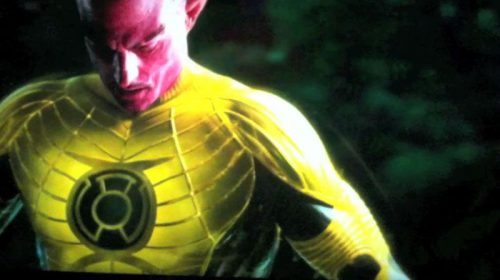 Green Lantern, as he is loved by his legions (or couple of hundred thousand) of fans, is the main player in a vast, epic space opera featuring barely coherent ring weapons of sort-of explained origins and powers. It’s big, it’s sprawling, and it’s a cosmic superhero book, something that not even comic book fans are always willing to embrace. But he’s a Justice Leaguer, and a DC B-lister, and again: somehow Marvel Studios made Thor work (something I can STILL hardly believe). So Warner Bros. had to try. They absolutely had to try. They can’t have the JLA movie they so crave without a Green Lantern, not if they want to have any credibility with their rabid core audience. And they HAVE to have a Justice League movie that both the comics fan and the mainstream audience will except. Thank Marvel’s The Avengers for that. The Justice League movie IS coming, by God, by hell or by high water. Not doing it at this point would essentially say DC is conceding defeat to Marvel at the big movie box office, and that won’t be happening anytime soon.

So maybe Green Lantern gets another shot at the big time. Maybe there’s a way to tell his celluloid story in a way that satisfies both his longtime pulp-page fans, as well as Joe and Jane Summer Movie. Or maybe the rumors are true, and Ryan Reynolds will just show up as Hal Jordan in Justice League, and the events of his solo adventure will never be spoken of again.

You know what? That’s probably what’s best for everyone involved.

Tom Hoefner (@TomHoefner on Twitter) is a playwright, theatre director, college professor, and would-be novelist living in Brooklyn with his wife and daughter. They should really just put Jon Stewart in the Justice League movie and be done with it. Sorry, Hal.