Guess who’s back… back again…

Yes, I understand I can’t really pull off quoting Slim Shady, but, hey, who cares? In my non-virtual life I’m a college professor, but probably more identifiably a director of academic theater. Around the fall of each school year I get slammed in rehearsals for a musical (this year it was Jonathan Larson’s La Boheme-inspired rock operetta Rent), and then come the holidays, and grading finals and papers, and then it’s been two or three months and I haven’t written a column. 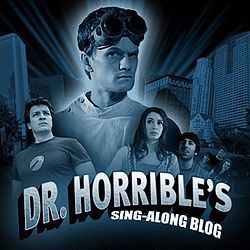 So, yeah. I spent two months this year up to my eyeballs in Rent, which is an incredible (if incomplete) stage musical. Note that I said STAGE musical. There is a film of Rent. It is… not good.

There are, however, several movie musicals that ARE good. And now I’m going to list them.

First of all: as always, I only considered feature-length theatrically-screened motion pictures, so don’t get all bent out of shape that I didn’t include Dr. Horrible’s Sing-Along Blog or that one episode of Buffy or something. Second: I DID include animated films, which I wasn’t going to do, but then I realized there were some animated musicals I REALLY wanted to put on here… though if I picked any I tried to pick ones that appealed beyond the “kids” market. Third: as always, my lists don’t skew towards the classics (i.e. old movies) because like Tony Stark, I’m a futurist. I’ve allowed one notable exception to my usual tastes in this regard. Fourth (this rules list is getting pretty long): You know, I had a fourth and I forgot it? Well, moving on. Fifth: Oh, now I remember! No movies-with-music. Just flat-out musicals. Which is why, much as I adore it, That Thing You Do! is not on this list.

So let’s turn this mother out:

10.) Grease – Some will kill me for putting this on here. Some will kill me for not putting it higher. Fun fact: Grease is one of those rare instances where the movie is at least 10 times better than the stage product. Young non-creepy John Travolta, Australian native Olivia Newton-John (Sandy is NOT Australian in the play, if you were wondering), 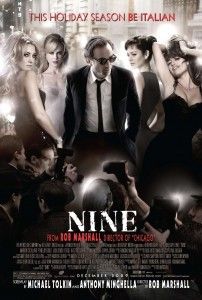 the role of Stockard Channing’s career… not to mention “Greased Lightning” which, while stolen from Kenickie and given to Danny for the film, is one of the most recognizable (and surprisingly dirty) modern American showtunes of all time. The less said about Grease 2, the better.

9.) Nine – I really didn’t make Nine number 9 on my list to be cute. It just worked out that way. Nine is a musical based on Federico Fellini’s semi-autobiographical film 8 ½, about an Italian filmmaker suffering through a midlife crisis that has left him with the movie director’s block. It’s also about all of the women he’s having sex with, including but not limited to his wife, and essentially blames all of the trouble besieging this brilliant artist on said women. Rob Marshall, director of Chicago (more on that later), is the man behind the lens of this one, which is a fantastic rendering of a musical with a troubled book and a beautiful score. Kate Hudson and Fergie each steal the show with their solos, and did you know Daniel Day-Lewis could sing? Neither did I.

8.) Beauty & the Beast – An Academy Award nomination for Best Picture separates Beauty & the Beast from the other two entries in Disney’s wonderful Menken/Ashman/Rice trilogy (The Little Mermaid and Aladdin, respectively). It’s a touching and sweetly-told romance, with a convincing faux-French score and an epic Broadway-big opening number in “Belle”, an over five minute long song-scene the likes of which had been previously unheard of in an animated musical (the tunes of which traditionally clock in at no longer than 3 minutes). It was tailor-made for expansion into a Broadway musical, which is exactly what Disney Theatrical did, making it the first of many Disney film-to-stage adaptations. Some of which are better than others, granted…

7.) Little Shop of Horrors – A movie based on a musical based on a 1950’s B-movie horror sci-fi flick (a flick 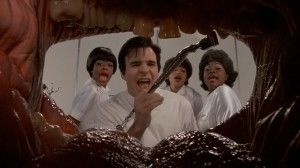 which is notable for featuring Jack Nicholson’s first on-screen performance as “dental patient”). I love Little Shop and it’s doo-wop rock score and man-eating plant designed by Jim Henson’s Creature Shop (Audrey II is a Muppet!) and song-that-wasn’t-in-the-stage-version-that-I-didn’t-include-when-I-directed-the-show-that-I-totally-should-have, “Mean Green Mother From Outer Space.” Steve Martin’s turn on “Dentist!” did two things: it secured this film a spot on this list, and it ruined that role for anyone else ever who has tries to play it.

6.) The Sound of Music – West Side Story. Mary Poppins. Annie. The Wizard of Oz. These are just some of the movie musical classics that did NOT make it to my list. (West Side Story: loses a lot going from the stage, where it is an other-worldly experience, to the screen, where it is just a movie. Mary Poppins: lovely, but at its core it’s a disjointed collection of vignettes more than it is a continuous story. Annie: meh. The Wizard of Oz: the existence of this film “classic” is what’s keeping us from a straight-up film adaptation of The Wonderful Wizard of Oz, and I hate it for that.) The one that holds up is The Sound of Music. Recently we saw the stage version recreated on NBC to great ratings and all-over-the-place reviews. (I liked it. Carrie Underwood can’t act but can sing, and everyone else was pure gold.) The 1965 film, though, showed us that The Sound of Music’s story (particularly the stuff on the mountains) works better on screen than on stage (or staged live TV). I’d argue it’s the greatest of the great Rodgers & Hammerstein scores, and more than Poppins this was Julie Andrews’ career-defining moment. Also, you know the 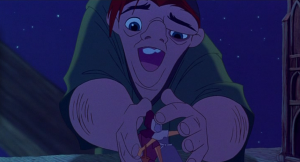 words to pretty much every song. Just admit it.

5.) The Hunchback of Notre Dame – I’m going with one of my favorite lines here: this movie feels like it was made on a bet. Whose bright idea in Disney animation was it to attempt a family-friendly animated feature based on Victor Hugo’s grotesque tragedy? It’s like if Disney, one hundred years from now, decides to do an animated family musical version of A Game of Thrones. Just a bad idea all around, based on the assumed audience. On its own merits, though, Hunchback is an alarmingly good musical with a dangerously beautiful score, lush and full-bodied, as epic and treacherous as one has any right expecting in a Disney cartoon. The songs are by Disney vet Alan Menken (also represented on this list by Beauty & the Beast and Little Shop of Horrors) and Broadway stalwart Stephen Schwartz, he of Wicked and Godspell fame. The film earned itself a PG rating and, much like the equally dark non-musical The Black Cauldron, is one of the Disney animated features that it’s perhaps wise to keep from the very young. Anyone older, though, should make it a point to include Hunchback in whatever streaming queue they keep… and then actually watch it.

4.) South Park: Bigger, Longer, & Uncut – Matt Stone and Trey Parker really do love musicals, don’t they? The South Park movie came on the heels of the show’s lackluster second season, right when it seemed South Park might end up being just another paper tiger threat to The Simpsons’ long-held grown-up animation crown. Then Bigger, Longer, & Uncut was unleashed upon the world with howling satirical glee (and spot-on parodies of VERY specific Broadway song styles) and the four boys from Colorado have not since looked back, securing their place as the premier purveyors of modern-day American satire. Whether you prefer the Canadian insanity of “Uncle F*cka”, the Disney-lampooning “Quiet Mountain Town” opening, or the anthemic “What Would Brian Boitano Do?”, the South Park movie has something for everyone… provided everyone is cool with Saddam Hussein and Satan’s super- 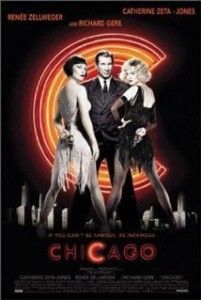 3.) Moulin Rouge! – Baz Luhrman has stupid-obvious filmmaking fingerprints. When you’re watching a Baz Luhrman film, you KNOW you’re watching a Baz Luhrman film, and of all the Baz Luhrman films in the world, Moulin Rouge! is the Baz Lurmaniest. I love Moulin Rogue!, dragging third act and all. (The Sound of Music suffers the same problem. Let’s get real.) Now, look: I know it says something about my tastes in music when I don’t realize until well after the fact that almost all of Moulin Rouge!’s music is unoriginal. (I had never heard “Your Song” until Ewan MacGregor’s poet sings it to Nicole Kidman’s courtesan. True story.) It is great pop music repurposed to tell a classic romance-tragedy tale, the old colliding with the new in one of the most dazzling displays of cinematography and showmanship you’ll ever see. I’ll assume that all of the rights issues surrounding the songs is the reason we’ve never gotten a Moulin Rouge! Broadway adaptation, but someone has to get on fixing that, pronto. What’s my favorite number? “Diamonds Are A Girl’s Best Friend”? “Roxanne”? “The Can-Can”? That honor will have to go to “Come What May”, which my wife and I danced to at our wedding. Awwwwww.

2.) Chicago – A musical film that improves upon its source material by leaps and bounds. The first musical to win Best Picture in over 30 years. The greatest score ever produced by the legendary composing team of John Kander and Fred Ebb. Impeccable casting (even Richard Gere, as it turned out). A so-simple-it’s-brilliant framing device for its musical numbers. First rate direction and choreography. Savvy and smart decision making about what songs to cut out from the Broadway score. And all that jazz.

1.) Les Miserables – The most popular and arguably the greatest musical of a generation was fittingly adapted into 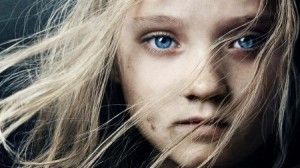 the greatest film musical of all time, capturing the epic scope of Victor Hugo’s classic decades-spanning tale of war, love, and redemption in a way even the original Broadway production did not. Much has been made of the decision by director Tom Hooper (The King’s Speech) to do something generally unheard of in the filming of musicals: he had the actors sing on-set. In most film musicals the songs are recorded first and then the film is shot with the actors lip-synching to their own pre-recorded voices. Les Miserables was shot with an on-set piano being fed into the actors’ ears via earpieces and the cast singing in the moment, which accounts for the raw ferocity of the performances given by Hugh Jackman and company: they were actually able to ACT, instead of being stuck doing every song in every take exactly as it had been recorded months earlier. (One would hope that this becomes the trend in film musicals, and not the exception.) Also, the Les Miserables screenplay, much like Chicago’s, is a study in artful conciseness, editing out much of the fat in the stage show’s third act and distilling the story down to its bare essentials, sacrificing none of its emotional heft in the process. Last point: Anne Hathaway’s rendition of “I Dreamed A Dream” is the best ever recorded, and frankly the only one I can stand. She also played Catwoman. Geek cred.

Tom Hoefner (@TomHoefner on Twitter) is a playwright, theatre director, college professor, and would-be novelist living in Brooklyn with his wife and daughter. Seriously: the Rent movie is really bad. But it’s not as bad as The Phantom of the Opera’s filmed adaptation. And the low point of Joel Schumacher’s career was bat-nipples. Woof.

0.) The Nightmare Before Christmas – This doesn’t belong on anyone’s “Greatest Movie Musicals” list. But I love it, and so do you. Also, Jack Skellington’s dog is name Zero. So here it is: #0.