One of the most interesting things in the 29-year old history of the Teenage Mutant Ninja Turtles is, that in what is still a relatively short lifespan for a major pop culture comic property, the franchise has gone through enough personalities to make Sybil look like a poseur. The original Mirage Studios comic was a black-and-white, ultra-violent parody piece, a chopsocky pastiche of B-movie sci-fi and kung-fu. The officially licensed cartoon series that followed, the one that turned TMNT from just another cheeky indy comic with a 10-issue run to a worldwide cultural phenomenon, was a goofy kid’s show full of silly catchphrases and non-violent, non-offensive action. The ultra-popular Playmates toy line combined the grimace-faced personas of the Mirage comic, the vibrant colors of the cartoon series, and the gross-out aesthetic of the Garbage Pail Kids era. The live-action film unspooled with a distinctly light fantasy/Jim Henson/Dark Crystal feel, the two TMNT video games of note (the first arcade cabinet and its Turtles in Time follow-up) were side-scrolling Double Dragon style brawlers, and the Fox Kids Teenage Mutant Ninja Turtles series of a few years back delivered a pumped-up superhero show in the vein of Fox’s popular X-Men and Spider-Man animated series. (There were other TMNT incarnations over those 29 years or so; none are 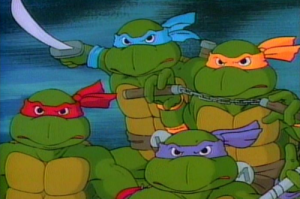 much worth mentioning here.)

Now, as the Turtles approach 30, what is possibly their strongest incarnation to date has emerged. In 2009 Viacom bought out the Teenage Mutant Ninja Turtles franchise in its entirety from series co-creator Peter Laird for a cool $60 million. The primary reason for this, presumably, was so Paramount Pictures could produce an already-delayed and likely-to-be-awful Michael Bay directed TMNT live-action motion picture. We’ll take a “wait-and-see” approach on that calamity-in-the-making, but for now we’ve got what amounts to a pleasant side project up and running: the brand new Teenage Mutant Ninja Turtles animated series by (and on) Nickelodeon.

Ah, yes: Nickelodeon. Home to such fare as Dora the Explorer, Are You Afraid Of The Dark?, and the pure genius of Spongebob Squarepants. I almost dismissed their new computer animated TMNT. Fortunately, I have a six-year old who lives all things Nick: Spongebob, Fairly Odd-Parents, Victorious, Full House reruns (it was a better show than you remember). So it was that, at an upstate hotel several months back, the morning of my brother-in-law’s wedding, with the 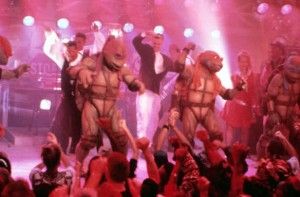 TV tuned to Nick so my wife and I could get ready without having to pay attention to our daughter, I was scolded on multiple occasions for slowing down with the formal dressing process as I stared at the television. Ninja Turtles had come on, and as I stood there with shirt tails out and tie untied I realized that, holy crap, this show was pretty good.

TMNT has a lot of things going for it: an all-star voice cast features Jason Biggs as Leonardo, Sean Astin as Raphael, well-known cartoon voicer Greg Cipes as Michaelangelo, and, in its most inspired casting turn, Rob Paulsen (the voice legend behind Yakko Warner and Raphael on the original TMNT series) as Donatello. The series writers have done their job and their homework: this is an all-new Turtles tale, steeped in TMNT lore that reflects both the classic cartoon and the original comic (Mikey hums the old-school TMNT theme as he slaps on his tPod before a fight; April’s cell phone rings and the caller ID reads ‘Irma’; when the Turtles enter battle their pupils vanish and they take on the white-eyed grimaces of the old black-and-white book). The one-liners are for-real funny and the characters, from a Splinter who is the complete opposite of the old and 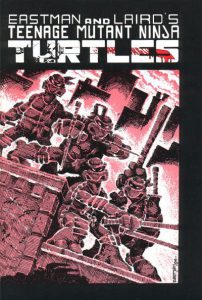 decrepit rat he’s normally portrayed as, to an obsessed and legit frightening Shredder, are all fleshed out and given new spins on old designs. The animation, particularly the combat, is fluid and smooth and lovely to watch (here the solid-but-unspectacular 2007 CGI TMNT film comes to mind), and shows a definite anime influence that may take some getting used to for older audiences.

The one single change, though, that makes this new TMNT stand out head-and-shoulders above all of its various incarnations, is this: the creative team here remembered that there are four words, not three, in the franchise title. Everyone always remembers the “mutant”, the “ninja”, and the “turtles”. The Nick team has remembered: these guys are also “teenage”. For the first time that I can recall, Leo, Mikey, Raph, and Donnie (the nicknames get more airplay than their full monikers) are actually portrayed as teenagers, and their visual appearances are designed as such. Gone are the over-pumped steroid physiques usually slapped on the amphibious quartet. The Turtles here are lanky, a little awkward and a little goofy, and actually sport character designs that A.) aren’t different-shaded clones, and B.) resemble something anthropomorphic turtles might actually look like. The “teenage” aspect of the group plays a big part in the series’ pilot episode: on their fifteenth mutation-day, Splinter allows his sons to visit the surface world for the first time, prompting their initial encounters with, among other things, pizza, the alien Kraang, and April O’Neil.

Important to note: April, too, is fifteen, which is a very wise move. The twenty-something year old April of past TMNT incarnations hanging out with a bunch of teenaged guys is kind of creepy when you think about it, and making the team’s 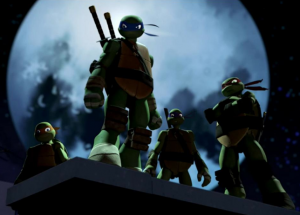 one human ally so obviously young goes a long way towards reminding us that the Turtles, too, are young. The April/Turtles relationship makes more sense now, and so does Donnie’s schoolboy crush on April, Mikey’s goofball-but-not-cartoonish personality, and the standard Leo/Raph rivalry, which when waged by teenagers feels more like competitiveness between siblings and less like a blood feud.

Like any child of the nineties, I grew up on TMNT, which was always a great idea with less-than-perfect execution. This new Nick series may not be perfect, and may not be everyone’s cup of tea (it certainly isn’t the darkly violent original band of Turtles), but it is, I think, the ideal mutation for what this franchise has become over the years: an all-ages animated series with crackerjack fighting, sci-fi and kung fu trappings, and genuine humor, focused on every aspect of what makes the Teenage Mutant Ninja Turtles exactly what they are supposed to be.

Also, the theme song is bitchin’.

Advance Review – Infestation 2: TMNT #1 As a kid I loved Teenage Mutant Ninja Turtles. My mom tells a story that all she had to do…

Review: Infestation 2 – TMNT #2 So if you read the review of the first issue of this series, you know I enjoyed it immensely. If…

Geek Cinema: Top-Ten All Time Pieces of Superhero Music If the clothes make the man, then the music makes the hero. I’m a collector of film scores; love ‘em,…