If you haven’t seen The Amazing Spider-Man 2 yet, and somehow still haven’t figured out how that movie ends… this article is not for you. Sorry.

I recently read an article elsewhere on the interwebs that asked, “Why do comic book movies have to follow their source material so closely?” Initially, I was a bit offended. My brain started Hulking out into fangirl mode. “Because that’s how you end up with crap like X-Men: The Last Stand!” (I’m a Phoenix fan – I took that one a bit personally.)  The article then went on to say that it was a shame to have to kill off great characters in the movies, just because they died in the comics. And it literally made me pause mid-paragraph.

What if we treated the comic book movie-verse like a Marvel “What If?” story? What if Gwen Stacy didn’t have to die?  I’m not proposing anything too radical – Peter Parker’s parents are still out of the picture, Uncle Ben still dies after giving him some version of the “Great Power” speech… Peter Parker is still the same old friendly-neighborhood Spider-Man that we know and love. Why can’t he have a smart and sexy girlfriend who knows his secret, and is ok with it? He’s already haunted by the death of Gwen’s father – Pete’s painfully aware how close to home some of these villains can strike. I’m not even saying that Peter and Gwen necessarily live happily ever after. Maybe she starts focusing on her career and they drift apart. Maybe some red-head wannabe-actress moves in next door and starts causing problems. What if Gwen married one of her scientist buddies, and they were the science “power couple” of that particular universe (since Reed Richards and Sue Storm are still over at Fox)? Pete would inevitably be hurt, but 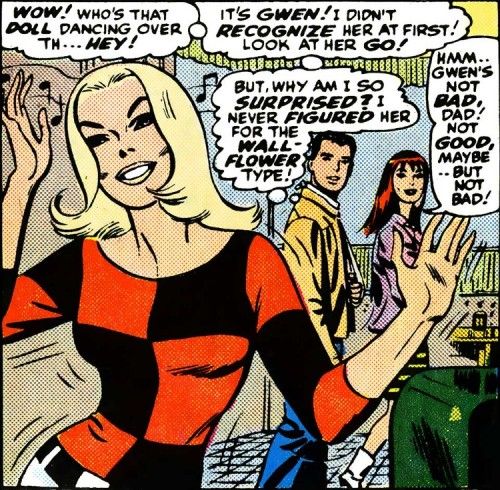 understanding, and eventually they could have a functioning friendship again… and Pete could finally work up the nerve to ask his neighbor why she always calls him Tiger. There are countless ways to keep Spidey essentially the same character –  I’m just saying that the “SNAP” in the comic book doesn’t have to translate to the “THUD” we heard in the movie.

Obviously, this concept isn’t related to Gwen Stacy exclusively. It’s quite the opposite – there are endless possibilities.  What if Lois Lane “just wasn’t that into” Superman, and didn’t keep him based in Metropolis? They remain friends, she occasionally sends him news leads on bad guys that need to be dealt with, but he gets to help out humanity on more of a global scale. Literally a world full of story-telling possibilities. What if Tony Stark and Bruce Banner really started working together past their post-credits movie scene? All kinds of crazy think tank inventions and technology abound, they start matching wits against the abundance of mad scientists in the Marvel Universe. What if… What if we didn’t try to cram 10 villains into every movie, and just focused on one, or maybe two tops? (Ok, that last one doesn’t fit in with what I’m talking about at all – just had to vent.)

Yes, I know there would be rumblings and riots and much internet bashing from the nerd community.  But we live in a world where comic books contradict themselves on a regular basis.  Joe Quesada can ret-con any crazy development he wants into the official Marvel continuity (*cough* MEPHISTO *cough).  If the characters stay true to their core traits/beliefs/origins, is it truly terrible to change up some of the other details of their lives? Comic books have obtained an Eternal Sunshine of the Spotless Mind -esque amnesia.  The characters memories are erased, stories are rebooted, and yet, Peter Parker is still Spider-Man, and inevitably finds his way to Mary Jane. Bruce Wayne is still Batman, and uses his wealth to fight off the villains that plague Gotham City. Superman still fights for a world that he has adopted as his own. Tony Stark is still Iron Man – and we love him for it.