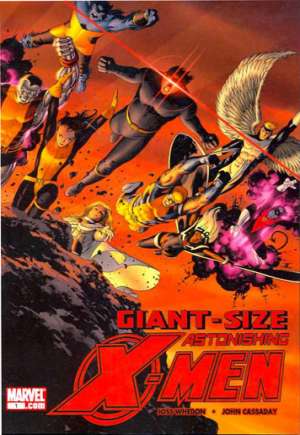 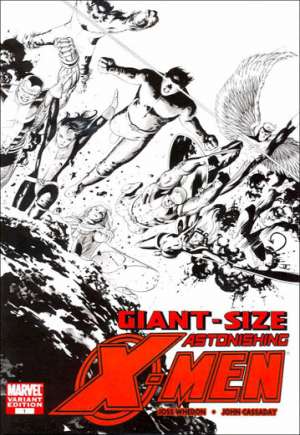 Finishing off what was supposed to be two years and four story arcs, Whedon and Cassady go out with a bang in this special giant-size issue capping off their acclaimed run on Astonishing X-Men. It ended up taking four years and an extra triple-sized issue, but it was well worth it.

Beginning where “Unstoppable” left off (Astonishing X-Men #19-24), this issue starts on Earth with Spider-Man enjoying a leisurely swing through NYC. He is interrupted by a BAMF in his face, then an ice slide, then a gust of wind… the X-Men need his help. Assembled in space on the giant ship made of the Sentinel that destroyed Genosha, the X-Men, Fantastic Four and various Mighty and New Avengers have come to the mutants’ aid.

Cutting away to the Breakworld, Kitty is still stuck inside the giant bullet that has been fired at Earth, while Colossus attempts to deal with Aghanne, who it turns out orchestrated this false prophecy about Colossus to server her own goals. She is tired of her race constantly being at war and the only option she saw was to destroy it. Colossus is the only one who could accomplish this. Elsewhere, Agent Brand displays some unique abilities… Armor realizes no one has told Peter about Kitty… Doctor Strange is rendered unconscious due to magical protection… Mr. Fantastic hatches a plan to trap the bullet in the negative zone… and finally Agent Brand unveils her love to Beast!

Back with Colossus, he realizes what he must do and receives some timely assistance from Ord who pops off Aghanne’s helmet, setting them both ablaze from the heat of the core which only Colossus can withstand. Colossus holds Ord until he disintegrates from the heat. Meanwhile, Reed sets his plan into motion with the help of the FF. Surprisingly, it goes off without a hitch. But all of a sudden everyone on the ship is standing completely still, drooling… while the bullet continues through space, unhindered. Kitty and Emma talk while different heroes envision themselves stopping the bullet. Spider-Man snaps out of it, hitting Storm to wake her up.

Again with Colossus, he confronts the Powerlord Kruun of the Breakworld. With a little help from Wolverine, he takes the Powerlord’s arm (literally), a sign of his rule over the world. Kruun tells them the bullet may have one structural weakness (Deathstar, anyone?) and by ramming it head-on they may be able to divert it. A giant Sentinel sounds like a good idea, but it shatters with no effect. Emma continues to talk to Kitty, revealing that she is proud of Kitty for what she knows she is about to do. As the bullet rockets to Earth, Kitty prays for strength… then phases the thing straight through the entire Earth where it continues to hurtle through space on the opposite side! The other heroes can do nothing but watch in amazement.

Back on Earth, Cyclops has to break the news to Peter that the “top men” can not find a way to help Kitty, though they won’t stop trying. Emma breaks into tears while Wolverine and Armor go into a rather violent training session and Peter just stands on the mansion’s lawn looking into space. To avert losing control of his new-found visor-less powers, Colossus once again dons the head-piece. Agent Brand and Beast talk about what she said to him in space. She reveals her father was also blue and furry, which explains both the attraction and the powers she displayed earlier. She offers his a job (with benifits!).

All the while, Kitty continues to hurtle through space, bonded to a giant bullet…

Now, Whedon gave Colossus back to the world and that was amazing… but how can you take Kitty away? Granted, it was done with style and whole can of emotion, but that’s just cruel. I imagine he (or someone else) will have a story in a few years where some telepath will suddenly pick up her frequency and there will be a big to-do about trying to save her, but for now we’ll have to live without her. I didn’t get the whole “drooling” part and they never explained what caused it unless I just missed something. Other than that, the issue was perfect.

This whole run has been nothing short of amazing. I remember reading many of this issues twice back-to-back because I enjoyed them so much, which is rare. It didn’t seem like many of the things going on were going to stay in continuity or have a lasting effect on the Marvel Univserse, but after this I can tell it really came around and a lot of this stuff is going to stick.

I’m interested to see what Warren Ellis can do with this series. He did wonders for Iron Man (even though that was only one arc) and his Thunderbolts stuff has been great. Definitely looking forward to being Astonished!

Back Issue Bin to the Future: Uncanny X-Men #141 Days of Future Past is arguably one of the most popular storylines in comics, let alone in the X-titles. So…

Stash or Trash? Truth told, I'm not much of a “stasher”. I never bagged and boarded and hoarded because of the perceived monetary…