I don’t watch a lot of original run television programming.

I direct college theatre, and usually when new TV seasons start in September and January I’m in rehearsal at nights. Can’t commit to watching a new show on its regularly scheduled evening of programming as I never know if I’ll be home for it. My wife and I don’t own a DVR because if we did… I’ve got a bit of an OCD thing with stories. If all the episodes of a particular show were on the DVR I don’t have, I’d be psychologically forced to watch them all, in order, and get nothing, nothing, nothing done. (I also prefer self-contained stories instead of long-form episodic stories that don’t ever seem to end, which is why I prefer movies and novels over television and weekly comics and is one of the reasons I stopped reading weekly comics… but that’s not what this article’s about.)

So I catch a lot of the big TV shows years after the fact, on DVD (Firefly) or on Netflix (Arrested Development) or in syndication. I’ve been on-and-off sick for the past couple of weeks and have had some downtime, and that’s coincided with my discovery of my recently-syndicated-on-TV-non-stop-favorite-new-show: The Big Bang Theory.

You can’t turn on TBS these days without seeing the adventures of uber-nerds Leonard and Sheldon and their attractive-across-the-hall neighbor Penny, and as I’ve sat here watching episode after episode I’ve wondered to myself, “How have I missed this show up ’til now?” I took to Facebook to share this opinion with my 600 close and personal friends and something… peculiar… happened. As one may imagine, I have many friends of the fanboy-ish persuasion. And a few expressed their dismay over my newly professed love for TBBT, primarily on the grounds that it “mocked” geeks, that it helped to perpetuate negative stereotypes about nerds and comic book fans and the like. And you know what? It’s an argument I’ve heard before. And it’s one I don’t really understand. 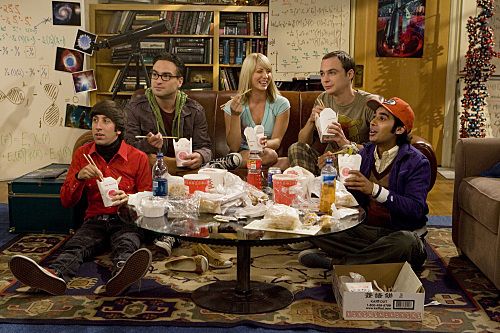 Look, one of the reasons I dig TBBT is BECAUSE of all the hugely fanboy-centric references… AND the fact that they get those fanboy-centric references RIGHT. It’s awfully uncomfortable when a show or movie or book tries to shoehorn stuff like that in and doesn’t quite nail it correctly, like the creators are trying to win over the geek viewers with comic book references when they don’t really know what they’re talking about. The writers on TBBT clearly know their comics… and movies, and sci-fi television, and cartoons, and anime, and… you get the point. There is nary a misstep in the portrayal of the protagonists fan-ism, and as a fan-ish type person myself, I appreciate that. I’m not offended by it.

I mean, what’s to be offended by? It’s a comedy. It’s funny. Besides, the guys on this show aren’t exactly portrayed as basement-dwelling mouth-breathers. These are Hollywood nerds, with witty one-liners and good jobs and nice apartments (well, except for Wolowitz) and hot girlfriends. Honestly, I think the boys of The Big Bang Theory paint our people in a pretty GOOD light.

TBBT isn’t the only show getting my geek-peeps all kerfuffled, though. Just a few days ago, flitting across my Twitter feed (@TomHoefner, for all of you out there who might be interested in a #FF!) came a string of fanboy-vehemence against Comic Book Men, the new AMC reality series shot in Kevin Smith’s New Jersey comic shop, Jay & Silent Bob’s Secret Stash. Words like “insulting” and “cliched” and “mockery” were used to describe the outrage, OUTRAGE, felt by the many comics-types I follow upon their viewing of the show. 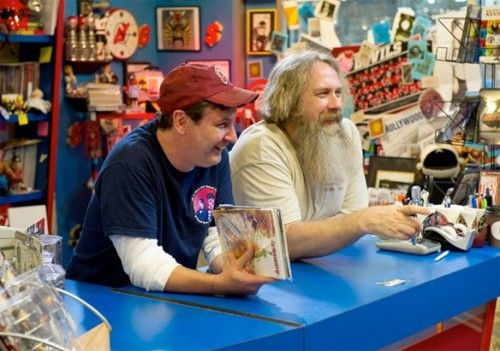 I wasn’t outraged by Comic Book Men. I was just kinda bored by it. It was like that pawn shop show, Pawn Stars, except instead of pricing antique rifles and championship rings, the Friends of Kevin were pricing old Six Million Dollar Man action figures. The only remotely engaging parts of the show, I thought, were in the roundtable/podcast discussions hosted by Kevin Smith who, no matter what you think of his films, is undoubtedly a hell of a storyteller and is a super-engaging speaker (although these days it’s so easy to hear Kevin Smith talk if you want to there’s almost nothing special about hearing him opine on things anymore.)

Comic book fans like you and I need to explore ourselves as a fan-type, I think. We get mad if we’re ignored, we get mad if we’re made fun of, and we get mad if those we view as “outsiders” try to act like one of us. It could be that every fanbase of everything acts this way, defensive and seclusive and all circle-the-wagons. But we should probably all lighten up a bit about ourselves when it comes to stuff we’re fans of, stuff that, when it comes down to it, doesn’t actually impact our lives in any real way, shape, or form. I mean, look: if I’m not able to laugh at my own borderline unhealthy obsession with Star Wars and Spider-Man, then that should be my first sign I’m taking myself just a taaaad too seriously.

BUT… I swear on all that’s good and holy: if you say ONE BAD THING about Harry Potter, I will Avada Kedavara your ass back to the stone age. Bazinga.

When he is not contributing to StashMyComics.com/blog Tom Hoefner writes other things that are excellent. Check out the “Race McCloud” KICKSTARTER campaign! Enjoy the new video short, and DONATE to help Race & Cookie get back to the NY Stage! … and be sure to click HERE for free short stories chronicling the further adventures of Race and Cookie McCloud!

Review: Comic Book Men If you haven't been following us on Twitter, then you missed the awesomeness that was the live tweets during the…

Geek Cinema: Totally Lost This is going to be a kind-of-but-not-totally-spoiler-filled semi-review of Lost. Why just a semi-review? Because I'm only done with five…

Geek Cinema: WHO ARE YOU!? I’m Bat­fleck. It came out Friday night (or at least hit my Twitter feed Friday night, via Kevin Smith) that…

Geek Cinema: Confessions of a Terrible Critic I’m a terrible critic. No, it’s true. I am. I’m not just referring to my complete lack of urgency to…