Aug 8, 2014 by Mel Lang    Comments Off on Hooked on a Feeling (AKA Geek Cinema: Guardians of the Galaxy)    Posted In: Geek Cinema, Reviews

“Ooga chaka! Ooga chaka!”  I remember when I saw the first trailer for Guardians of the Galaxy.  And, like most folks in the geek community, my level of excitement immediately sky-rocketed.  (No pun intended.)  Marvel Studios’ track record had been stellar, but I was still hanging onto a few reservations about their take on GOTG until then.  In my opinion, it’s a lot easier to make a movie relatable when it’s 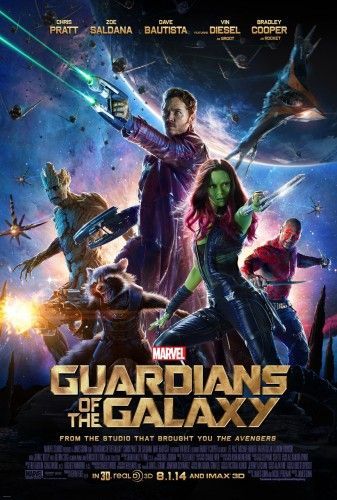 rooted on Earth, in places we know to exist and may have even visited.  It makes it one step easier to suspend disbelief when it comes to aliens, superpowers, and costumed heroes running amuck.  However, when the setting changes to outer space, there is an immediate need for an extra level of CGI and special effects, sometimes taking that “reality” away from the movie.  (DC’s Green Lantern movie had a few issues, to say the least, but I did enjoy the non-space segments more than their galactic counterparts.  Don’t worry, Ryan Reynolds – I still love you, and am holding out hope for a REAL Deadpool movie.)  Marvel Studios excelled at making GOTG all about the characters.  The spaceships and alien worlds just happened to be along for the ride.

I cannot imagine this movie with anyone other than Chris Pratt as Peter Quill.  (You may know him by his other name: Star-Lord.)  He gave the movie its heart, and made me smile nearly every time he was on screen.  Gamora (Zoe Saldana) and Drax (Dave Bautista) were strong supporting characters, but were often outshone by their CGI comrades, Rocket and Groot.  In probably the most endearing role of his life, Vin Diesel lends his voice to Groot, probably the most bad-ass tree you’ll ever meet.  Bradley Cooper’s Rocket is the Han to Groot’s Chewie – the pair are inseparable and dear friends.  Rocket stands toe to toe (even if he’s not tall enough to see eye to eye) with Star-Lord in delivery of wise-cracks and one-liners, and proves to share the violent yet lovable roots of his comic book counterpart, Rocket Raccoon.  Comic book fans will see notable appearances by Ronan, Thanos, The Collector, and the Nova Corps, to name a few.  (And of course, the post-credits surprise is worth the wait, as always.)  I saw the movie in 3-D, because that was the showing time that worked best for my schedule.  As with most of the other comic book flicks, I think the 3-D was unnecessary, and didn’t really add that much to the movie.  That being said, it’s most definitely worth seeing on the big screen.  (And still worth it on the big screen for multiple viewings, I’m told!)

Needless to say, Guardians of the Galaxy has proven itself as a worthy addition to the Marvel Cinematic Universe.  Now comes the long wait until next year’s Avengers: The Age of Ultron.  I’m anxious to see the next pieces of the puzzle fall into place, and ultimately the cosmic battle they’re building to.  For now, I will have to be content jamming to my own Awesome Mix, and pondering the heroism of such great earthlings as Star-Lord and Kevin Bacon.