San Diego, CA (March 19, 2012) – At WonderCon, IDW Publishing announced the launch of an all-new, ongoing Womanthology comic book series, inspired from Womanthology: Heroic, the hit anthology graphic novel created from an idea by artist Renae De Liz (The Last Unicorn) that went on to be one of Kickstarters most funded comics projects. The new ongoing series, Womanthology: Space! will debut with its first issue in September 2012.

“Womanthology: Heroic was such a big, wonderful experience, and not in my wildest dreams could I have hoped that it would go on to further adventures! I hope that Womanthology: Space! is just the start of a long line of amazing books that further open doors for women in comics everywhere. I hope this will be a continued outlet to have their work showcased and appreciated, and help many take that next big step towards a career in comics,” said project manager, De Liz. “Again there will be all ages and experience levels accepted. This has always been so important to me, as I know first hand how even one show of support can offer so much confidence and motivation in your work. This not only helps aspiring creators gain valuable experiences and a platform to help further careers, but it also allows established professionals to reach out and lend their comics knowledge and know how. I am so glad that the positivity and fun of Womanthology is going further, this time into Space!” 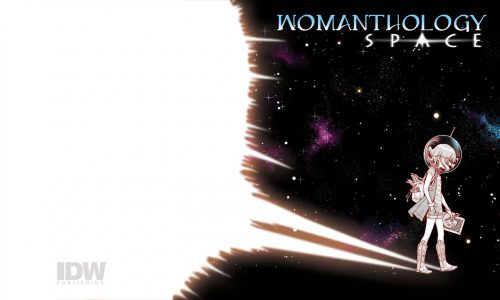 Produced entirely by women, and showcasing the works of over 140 creators of all ages and experience levels, Womanthology: Heroic became a unique experience for unknown creators to work with established professionals and to show the wide variety of work by women in comics. Womanthology: Space! will continue that path and feature work by well-known creators and newcomers, such as Blair Butler, Fiona Staples, Jessica Hickman, Bonnie Burton, Ming Doyle, Stacie Ponder and many more. Each issue will present three stories, focusing on the theme of the series, “Space”, where creators will use the concept and a sub-theme to inform and inspire their individual story. In addition, the series will also include pinups and ongoing mini-comics by different artists, as well as tips from professionals.

“We’re extremely excited about the ongoing and continuing to showcase the talented and inspiring work by women in the industry at all levels. Whether they’re just starting out or seasoned veterans, these creators all have something to say with their stories and being able to offer them this opportunity just shows that a little idea can make a huge difference,” said editor Mariah Huehner. “Heroic was such an incredible experience and Renae is, without exaggerating, an incredible person and artist who deserves a huge round of applause for making a real difference. We knew Heroic wasn’t the end, so join us in Space!.”

Kickstarter Spotlight of the Week With the coming of fall, stashmycomics.com/blog will have a few new regular features. one of which is this one. The…

Interview with 2012 Eisner Nominee Jeremy Whitley The 2012 nominees for the Eisner Awards have been announced, and Jeremy Whitley's Princeless has garnered two well deserved nods for…