Currently running on Kickstarter, Wolf and Man is a webcomic by Jordan Kroeger that’s being collected in print for the first time. With rewards ranging from PDFs with never-before-seen content to print copies, original art and even cute little wolf buddies, the Kickstarter has plenty to choose from. With the campaign nearing it’s mid-point, Jordan was kind enough to talk about making a silent comic, why he chose Kickstarter, and more.

Leo Johnson: To start with, what’s Wolf and Man all about? 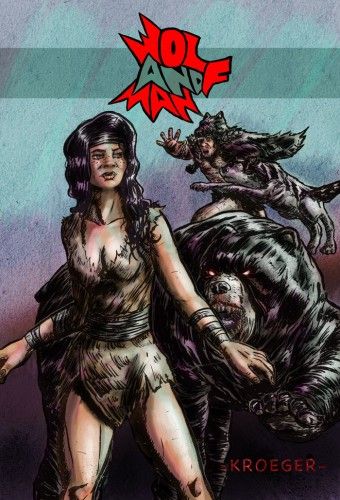 Jordan Kroeger: Wolf and Man is the story of a man who looses everything, and is willing to fight to get it back. Along the way he makes a friend, in the form of a wolf. He then must become more animal than man if he wants to survive.

LJ: Where did the idea for Wolf and Man originally come from?

JK: I have this weird obsession with dogs, and the relationship we’ve formed with them over thousands of years. I had an idea to do this series of short stories about people and dogs, each one set in different time periods. This was to be the first one, but I guess I got carried away with the story, and it turned into this longer thing. I like the way it turned out, though.

LJ: Wolf and Man features absolutely no dialogue, if I recall correctly. What was the thinking behind the choice of doing a silent webcomic?

JK: Well, it seemed to fit with idea of the story. It’s supposed to be a pretty basic story, with classic themes – the hero adventuring off to get the girl. And since the majority of the story is Man and Wolf together, it made sense to me. It was also an experiment to see if I could drive a story purely with my art. I think I did ok!

LJ: Now, you’re turning to Kickstarter to get a print version of Wolf and Man made. What made Kickstarter the “right” choice, vs. other crowdfunding sites or even self publishing?

JK: I’m always seeing other people’s comic projects on Kickstarter, and I’ve donated to a few myself. I’ve honestly never even looked at those other sites before. I like the community aspect to Kickstarter. I think it’s a good promotional tool to get people behind my work, and get my name out there.

LJ: In addition to collecting the webcomic run of Wolf and Man, the Kickstarter will also hopefully get some extra content out to readers. What made you decide to extend the story with a special “Kickstarter Only” part?

JK: I thought it would be a cool treat for anybody that’s enjoyed the webcomic, and would like to see more. Plus, I always enjoy when I buy big collected-edition book and it has those extra bits in it. Besides the Epilouge story, there should be some other cool bonus material to look out for.

LJ: Finally, is there anything else you’d like to add?

JK: Sure! I just want to say that I really appreciate the whole online comic community, specifically Twitter. Without them, I would never really be getting any feedback on my art. I’ve gotten a lot of support. Thanks so much to anyone who’s been following me! I’ll have a lot more cool stuff to show you soon!

Be sure to check out the Wolf and Man Kickstarter page before it’s too late!

Crowd Funding Flash: Wolf and Man Wrapping up its webcomic run, Wolf and Man now turns to Kickstarter so creator Jordan Kroeger can print a collected volume of the…

Kickstarter Spotlight: The Pantheon Project With the explosion of Kickstarter projects amongst the comic book community, I have developed an immense curiosity about what is out…

Teen Wolf Review: Raving In this episode of Teen Wolf, Scott and Derek’s packs work together to try and trap the kanima (aka Jackson).…