The news hit last week that Chew was finally going to be adapted to to a show, this time as an animated show rather than live-action. Steven Yeun and Felicia Day have been tapped to voice series protagonist Tony Chu and his girlfriend Amelia Mintz, respectively. Recording has already begun and it seem like this adaptation will finally make Chew into more than just a comic. Chew artist and co-creator Rob Guillory was kind enough to talk about the format of the feature and how it all came to be, while still keeping future announcements hush-hush.

Leo Johnson: Chew is finally coming to television, as an animated show. How awesome is that for you, as a creator, to see one of your creations adapted into another medium?

Rob Guillory It’s pretty exciting. And after numerous disappointments at adapting CHEW for TV over the last few years, it’s starting to feel real. So Layman and I are feeling uncharacteristically optimistic, which is a little weird. We’re most excited about being hands-on and making sure it’s done the right way. The original creators are driving the boat, which is rare.

LJ: Steven Yeun and Felicia Day are voicing Tony Chu and Amelia Mintz, respectively. Both are professed fans of the book, so how cool is it to have people who enjoy the work 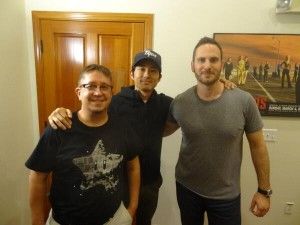 to be involved with taking it to another level? How were they brought into the roles?

RG: Yeah, to get such great talents is fantastic, and even more so when they’re fans of the original source material. They know the world of CHEW front and back, and I think that level of excitement and love of the characters will show in their voice acting. Both Felicia (pictured below) and Steven (pictured right) were brought in by Jeff Krelitz, who is executive producer on the project and all-around “Good guy to know”. None of this could’ve been possible without Jeff doing the legwork.

LJ: What with the show being animated, is there going to be an attempt to match your style from the book, or will the show look a bit different visually?

RG: We’re trying to match my style as much as possible. I expect there to be some level of adaptation, and I’m good with that to an extent, but we’re aiming to stay close to my art.

LJ: The comic can be a bit adult, dealing with cannibals, cussing, and some interesting situations. Can we expect the show to keep the same vibe or make things a little tamer? 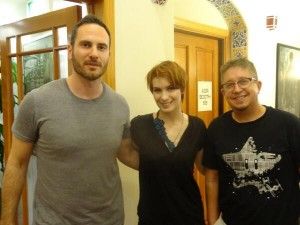 RG: It’s a direct adaptation of the first trade paperback. Literally. From what I understand, when Steven and Felicia recorded their parts, Steven actually preferred to read his lines from the actual comic. You can’t get any more direct than that.

LJ: How can fans expect to enjoy the show? In half hour chunks, something longer or shorter? On a known network or a different means entirely?

RG: We’re aiming for a 90 minute animated feature to start. And of course, if we’re happy with it and if the opportunity is there, we’ll aim to adapt the whole series. Looks like it’ll be available digitally and on DVD, but we’re still working out the details. We’ll be making those announcements later.

LJ: Finally, is there anything else you can reveal that hasn’t been covered already?

RG: Not terribly much, since we’re staying hush-hush on most of the details for now. But I can say that we’ll be announcing other voice talents soon, and fans will be pleasantly surprised, I think.