The 2012 nominees for the Eisner Awards have been announced, and Jeremy Whitley’s Princeless has garnered two well deserved nods for Best Single Issue (Princeless #3), and Best Publication for Kids (8-12). Don’t let that last nomination scare all of you hardcore comic book lovers away from trying this series out! Princeless has a handful of Easter eggs planted for the seasoned comic book fan as well. This heartwarming tale with a good message crosses race, gender, and age lines and succeeds on every level, earning every bit of it’s two nominations! Want to know more? Well, check out this exclusive StashMyComics interview with the series creator, and tune in below for a special announcement brought to you by Jeremy Whitley himself!

SMC: To start, CONGRATS on the two recent Eisner nods for Princeless and thanks for taking time out for us at SMC!

JW: Glad to be here Chip! And thanks for the congratulations.

SMC: Were you surprised to find out you were nominated? How do you feel the comic book community has received Princeless since it’s original release? Has anything changed since getting nominated?

JW: It always sounds fake when I hear other people say it, but I was genuinely surprised to hear about the nominations. It was not long ago at all that this series was dead in the water for me, before Action Lab picked it up and hooked me up with some tremendous artists. Since then, it has (said completely without irony) been a fairy tale for me. The comics community overall has been extremely supportive and while the original pre-order numbers were less than phenomenal, the word has spread over time and the excitement around the upcoming trade has been unbelievable.

Since being nominated the only things that have changed so far are that I’m trying to figure out how to get to and pay for San Diego on short notice. I was all set to say, “Maybe next year, if the book gets some more steam behind it” and now I couldn’t miss it for the world. That and I spent a lot more time in a day answering emails.

SMC: I’ve read Princeless, and thoroughly enjoyed it! I must say its rare to find a good “all ages” book these days that isn’t just watered down 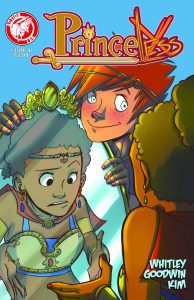 Marvel or DC characters. What was your intention in creating an all ages book?

JW: The intention for this book has always been to make something good, fun, and positive that I would be happy to share with my daughter. I wanted to make something that she could get into being both black and a girl, which is a group that’s hugely underrepresented in the current comics market. When she gets to the point that she’s old enough to read comics, I’d love to share that very important part of my life with her without her feeling like there is no one in the book she can identify with.

Beyond that, I’m just a little freaked out by the whole Princess culture that girls are exposed to. I don’t want my daughter to feel that she needs a man to rescue her or that she has only a few limited choices with what to do with her life. Adrienne is a girl who makes her own decisions and her own mistakes as well. It would be a better world if more girls felt more comfortable doing that.

SMC: Did you always plan for Princeless to be all ages?

SMC: Were there any specific inspirations behind the idea for Princeless?

JW: Lots of them. Specifically, the amazing women in my life. My wife and her amazing sisters (one of whom the character is named for), my mother and the two amazing ones I’ve gained from marriage, and the plethora of kick butt women I’ve been fortunate enough to have in my life to this point, including my daughter. 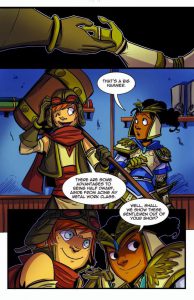 SMC: Princeless has a lot of hilarious references to some mainstream characters/books, my favorite being the armor fitting scene! Was this intended as a message for young girls?

JW: Absolutely. Young girls, older girls, comic book illustrators, whoever wants to take a lesson from it. I too have enjoyed my share of scantily clad women in my life, but sword fighting on a battlefield is not the place for one. A lot of creators believe that empowering and sexually empowering characters is the same thing and while there is a place for both, it’s difficult to think of four or five female superheroes that don’t dress ridiculously. If I do have young women reading my comics as I hope to, the last thing I want them to think is that they have to run around wearing a bra and panties to be important.

SMC: What’s next for Princeless and it’s characters? What other projects do you have in the works?

JW: Well, as far as Princeless goes, volume 2 is well in the works with our new amazing artist Emily C. Martin. If people want to keep up with the updates on that project they should check in at our tumblr site princelesscomic.tumblr.com. We’re posting new art, character concepts and sketchbook material there on a regular basis. This series should be available starting in the fall of this year.

In the mean time, we’re also putting together a collection of Princeless short stories, following the lives of many of our major characters. There will be four stories and they’ll feature all of your favorites including Adrienne, Bedelia, Devin, King and Queen Ashe, and even the long absent Prince Wilcome (who readers will remember from the first issue and backup story), as well as a few new faces.

As other projects go, I’m working on a lot of stuff. Folks should check out my webcomics at Firetowerstudios.com as which includes pages from the upcoming book I’ll have with Action Lab with illustrator Jason Strutz called “The Order of Dagonet“.

To be honest, I’m also hoping that the Eisner nominations will open up some doors to work on more projects. As much as I love making my own stuff, I’d also love to have a chance to work with some of the big boys out there. 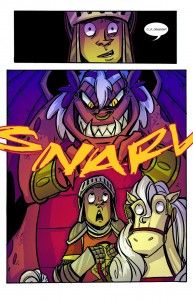 SMC: I think this series would make an amazing cartoon series/movie…it would kick all these lousy Saturday morning cartoons in the butt! Make it happen!!

JW: We have been in some talks with some folks, but nothing has come together officially yet. I am certainly open to the idea and would love to have a cartoon series. All we need is somebody with a tv station and a stack of cash that’s willing to let me do the lions share of the writing.

SMC: Do you have any advice for others trying to break into comic books?

JW: The first and biggest thing I tell people is to do it. Write, draw, go to conventions. I got as far as I am right now by hooking up with a couple artists who wanted it as badly as I did and continuing to produce work. Self publishing is expensive and it has a steep learning curve, but there’s no teacher like experience. Also, if you want to make comics, be sure you read comics. Get a lot of different kinds of comics. Read them. Study them. Even if you don’t like them all, make sure you understand what the creators are doing.

SMC: We’ve chatted about our mutual admiration for Hitchcock movies…have you found all of Hitch’s appearances in the ones you’ve seen? I’m thinking this concept could be applied to your comic books…a little “Where’s Waldo” of sorts.

JW: I believe I’ve spotted him in all of his that I’ve seen. I’m not opposed to putting in Easter eggs, but I try to keep them classier than just having people draw me into panels. Anyone who reads “The Order of Dagonet” is bound to see a thing or two they’ll recognize.

SMC: Speaking of Where’s Waldo, are there any cons your adoring fans might find you in the upcoming weeks?

Also, any cons that would like to invite me as long as I can make it and they don’t intersect with the ones I’m at, I will try to make them.
—–
A VERY special thank you to our guest for paying the StashMyComic’s community a visit! If you haven’t already, please go here to cast your votes for this year’s Eisner nominees. While you’re at it, consider voting for Jeremy’s Princeless series! The deadline for voting is June 4, 2012 and the winners will be announced on July 13, 2012.

As an added bonus, the wonderful Mr. Whitley himself is putting up two signed copies of Princeless #1 for our latest StashMyComic’s giveaway! To enter you only need to sign up for a FREE StashMyComic’s account, and then earn points by submitting comic data or rating and reviewing issues in your stash.  How easy is that?! Go here to get your tickets!

The Fangirl Concern: Preview Princeless Vol 2 #2 It's time to make sure you get your pre-orders in for March. That's especially true for smaller market publications. Lately…