It’s the Month of Valiant at StashMyComics and we have an extra special treat for all of our faithful followers! An exclusive interview with the multi-talented co-creator of the original Bloodshot series, Kevin VanHook! Kevin has not only had a successful career as a comic book writer and artist, he is also a movie director, special effects supervisor/producer, and screen-writer. This well-rounded creative talent has just about done it all, and is here to share some of his experiences with us!

SMC: How was the concept of Bloodshot created? Was it essential for him to be tied directly to Rai, from the future? Are you credited as the creator of Bloodshot or was it a joint effort? Who did the character design?

KV: Jim Shooter, who wrote the plot for Rai #0 had the original concept for an android/augmented man. I had been working closely with Jim–the plan was for me to write Solar or Eternal Warrior. After he left, Bob Layton scripted Rai #0 and he and I spoke a great deal about where the character would go. Don Perlin and I created the actual character we know as Bloodshot. I wrote the stories (and drew the origin issue) and Don drew the bulk of his adventures, we came up with the origin, the mob ties, etc. At one point, he was supposed to be programmed to fight terrorists, interestingly enough. There’s a holdover from that in the first issue. Howard Simpson did the sketch for the costume and Dave Chlystek came up with the name. Originally, ‘Coldblood’ was kicked around. I knew Marvel had a Doug Moench/Paul Gulacy character with that name.

SMC: Why Don Perlin for art? Was he able to give you the visual you were looking for in the Bloodshot series?

KV: Don was a staff artist and editor for Valiant and he had moved on from Solar. He was great. Solid storytelling and a complete pro. 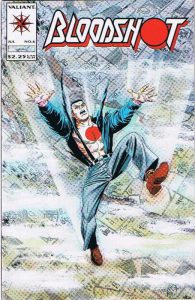 SMC: What was your reaction to the massive sellout of Bloodshot #1? Did that have any effect on how the rest of the series was written?

KV: I was ecstatic. It felt like some sort of validation for the work, but you have to take it with a grain of salt. We did a very good book that came out at the right time in the marketplace and our company was hot. I don’t believe it affected how I wrote the title.

SMC: Will you have any part in the direction of the movie that will be coming out from Sony? If so, can you give us any hints as to what it’ll be about? How pumped are you about this?

KV: That’s to be determined, but I doubt it. Very excited to see how it will go.

SMC: What are your thoughts on the new Valiant? Are you as excited as the rest of us? Will you be doing any comics at some point for Valiant?

KV: Hoping that they can build on the momentum they have so far and really create a viable publishing company. They’ve got great properties to work with. My involvement remains to be seen.

SMC: What are you working on right now?

KV: Primarily preparing my next film, ” Jason and the Necronauts” a Greek mythology/action adventure film starring Casper Van Dien and Ray Park. I also create a lot of visual effects for film and television. Currently, my team and I produce the Vfx for the TV series Rizzoli & Isles.

SMC: Do you have any comic book projects on the horizon?

KV: An adaptation of my film and I’ve talked to DC about something new, but there’s nothing concrete yet. 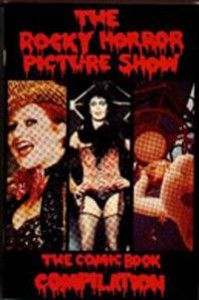 SMC: You are seriously multi-talented! What out of directing, writing, and drawing is your favorite? What did you aspire to do in the beginning? Have you reached your goals? What are you most proud of?

KV: Thank you. Directing films, or more accurately, the whole process (besides raising the money) of filmmaking is what I enjoy most. I started out just wanting to draw comics. I’ve reached most of my creative goals. I’d still like to do a run on Daredevil and the Fantastic Four (although I drew a Thing story when I was 22 for Marvel Comics Presents 21.) I’d like to direct a studio film and I’d enjoy creating a TV series.

SMC: What has been your favorite movie project?

KV: The Fallen Ones is the most pure fun and kind of an innocent film. Death Row is my most consistent in terms of directing, performance, photography, etc.

SMC: What inspirations (stories, artists, writers, etc.) did you have from the comic book medium before you started?

SMC: Are there any ongoing comics out there you’re reading right now?

SMC: My random discovery that you wrote/drew the Rocky Horror Picture Show comic book is what led to this interview. How difficult was it to translate a musical into comic form?

KV: It was a challenge. The movie wasn’t released on video yet. The studio sent me a bootleg copy they’d bought at a con and a copy of the screenplay! I bought every fan magazine and poster I could find. Ken Bruzenak was my first choice to letter it. I knew his style would make the lyrics part of the story.

SMC: I have to say, your pencils in that book were fantastic! From my research it doesn’t appear you’ve done a lot of art duties. Why is this?

KV: Economics. I simply make more money writing. I had a family to raise. For the last 15 years or so, (when I’ve not been making my own films), I storyboard for movies and TV and I create visual effects–specifically matte paintings. So, I do work more as an artist these days. Just not in comics. That said, Dan Didio and I have talked on and off about me writing and drawing something. 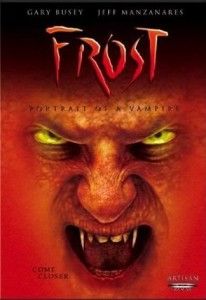 SMC: Do you have any crazy stories from your adventures in film making?

KV: Some that probably shouldn’t be told…but others that are fair game. Might not be crazy–

The Fallen Ones–Standing with Robert Wagner on top of the Sepulveda Dam while lighting was being set up and talking about how he got started in the business as a teenager. Waxing poetic about all the people on the freeways that we could see and wondering how many of them came here to chase their dreams. And how many would be going back home within a few months.

SLAYER– Shooting in a cave in Puerto Rico with 80,000 bats flying overhead for three nights–and the two people who said they were afraid of them were the two the bats decided to land on. Useful tip: Don’t leave the salsa and chips uncovered in a batcave.

SMC: What might people be surprised to know about you?

KV: I don’t know…maybe that I started off drawing comics instead of writing. I think my comic book fans don’t know I’m a film maker and vice versa. That I’ve created the bulk of the major visual effects for all of the Law and Order series since 2008. That I was a storyboard artist for The 13th Warrior. I was Vice President of Film Roman, where we animated The Simpsons and King of the Hill. I did voices for a Christmas cartoon.
—-
A BIG thank you to Mr. VanHook for taking time out for all of us at StashMyComics.com! We were super fortunate to gain an audience considering his busy schedule! Also, a special thanks to our resident Valiant geek, Tim Morse, for contributing questions and being an all around swell guy. If you are interested in seeing what Kevin is up to please visit his official website at kevinvanhook.com or follow along on Twitter @KevinVanHook.

Advance Review: Bloodshot #1 My anticipation for this issue was high when I initially heard Valiant would be relaunching Bloodshot. In the few months…