Dearest StashMyComics faithful, you are in for an exquisite treat. It’s possible (although hardly likely) that you have never heard of Sean Von Gorman. If this be true, I promise by the end of this interview you will never forget him! In the short time that I have gotten to know him, I’ve learned a great deal. Sean is a one man party. He is one of the most exuberant promoters of self published works that I have seen in recent history. The man will seriously do anything to sell his stuff, and like Houdini (who stars in his co-created series Secret Adventures of Houdini) he has done the impossible. Henceforth, this comic book all star has earned the prestigious title of The Great Vondini!

Sean…err…The Great Vondini has had an amazing amount of experiences that any chap would be proud of having in a lifetime, and he’s JUST GETTING STARTED. Mark my words, this man is going to be a star. If you have been following him on Twitter (@VonGormanArt) you no doubt have been witness to an assortment of varied wit, charm, and off the wall insanity that has become a mainstay for this colorful personality. The guy has had a run in with Robert Downey Jr., chained himself to a light pole, and escaped out of straight jacket. He’s just wrapping up a fan focused art contest, Vagrant Moron, that asks for participants to draw what Sean is doing when he is NOT Tweeting (check out my feeble attempt here). This fascinating fellow’s exploits have even caught the attention of Neil Gaiman himself, and if that fact alone doesn’t at least peak your interest then check out this exclusive StashMyComics interview with Sean Von Gorman! 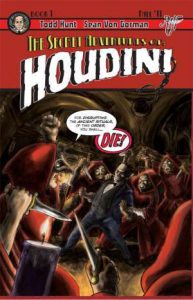 SMC: Welcome to StashMyComics.com, we are honored to have the Great Vondini on the site!

VG: It’s my absolute pleasure! Thank you for taking the time to humor me!

SMC: Your series Sock It To Me Comics is quite the joy to read. Nothing beats an anthropomorphic sock! What led you to use a sock puppet as a main character for this series?

VG: Sock It To Me is something I have been working on for a very long time now. It began as a comic strip in my college paper. When I was asked to do a strip I really had no idea what it was going to be. I started writing a strip where a woman was on an internet dating site and he was the thing on the other end of the IM chat. A star was born!

SMC: The shower scene in the web-strip was golden! Do you have a favorite Sock It To Me moment?

VG: I have several. Every single one. Most people don’t know that most of Sock’s best lines are things I have said to people in my travels. I’m a bit of a smart ass in public, and in addition to a short tolerance for bullshit makes for comedy gold.

SMC: I’m curious, how does Sock use the bathroom?

VG: The same way as anyone, he just doesn’t wash his hand after.

SMC: Is there truth to the rumor that Sock It To Me will make an appearance as a digital exclusive on Comixology?

VG: That is correct. Sock It To Me Comics has been picked up by Alterna and will be unleashed onto the world as a digital comic on platforms like Comixology. In addition, I will be relaunching the three panel web series which will act as supplemental adventures between issues.

SMC: The Secret Adventures of Houdini #1 is enormous fun! I felt a little Robert Downey Jr. Sherlock Holmes when reading it. Can you tell us what influences there were in creating this story? Any specific influences on art direction? 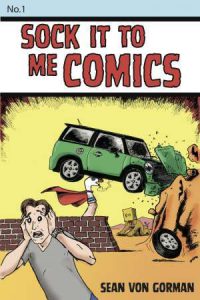 VG: To be honest we have been working on developing the book for the better part of four years now. The first book and the film were made around the same time. The writer, Todd Hunt, and I met while working at a hotel together. Funny enough the entire cast of Sherlock Holmes including Robert Downey Jr., Jude Law, Mark Strong, and the director, Guy Ritchie all stayed at our hotel while they were filming the New York shots for the film. Now during this time it was the first year the hotel was open and it was dead. There were no guests coming in and out, so we started to go a bit nutty from the lack of activity. It was during this time Todd developed this trick he would do where he would take a roll of clear packing tape, stick it under his shirt, and use a flashlight to illuminate it to make it look like Iron Man’s Arc Reactor.

Now one night as Todd is doing this in the mirror of the lobby in walks Guy Ritchie, Jude Law and Tony Stark himself Robert Downey Jr. from the restaurant. Todd quickly tries to hide what he’s doing but its too late, Jude has clearly seen what’s going on. Jude says, “Hold on, hold on! Rob get over here.” He called Robert over and tells Todd, “Alright do it again.” Todd, hesitant, sighs and says, “This is my Iron Man” and turns the flashlight back on. Jude and Guy are laughing historically as Rob stares silently with this look of “who is this guy?” Todd takes it out and shows them how he did it, Robert eventually warmed up and just started laughing a little bit. He then walked over to Todd and gave him a friendly pat on the back then a playful slap to the back of the head.

SMC: I remember enjoying a brief two issue story involving Houdini in the pages of Spawn comics. Do you have any favorite Houdini appearances in comic books?

VG: Most of Houdini’s real life stories have been the inspiration for most of what we write. We don’t have to make up a great deal to make a great story about the most interesting man that ever lived. He was the closest thing we will ever have to Batman. We are trying to put out the first comic to do him this kind of justice.

SMC: Recently, in a genius move to promote the book, you escaped from a straight-jacket on FCBD. Is this something you knew how to do to begin with, or did you learn how after becoming involved with the project?

VG: The straight-jacket is something I’ve been working on for a while. In the early days of pitching the book to companies I spent a great deal of time working on ways to have our project stand out from other books.

SMC: You are certainly one of the more dedicated promoters of creator owned work that I’ve stumbled upon. This has included chaining yourself to a light pole as well correct? Any other daring acts? 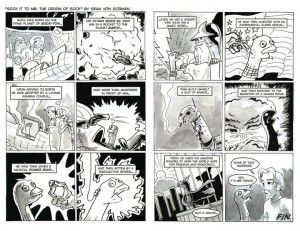 VG: Yes the light pole. Feels like so long ago now! The story behind that is this: After every company we submitted the book to passed we decided to self publish. We made the book how we wanted to make it, free of restrictions from anyone, and printed it. In our adventures of learning how to sell comics we were able to get a copy into the hands of Rich Ross who was then President of Disney Pictures. He had loved the book so much, he sent his copy to Marvel and organized a meeting with Marvel’s Editor In Chief Axel Alonzo. So holy **** we’re inside of Marvel Comics talking to Axel about our book. The most exciting thing before the meeting was that Axel had already seen the book and still wanted to see us!

We met with Axel who really enjoyed the book. He said he had read it three times and gave us extensive notes. Which was amazing he gave us a few great ideas for the book, but also reaffirmed that ideas we already had were good ideas so we then had official confirmation that we really had something special on our hands. Now after the meeting we were rushing to get an new edition together that incorporated some of the suggestion made by Axel into the book. As this is happening, Forbidden Planet contacted us to order books. At the time we had about three, and they ordered five! So we had to reclaim a couple we had given as gifts. Sorry mom, I’ll get that back to you!

Those 5 copies sold out the first day! We were beside ourselves. At this point we knew we had to do something BIG! But we had ZERO money to do anything a sane person would do. So I pitched the idea to Jeff Ayers the manager at Forbidden Planet who loved it. The rest is history. Here’s the interview I did with them while chained to the light pole! 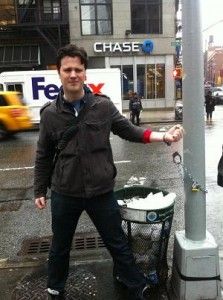 As far as future stunts, its top secret at the moment as we get permission to do things. Neil Gaiman says he wants to shoot me out of a cannon, so I’m pricing cannons at the moment.

SMC: Outside of promoting your book, what other crazy things would people be surprised to learn you’ve done?

VG: The thing people find most surprising about me is that I have kids. People who have heard about the things I’ve done stop and go, “Wait you have KIDS!?” My kids are the reason I do the things I do the way I do them. Almost two years ago now when we were expecting baby #2, I had been trying a whole bunch of different things my band, acting, art and I was spread too thin and nothing was working out. So I told myself I would spend one year focusing on my ART and if it didn’t work out I would stop and get a proper job to support my kids. The end of that year ended inside Marvel Comics. I figure I’ll keep going with it.

SMC: Do you have any upcoming gigs people might catch you at this Summer?

VG: The summer will be spent hard at work on getting Houdini, SOCK, and a few other projects ready for the fall. My next scheduled appearance will be at The Baltimore Comic Con in September.

SMC: Is there anything else you are working on right now?

VG: Right now I am working on a mini-series called Pawn Shop with Joey Esposito of 215 Ink’s Footprints, and he recently had a story in Grim Leaper #1 which you should check out!

SMC: Thanks for spending time with us!

To learn more about Sean you can visit his website and get a look at some of the work he’s done! Also, be sure to follow him on Twitter @VonGormanArt or Facebook so you can obsessively stalk him! Don’t worry, he likes it! And now, for the grand event! Check out The Great Vondini’s amazing straightjacket escape!

Crowd Funding Flash: Pawn Shop Back in June I interviewed the talented Sean Von Gorman, who eluded to an upcoming Kickstarter campaign in the works…