Dames. Dinosaurs. Danger. The tagline for this World War II comic book had me hooked before I even cracked the cover.  I mean, seriously – who wouldn’t love to see Indiana Jones take on the Nazis and a T-Rex at the same time? (Assuming, that is, that bad CGI and Shia LeBeouf aren’t involved… but I digress…)

Staff Sergeant Flynn (AKA Irish) is stationed with his troops in the Pacific. They are shocked to find a German army camp – and even more shocked when they are attacked by dinosaurs before they can notify 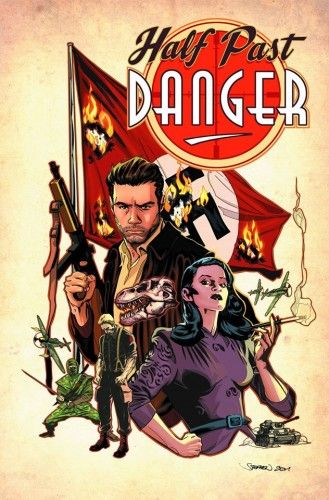 their superiors.  Irish is the only survivor. Fast forward to a few months later, Irish is recruited (after an epic bar fight and a little jail time) by British intelligence to help them find out why the Nazis are hiding out on a dinosaur infested island.  Surely this can’t be a coincidence.

Stephen Mooney’s story provides a cast of likable characters.  I immediately felt like they had been transplanted into a Raiders of the Lost Ark adventure (as previously mentioned), and I don’t think that’s a bad thing.  It brought a familiarity to the setting and story that allowed me to fully dive in, not questioning the particulars that fanboys (and fangirls) so often are left picking apart.  My inner seven-year-old (who vowed to become a paleontologist) would have liked to see a bit less dialogue and a bit more dinosaur action.  I am not ashamed to admit that I flipped back (more than once) to the panel of a sea-dwelling dinosaur eating a shark, always resulting in a huge grin on my face.

Mooney pulled double duty, and served as the artist for the book as well as the writer. His art was perfectly suited. I found myself pausing before I turned the pages, making time to identify all of my favorite dinosaurs.  His style reminded me of a grittier version of Frank Cho’s art – amazing creature action, with heroines (dames) who looked tough enough to take care of themselves, but still beautiful enough to be pin-up girls. The collected hardcover edition also had some bonus material in the back.  Mooney provided extra commentary on various panels for issue one. There were also some early concept and design sketches, as well as a cover gallery for the original single issues.

Of course, our reluctant hero and his British counterparts inevitably face off with the Nazis. Not everyone is who they claim to be. The final showdown invokes the giddiness of many an action movie fan – gunfights atop a train, stolen submarines, and (spoiler alert – ok, not really) someone gets eaten by a T-Rex. When all is said and done, Irish sits down for a drink, and toasts his fallen comrades. Cheers.