With Tom Taylor’s amazing run on Earth 2 for DC Comics coming to an end recently and with the impending release of the highly anticipated Superior Iron Man for Marvel Comics, I thought this would be a good opportunity to review one of my favorite Tom Taylor books: The Deep: Here Be Dragons. The Deep follows the story of the multi-ethnic Nekton family and their adventures aboard their submarine home, The Arronax. The family consists of father William, mother Kaiko, daughter Fontaine and son, Ant. You could immediately be forgiven for comparing this family unit to that of other family groups such as The Incredibles or the Fantastic Four and the comparisons don’t stop there. 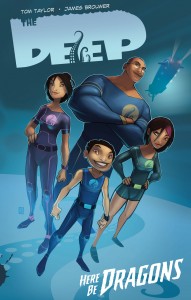 Taylor has positioned this book as an all ages story and there is a definite Disney-esque feel to the art and writing. The family is a tight nit unit and there are some moments of pure hilarity in the interactions between Fontaine and Ant. Similarly, the relationship shared between Ant and his pet Goldfish, Jeffrey makes for some of the best panels in the whole book.

The art duties in this book are admirably performed by James Brouwer and his work doesn’t disappoint. As I mentioned before, this book really has a Disney animation feel to it and in this medium, it works beautifully. Brouwer is very adept at managing the transitions between the lighter moments in the book in contrast to the darker moments which feature some of the scarier panels of what may lurk in the ocean’s depths.

Taylor should be commended for his writing on this book as well. The dialogue comes across as natural and the interactions between the family members don’t feel forced or without purpose. The wider conspiracy that runs through the story in this book is also intriguing and keeps the reader hooked until the final page. There is also a second volume available entitled The Vanishing Island with a third on the way some time soon.

It should also be noted that The Deep is published by a small independent press, Gestalt Publishing, which has its headquarters in my hometown of Perth, Western Australia.

All things considered, this book is a great adventure for readers of all ages. Getting a hold of a copy may prove troublesome to international readers, but the issues are available on Comixology for a reasonable price for those who are interested.

Parental Concern: Low. If you let your kids watch Disney movies, then you won’t have any issues with letting them read this book.

Review: Wytches #1 Fans of Scott Snyder may recognise his amazing work on Batman with Greg Capullo, but what you might not know…

Review: The Reservoir – A Moth City One-Shot Named to Comixology's "Best of 2013" list with his digital comic Moth City, Tim Gibson now tells another story set in the Moth City universe. The Reservoir …