As part of the Liberator trade paperback, Black Mask Studios asked a stellar team of comic creators to play in the world that Matt Miner created. Each team had the chance to create a short story using characters and ideas already explored in the first volume of Liberator, adding to the world and further looking into animal activism and rights. The collected issues combined with all the backups make the Liberator trade a huge collection of comics with a cause. All week long on StashMyComics we’ve been talking with some of the contributors to the Liberator trade, like Ales Kot, Fabian Rangel, Jr., Brian Level, and, of course, Matt Miner himself. Check out all the previous interviews here.

Today we sit down with Brian Level, who’s a busy guy. He does inking over at Valiant Comics on various titles, ink assists on Lazarus for Image, and does art on The Brothers James at Challenger Comics. Brian teamed up with writer Ed Brisson to tell the story Broken. 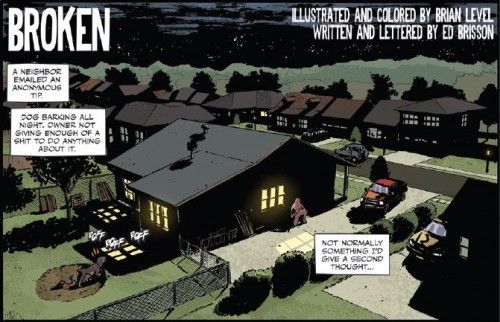 Brian Level: I was asked to work on the backup by Ed. For fun, we had done a little story over a year ago that (through Rachel Deering‘s graciousness) was placed into the IN THE DARK horror anthology coming out in April. I had a great time collaborating with Ed. He’s kind of a genius and tends to write pretty bleak material. Those two things definitely make me wanna work with him all the time haha.

So anyway, he contacted me about this Liberator short. I had read some of the book and really dug what Matt, Javier, and Black Mask Studios were doing, so I jumped at the chance. Black Mask approved me and we went for it.

LJ: You contributed the story Broken. What’s it all about?

BL: Broken is a story about Jeanette saving an animal! haha I know that’s obvious. It’s five pages so I don’t want to give away too much. I’d say it features a chain-reaction of bad things resulting from the abuse of a living creature and the fallout that can come from that.

BL: I do have a bit of experience with helping animals. Several years ago my wife started a nonprofit foster-home based dog rescue. It began with our house then eventually expanded into about 6 homes all over the northern Kentucky, Cincinnati, Indiana tri-state area. We focused on pulling dogs from high-risk shelters in Kentucky (particularly black dogs and Shepherds due to their risk of euthanasia being higher). I know we’ve had over 50 dogs adopted that have lived with us in our home alone.

We’ve seen how pretty much any dog just needs to find the right home. So many shelter dogs are killed because of perception or convenience (let alone the level of abuse and neglect that have been known to occur). Turning a blind eye as a population is just a huge moral misstep for us to take as human beings.

Ed’s story reminded me of a dog named Murphy that we fostered. His story ended differently but I was certainly able to attach myself to Broken because of that experience.

BL: I feel like almost anyone could find a reason to love Liberator. The story hits a lot of very genuine emotional beats that most of us can relate to while still giving a kick-ass story to hold onto. Matt and Javier knocked it out of the park and the rest of the shorts are going to be great as well! Black Mask Studios has a good thing going over there. It’s best that people take notice right away.