As part of the Liberator trade paperback, Black Mask Studios asked a stellar team of comic creators to play in the world that Matt Miner created. Each team had the chance to create a short story using characters and ideas already explored in the first volume of Liberator, adding to the world and further looking into animal activism and rights. The collected issues combined with all the backups make the Liberator trade a huge collection of comics with a cause. All week long on StashMyComics we’ll be talking with some of the contributors to the Liberator trade, like Ales Kot, Fabian Rangel, Jr., Brian Level, and, of course, Matt Miner himself.

First up is Fabian Rangel, Jr. and Jonathan Sawyer as they talk about their contribution to the Liberator trade, Unlocking. It’s a five-page story that delves more into the backstory of one of Liberator‘s main characters. 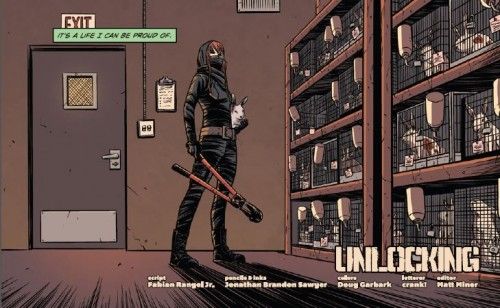 Fabian Rangel, Jr.: Matt and I have been friends on Twitter for a while, and I read Liberator as it was coming out. A few months ago Matt emailed me asking if I wanted to write a five pager and I was honored, so I said yes.

Jonathan Sawyer: I’ve known Fabian for a while and he brought me onboard. I think it was because our story has a scene where Jeanette goes to a punk show and Fabian and I are both big punk fans.

LJ: You two contributed the story Unlocking. What’s it all about?

FRJ: Unlocking is the story of Jeanette growing up and making the decision to stop eating meat. It was one of the easiest stories I’ve ever written because I pretty much just wrote about what I went through when I came to that decision myself.

For a few years now I’ve liked the idea that we all have great potential inside of us to be the best version of ourselves we can be, and to make the world a better place, even in small ways. So, yeah. That’s where “unlocking” came from.

JS: It’s kinda Jeanette’s origin story. It shows how her beliefs have developed from when she was a child to how we see her in Liberator vol. 1.

FRJ: Yeah. I stopped eating meat 6 years ago, and listen to a lot of straight edge/animal rights music. I’ve been edge since ’96, and have played in bands singing about animal rights. Writing this comic was awesome because I got to combine my two big creative loves; punk/hardcore and comic books.

JS: Not really…I love animals and I hate seeing them abused, but I wouldn’t call myself an activist or anything like that.

FRJ: Liberator is great because it shows that not every comic has to be overly muscular dudes in tights punching each other. It shines a light on a part of our culture most people don’t know exists. And they should know about it. Plus, the comic is awesome.