As part of the Liberator trade paperback, Black Mask Studios asked a stellar team of comic creators to play in the world that Matt Miner created. Each team had the chance to create a short story using characters and ideas already explored in the first volume of Liberator, adding to the world and further looking into animal activism and rights. The collected issues combined with all the backups make the Liberator trade a huge collection of comics with a cause. All week long on StashMyComics we’ll be talking with some of the contributors to the Liberator trade, like Ales Kot, Fabian Rangel, Jr., Brian Level, and, of course, Matt Miner himself. Check out all the previous interviews here.

Today, the release day of Liberator Vol. 1 in trade paperback, we talk with Liberator creator and writer Matt Miner about how the book came to be, the world of animal activism, and more. Lots of good information about the series and what to expect from Matt in the future.

Leo Johnson: To begin with, what’s the elevator pitch for Liberator for those who haven’t read it?

Matt Miner: Liberator’s a gritty vigilante adventure where the heroes aren’t beating up guys in capes and tights, they’re taking on real-world issues of dog fighting and animal abuse.  The story isn’t about animals, it’s about a pair of young idealists who will go to extreme lengths to further their cause.

LJ: Liberator seems to be your first comic work, as far as I can tell. Where did the idea come from and how does it feel to have so many people get behind your first project?

MM: There are real people who do the kinds of things that happen in Liberator, and when I learned about these men and women who put on masks in the middle of the night and go kick ass for animals I thought it sounded like the stuff of superheroes.  To see all the support that the book has received from retailers, readers and critics is amazing and it feels good because making this book has been a whole lot of work and I’m glad other folks are enjoying it.

LJ: Liberator, if I remember correctly, started as a Kickstarter campaign. How did the book make its home at Black Mask Studios?

MM: Well after I saw that Black Mask was putting out Occupy Comics it seemed like a no-brainer to pitch Liberator there.  They’re willing to put out good books that might have a bit of controversy attached. 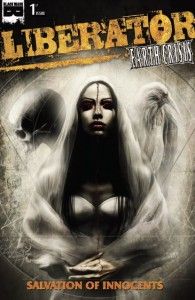 LJ: Liberator features often illegal and sometimes violent acts of activism. As an activist yourself, did you ever engage in the sort of stuff as Damon or kept it a bit tamer?

MM: Haha are you really asking me this?  The stuff Damon does is classified as domestic terrorism outside of the 4-color world of comic books. Why? Because apparently bombing kids with US drone strikes is the super cool stuff of patriots but smashing equipment meant to torture animals is a dangerous terrorist activity.

So to answer your question, no – my younger-days activism was all above ground legal stuff, though I’ve always been a strong vocal supporter of the men and women who risk their freedoms in the underground.

LJ: What was the process like of getting all the other creators on board for the Liberator backups and where did the idea for that come from?

MM: Well, the process was pretty easy, actually, since most of the people I approached are friends.  It kinda went like “Hey Frank (or Alex or Ed, etc), want to write a backup for the Liberator trade?  We’re paying real money.”  Boom, done.  Matt Pizzolo at Black Mask had the idea and I loved it – it’s been really cool seeing other people tell stories within this world we’ve created in Liberator.

LJ: Volume 1 of Liberator was fairly well-received from reviews that I saw (and I enjoyed it, personally). Next, you and Liberator are teaming up with Earth Crisis for another Liberator story. What is that like, as a comic creator, to be approached by a band to help tell one of their stories in your medium?

MM: When one of your favorite bands of all time comes to you and says “wanna make a comic book together that tells the story of our new album?” you say yes.  Seriously.

They were impressed by the first volume of Liberator – they loved the story and the art by Javier Sanchez Aranda and Joaquin Pereyra.  They’ve always wanted to do a comic book collaboration and I’m super psyched they tapped me for it.  It was a perfect fit and I’m really happy with how the project has come together.

LJ: After Liberator/Earth Crisis, what else can fans expect you or the Liberator comics?

MM: You haven’t seen the last of the Liberator characters, but they’re changing and evolving.  Vague enough?  I also have 2 or 3 other projects that will be real things in 2014 that I’m really excited about.

MM: I guess I just really hope folks will check the books out – Liberator/Earth Crisis: Salvation of Innocents #1 is in stores mid-March and Liberator vol.1 trade paperback with 50 pages of new stories told by super talented creators hits streets the beginning of April!