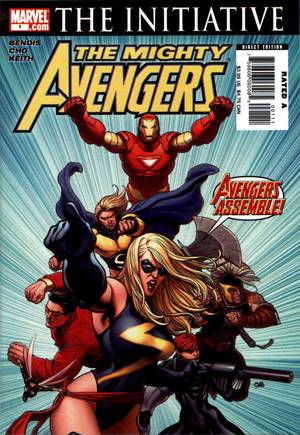 Now that Civil War has ended, the world needs the Avengers back. The New Avengers can’t handle the bigger threats to the U.S. because if a fight takes too long, Tony would just help with the fight then arrest them, so a new team needs to be assembled. This time, Tony won’t leave it up to fate, but instead will choose the team with the help of Ms. Marvel. They choose the Wasp and Wonder Man, two classic Avengers. The Sentry both for his power and his unstability (to keep an eye on him). The Black Widow for the “ninja” effect. And finally Ares, God of War: Wolverine and a Thor, wrapped into one.

Their first mission is to take down a bunch of monsters attacking the city, which ends up being the Mole Man. There are some good bonding moments as Wasp admires the Sentry, Ares admires the Black Widow and Ms. Marvel fights for control of the team with Tony. Mole Man believes they are attacking him, which is the only reason he broke his self-imposed exile into the underworld. However, the Earth’s weather system is simply going haywire, which seemed like an attack on his world. The reason for the attack turns out to be Tony, whose suit (and apparently his body) has now been taken over by a new (female) Ultron!

I like this team. They are extremely different personalities, all picked for their abilities, whereas the New Avengers team seems to fit much better, being much more friendly off the bat. This team will need to learn to work together and even to like each other. I was a little hesitant about Bendis bringing back the thought bubble, but it turned out to be a great asset to the story. There was a bit of continuity error when Wonder Man gets smacked away from the battle, then he’s magically back, then after that someone yells “Simon’s back!” as if he just got back, but other than that the writing was great. Frank Cho’s art is wonderful as always.

This team will be the public, crisis team while the New Avengers will serve as the underground, gritty team. Together they should both be pretty good.