Elle Peterssen is young, wealthy, and beautiful — and there is a reason someone tried to kill her. Only, Elle doesn’t remember any of this. MIND THE GAP, the new Image Comics series by the Eisner Award-winning writer Jim McCann (The Dapper Men) debuting on May 2, is a mystery with a paranormal twist. Elle, in a spirit form detached from her comatose body, must not only unravel the mystery of her attacker’s identity and motive but her entire life as well.

“I love the genre of the ‘whodunit.’ Psychological thrillers, murder mysteries, and film noir all influence me, and this story, heavily,” said writer Jim McCann. “It’s a preternatural story — something science acknowledges on the fringe but hasn’t proven yet.” 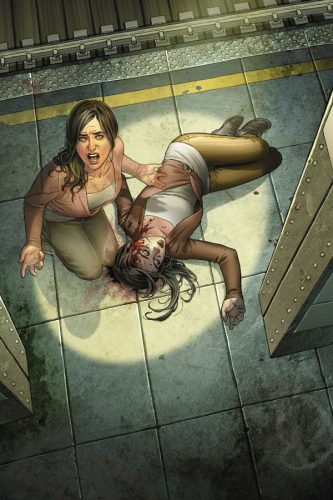 Between her family members’ and her friends’ perceptions of her, Elle can’t be sure which version of Ellis Peterssen is who she really was. But Elle must put together the pieces. Her identity holds the key to stopping her attacker before he can strike again.

“This is a book I’ve been excited about since Jim first pitched it,” noted Image Comics Publisher Eric Stephenson. “I feel like we really got lucky with this one, because Jim is a great writer and just a consummate professional, and Rodin — well, I’ve been admiring his cover work for ages, but that still didn’t prepare me for how insanely awesome his interior work is! Pleased beyond belief to be associated with such amazing talent!”

With gorgeous art by MORNING GLORIES cover artist Rodin Esquejo and colors by Sonia Oback, MIND THE GAP will trace the path Elle takes back to herself — and her would-be murderer. The art plays an integral role in uniting Elle’s disembodied experience and the real world, said McCann.

“This story will take on some otherworldly scenes, which the team handles beautifully, as well as some very real and gritty situations, sometimes even violent,” he said. “I wanted that to look as realistic as possible, and juxtapose it with the clean, beautiful atmosphere Rodin and Sonia deliver.”

MIND THE GAP #1 is a full-color 48-page comic book for $2.99 available for preorder in the March issue of Preview. It will be in comic book stores and digital platforms on May 2. A preview of the issue’s 9-page prologue ran in USA Today on February 22.