Up and coming comic’s publisher, Inverse Press, is hot on a streak of recent success. The publisher has had two successful Kickstarter campaigns to launch first issues of both Flesh of White and Roadkill du Jour and looks to add a third with the Flesh of White’s campaign for issue #2 showing a strong start (click the link and consider backing!). That activity alone would be enough for any small publisher to get their start, but Inverse Press is ready with yet another stellar announcement! Clown Town has been announced with a May 15 release via comiXology Submit!

From the press release: 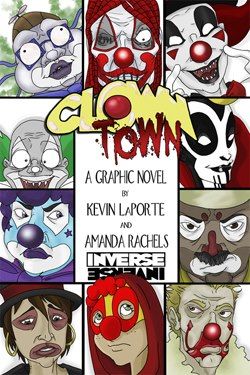 CLOWN TOWN – Where killer clowns are avenging spirits for abused children. Where abused children meld into the carnie masses, masked by twisted inner faces. Where young Chelsea Schroeder is left to her own devices in the search for her lost friend, Melvin. But Melvin may already be a part of the dark circus, simultaneously its beneficiary and its victim! And Chelsea may soon join him, unless she evades the clowns who just may be her saviors!

Inverse Press publishes comics stories of the weird and horrific from the minds of writer Kevin LaPorte and artist Amanda Rachels and their collaborators.  Active since 2010, Inverse has produced a variety of comics of different forms, including The Blind Eye, Clown Town, Flesh of White and Roadkill du Jour.

Kevin and Amanda are available for interviews by phone, Skype, chat or email, and promotional and sample art for Clown Town is available upon request, as is a digital review copy of the book.

Crowd Funding Flash: Roadkill du Jour There's a new project in town, and it features a troubled biker who rides the lonely road of the bayous while only…

Crowd Funding Flash: Kickstarter Double Feature The crowd funded comic train is still chugging along full steam ahead, most notably through the website Kickstarter.com.  I'd like…