We sit, believe it or not, on the eve of the Summer Movie Season ™, and the focus of this space will soon turn to Iron Man 3 and Man of Steel and… and… Thor 2? Kick-Ass 2? Are those coming out this summer? Wow, I’d better start looking those things up.

Before I do, though, I’d like to take a moment, just one, to look away from Geek Cinema and back towards raison d’etre of this site: comic books.

Ever hear of ‘em?

It’s well known: I long ago gave up on weekly issues. Don’t like the serial format of storytelling, don’t like the price point, don’t like the inevitable event books that interrupt monthly storylines. There’s been a convergence of incidents, however, that have brought me back to the monthly title in a limited capacity over recent days.

First: I am now the proud owner of a Kindle Fire HD, and buying and reading my weekly books in this tablet form is hella cool. There are limitations, of course. Marvel has gone full day-and-date digital on the Amazon platform via the Comixology app (Marvel’s native app isn’t available in the Android-based Kindle app store), and most indie and small-press publishers are there, too. DC, however, for whatever reason, has no presence at all on the Kindle. Not via their native app, not in the Comixology app, nowhere. It’s as though Superman and friends don’t even exist in the Kindle comics world. Why not? I have no idea, but I’d be willing to bet American cash money that whatever the reason is it has to do with… American cash money. I don’t give this no nevermind, though; I’ve always been a Marvel guy (it is what I make mine) so the missing Lanterns and Titans on my comics landscape don’t bother me. I wouldn’t be reading DC, anyway. 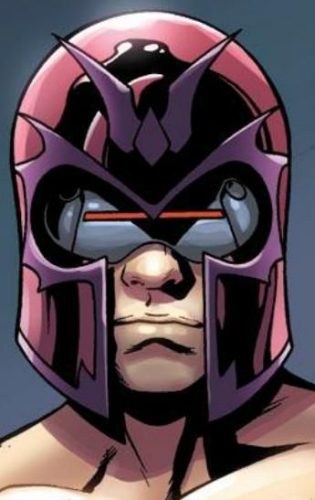 Second, and most importantly: there are two current Marvel books, the premises of which are so absurd, so unfit for an open-ended monthly series (and which just happen to be written by my two favorite working comics writers) that I just had to jump on-board, and yay for me that I did.

The first of these two books finally answers that age-old question: how do you make Cyclops not-boring? The answer, believe it or not, is to turn him into Magneto… and to throw the original X-Men at him. Including himself.

KER-POOM! (That was the sound of my mind being blown.)

When the Marvel NOW! initiative was first being promoted, among the characters featured in an early publicity shot was old-school Marvel Girl, Jean Grey rockin’ the blues and yellows. I only sat on the fringes of the debate over what THAT was all about, but I’m near-certain nobody guessed that she would be one of the five teenaged original X-Men brought by Beast from the past to the present to try and convince modern-day red-X’d Cyclops that he’d gone off the deep end. Brian Bendis may be at his best when writing teenagers, and there are few who do it better. All-New X-Men (which I wrote about briefly in our Books of the Year column) is based on a concept that seems to be better suited for a six-issue story arc than as the premise for an entire series run… but here we are. I hate time travel stories as a rule (so rarely do they satisfy their own internal logical demands), but the best ones get me to forget the rules and enjoy the ride, and I can tell you this: I can not wait to see what happens next with the teenager X-Men. SPOILER WARNING! Well, more like PREDICTION WARNING! This past week’s issue ended with a cliffhanger: who from the Jean Grey School is about to join up with Cyclops and his uncanny X-Men? I’ve got a cool ten bucks on Angel. Young angry Angel, not old crazy Angel.

The second book, easy to discern from this article’s title, does like All-New X-Men does: it takes an idea that seems like it would be explored in three issues or so and makes it the centerpiece of its own series. Sounds like a hell of a What If… ? book: WHAT IF… Doc Ock’s brain took over Spider-Man’s body?! Only it’s not a What If… ? story, and this screwed up version of Spidey is now and forever (or for the foreseeable future) the 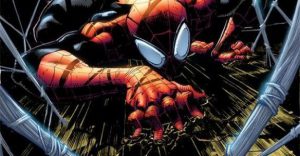 Spider-Man at the center of the Marvel Universe. Dan Slott’s Superior Spider-Man is like one of those old April Fool’s announcements they used to announce in the pages of Wizard (they used to do that, right?) Only it’s actually happening, and it’s the most interesting and engaging thing to happen to Spidey since BMB launched Ultimate Spider-Man. Otto Octavius, in his short time as Spidey, has both revolutionized and brutalized the way the wall-crawler does business. What makes the title work is the way Peter Parker’s consciousness is stuck in Ock’s brain stuck in Peter’s body, floating around in Otto’s subconscious all Rick Jones/Captain Marvel style. Pete has no choice but to watch in envy while Ock makes time with MJ, makes NYC love him, and comes up with crime-fighting ideas and tech so obvious as to make ghost Peter smack himself in the ghost head, wondering why he never did what Ock is doing. You know the old saying, though: you can put a psychotic murderer in a new body, but you can’t put… a psychotic murderer’s body… no, wait… an old murderer’s body… wait, that’s not it… you can’t take a body from a murderer… okay, well, Ock was crazy as himself and he’s crazy as Spidey. Ghost Peter can do nothing but watch in horror as the bad Doctor ruins his good name… and, next issue, go to the mattresses with the Avengers! 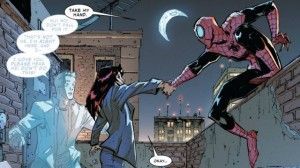 Both books have acted as a gateway of sorts for me, and I’ve since tried out some other books, with varying results. From All-New X-Men I’ve gone back to see what happened with Cyclops and Wolverine, going back to the very solid X-Men: Schism and on through to the superb Wolverine and the X-Men. If it was surprising to see Cyclops as Magneto 2.0, it’s downright stunning to see Logan as the new Professor X, and the most surprising thing of all is how well it works. I’ve also grabbed onto the new volume of Uncanny X-Men, because why not, and it’s solid but nowhere near as intriguing as All-New X-Men. Off of Superior Spider-Man I’ve started reading Avenging Spider-Man as well, and… that’s about it. I still read Ultimate Spider-Man in hardcover/TPB forms.

So I’m digging weeklies again, but on a much smaller scale. There are weeks, to be sure, where I look at my Kindle store and don’t buy anything. (I’ve also tapped into Powers: Bureau, but as always with the Powers-verse, I’m no better than lukewarm on it.) And I see the signs creeping in of event fatigue: the fairly useless Age of Ultron mini, for example, and the Guardians of the Galaxy and Thanos suddenly popping up all over the place. (Gee, I wonder why?) I can only hope, and it’s a longshot, that whatever company-wide mega-event is forthcoming (I’m looking at you, Infinity), my two books here are left alone to tell the fascinating stories they’ve started telling.

I doubt it. But is it really worth it, spending time worrying about the future? Ask the X-Men.

Geek Cinema: This Had Better Be Good This past Wednesday, Warner Bros. Pictures released the third trailer for their upcoming summer blockbuster, Man of Steel. This third…

Stash or Trash? Truth told, I'm not much of a “stasher”. I never bagged and boarded and hoarded because of the perceived monetary…