For awhile in comics, mostly DC, having a kid sidekick was the thing to do. Batman had Robin (5 of them), Green Arrow recruited Speedy (2 of them), Flash ran with Kid Flash (2 different incarnations as well), and then a whole host of other partners. Some of us like kid sidekicks, some fans think they are the most annoying thing in a comic. But, should superheroes really be recruiting children to fight against the forces of evil? Does trotting out a kid to battle Captain Cold or Two-Face sound like a good idea?

So if you want to know who to blame (or thank) for the influx of kid partners to adult heroes, you need look no further than Robin the Boy Wonder. His inception in 1940 as a character for younger readers to identify with spawned many more child heroes. And while he – and the other kids that followed – were effective at relating to a younger demographic, a case can be made that those young heroes are unnecessarily put in harm’s way. Marvel doesn’t really have any kid sidekicks, because a lot of the heroes they have were teens themselves when they began their careers. 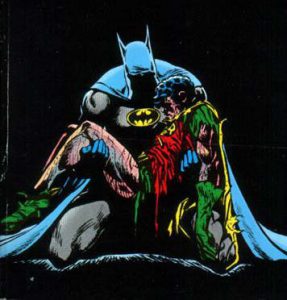 For the purpose of this exercise I’m going to throw out Supergirl and Superboy. They may be teens but they also have Superman’s abilities, and yes I know some sidekicks have powers as well, but nowhere near the powers of the Superman family.

With the amount of physical and psychological trauma heroes endure, bringing a child into that doesn’t seem like a good idea. Batman has probably the most psychotic and deranged rogues gallery in comicdom. These criminals obviously don’t have any problem fighting kids, since Robin appeared he’s battled them all. The second Robin, Jason Todd, was brutally murdered by the Joker. Sure Batman took him off the street, gave him a place to live and loved him, but allowing him to fight psychos was criminally irresponsible. The second Kid Flash, formerly Impulse, was kneecapped by Deathstroke. And there have been other injuries to sidekicks. I do understand the idea of training someone like Kid Flash or Aqualad to better control their abilities, but letting them go up against Mirror Master or Black Manta puts them in unnecessary danger.

However, these children are well trained and equipped to protect themselves. Also, most of the kids before they became sidekicks didn’t have the best life. Before Dick Grayson became Robin, he saw his parents murdered by a mafia boss. Before Mia Dearden became the new Speedy she was an underage prostitute. Cassandra Cain was raised without human reaction and speech, being trained just to be an assassin, before Batman took her in. So while they are in danger as partners to heroes, their life is probably better as a hero.

So what do you think? Should adult heroes have young partners assist them in crime-fighting? Does the fact that they are highly trained and taken care of offset the amount of danger they are put in? Let me know in the comment section.