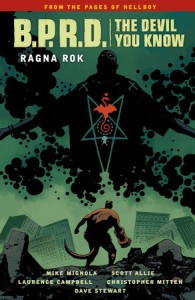 This is the conclusion to the B.P.R.D. series’ master story arc, 15 years in the making – and another conclusion of sorts for Hellboy, who first got his own Dark Horse comic book in 1994 – making 25 years of HELLBOY comics. So, then, this would be a good choice, if you wanted to read just one story arc, one comics collection, in either series, because you’ll know the Big Ending to both series.

I say this advisedly, because there’s stuff in RAGNA ROK that only hardcore fans like myself will truly appreciate. In fact, there’s stuff in this one that goes back to the first appearance of toddler Hellboy in England 1944. However, this is just as it should be : all of the story threads are brought together and resolved in this satisfying if not altogether cheerful conclusion.

Laurence Campbell’s art is just right all the way through – I can’t say it any straighter than that. He gets Mignola’s original aesthetic, and that same aesthetic has evolved under Campbell’s own pen. Dave Stewart is definitely one of the world’s greatest colorists, and this volume demonstrates it the same way all of his HELLBOY work does.

Star Wars Adventures Annual 2019: A Family Comic Friday… Review by Tony Dillard Some weeks there's just so much great stuff coming out that you can't put in into…