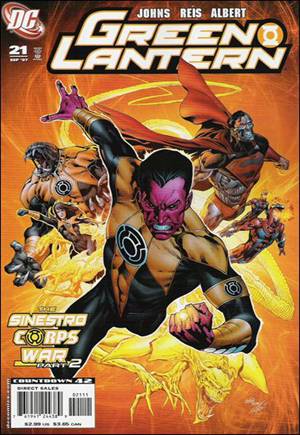 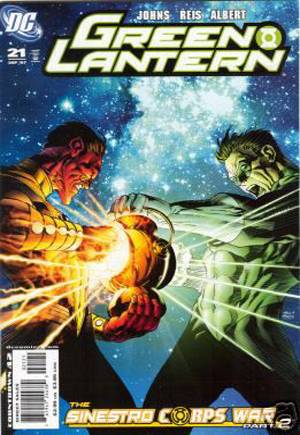 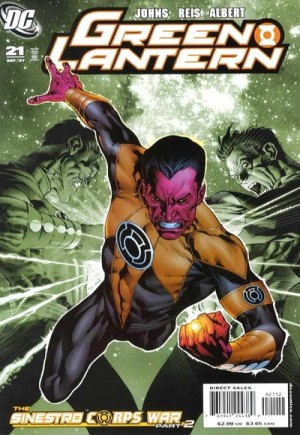 This issue marks the official start of the Sinestro Corps War. It begins with Hal Jordan recanting his rise, fall and subsequent rebirth in the Green Lantern Corps. After his tale is summated, the aftermath on the Sinestro Corps’ attack on OA is shown. All of the rings from the fallen lanterns are searching for new bearers, while the rings are counting the number of Lanterns that have been slain. Hal asks why it is still counting, even though the attack on OA is long gone. Salaak responds that even though the Sinestro Corps has left the planet, many Lanterns across the universe are still being slaughtered.

Hal spots Tomar-Tu lying under debris and moves to help him, but his attempts are quickly halted by the “Lost Lanterns.” Hal explains that the “Lost Lanterns” are referred to as such because they were the only thing standing between Parallax and OA, and that he defeated them and took their rings, leaving them for dead.

The Guardians are shown in the Hall of Great Service observing the Book of OA. Ganthet and Sayd both protest the current action of the other Guardians. The Guardians are about to destroy pages from the book. They are planning on removing the Blackest Night Prophecy from the book. Ganthet and Sayd stand firm that the prophecy will come to pass, but the other Guardians claim that the prophecy is nothing but lies fed to Abin Sur. Ganthet questions why they initially recorded the prophecy if it was just lies, and one guardian responds that it was because they felt fear; and with that, the prophecy is burned from the pages of the Book of OA.

After a fight scene showing that Sinestro Corps members can recharge their rings using Manhunters as Lanterns, the story shifts back to OA. Ganthet and Sayd appear to Hal Jordan as energy projections and tell him that once again, he must become a beacon for the Corps. They say they have to take leave of Hal, lest the other Guardians before they are suspicious and exile them both.

Guy Gardner and John Stewart are waiting for Hal by the Central Power Battery before they embark on their way to Qward. They attempt to charge their rings, but it appears that the Central Battery has been booby-trapped. The Sinestro entity leaps forth from the battery and attacks the lanterns. Hal is shown the memory he has of his father’s death, except this time he views it from his father’s perspective. Hal is shown to be a specter observing his father’s last flight. The conversation between Hal’s father and Carl Ferris is relayed detailing his final minutes. The scene shows Hal’s father keeping the plane away from crashing into the crowd, but his last words are muted to Hal’s ears. The end of the scene shows that Parallax was behind the entire facade. The issue ends with Parallax confronting Hal on Qward.

Good official kickoff to the Sinestro Corps War. The transitions felt choppy at points, but it didn’t take away too much from the story. It was interesting to see the dissension between the Guardians, and Ganthet trusting Hal to once again lead the corps was interesting as well.